I will say Im not a very big fan of turret targeting devices. It really opens up a cheesy exploit to cover a ship in Sentry Turrets to keep fire away from your other components. It also will creates unwinnable fights with CV combat, by targeting turrets you lose combat effectiveness really fast and end up not have enough firepower to fight

I do understand why it was implemented, to keep CVs from sniping bases. I wish there was a different way to solve that problem

After some testing on new 5.3 update thought i share my findings.

With this patch I think we are looking at a meta change on how ship are built and a possible end to being able to core other ships. Below is the same ship, the top ship was in a 1v1 duel on 5.2, the bottom ship was a 1v1 duel on 5.3 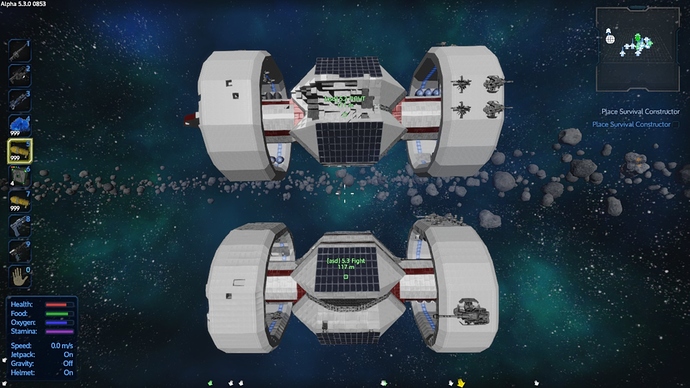 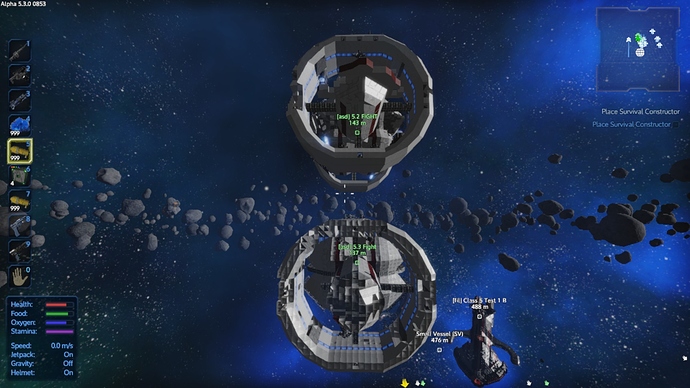 As you can see from the screens, In 5.3 coreing a ship will be almost impossible because of targeting the closet device the core will likely be the last thing targeted. The combat effectiveness really becomes an issue to with the loss of so many turrets fights become draws with no real winner.

A couple ideas to help cut down on cheesy tactics:

I know this is just first round of updates for targeting and I hope we will get to have the option to chose what a turret targets. Any way just my two cents.

Already done - you will see

Nice!
could you please share the coming limits? so we could already consider them in our new ship designs

Nothing set to stone for now. Only what might happen is a limit of 6 sentry guns.
Maybe today a new patch comes out and then you can test again.

This is what i posted on the official forms just want to post the update here also.

This is a video showing two different test in 1v1 combat: In this footage you will see both perspectives from the fights, Xanif’s footage is in the background and mine is top left corner.

In the first test both CV’s have turrets set to target only mounted guns and turrets:
My major take away from this fight is CVs now loose combat effectiveness very fast, if it wasn’t for the lag shot @ 12:00 min mark (Note: not one block missing around the core) or the studdering and loss of frames I was getting. The fight probably would of been a draw.

The second test was Xanif’s ship was set to target only mounted guns and turrets, Mine was set to only target Generators:
The theory behind this test was to see what would go first 50 guns or 18 generators. This test really proved that targeting turrets won over targeting generators. But the issue was the two lag shots (Cockpit Lag Shot @ 14:10 and Core Lag shot @ 19:10)

I would of liked to have tested more but three lag shots in two test was very discouraging.

Just a few details on the tests:

My final thoughts are Bases and HVs be allowed selective targeting and CV turrets stick to Core targeting.

I hope 6.0 brings an end to the Lag shots and a few changes to the current targeting system.