What happened: 1. When I did my fa:supply my laser pistol turned into a multitool, I still have the ammo. 2. I tried to use do:rp:xl and it said I need 5 RP (I have 5 RP)
Player(s) with issue: Skard
Server: NA
Time (cb:time): The gun-to-multitool happened yesterday, the do:rp:xl = Monday 17 September 2018 just before 22:59
Playfield: Freelancer Cryo
Structure Name(s): None
Structure ID(s): None
How can we help you now: Replace my fa:supply laser pistol and either change the code on the do:rp:xl or just drop off the contents to me

I don’t understand your ticket.

When I moved the laser pistol to my toolbelt it turned into a multitool. I have 5RP according to Player Stats.

Also the first image you show isn’t my account, I haven’t warped yet “Received 2 RP for warping” and I have acquired 2 containers for RP not 1. I do have my faction weapon on me - your screenshot confuses me.

What Rex first screenshot is showing:
Its your backpack “after” you did fa:supply. It shows your pistol in your backpack (not in you toolbelt). So nothin was replaced. That pistol is even in there 10 minutes later.
So FA:Supply did not cause that.

What I see and maybe you think about that is:

and then one minute later:

But why, I don’t know. Either you put it into a box and got the rest out of a box (like the other items) or its a game bug. But either way we can’t replace the pistol then.

Not sure why you mix 2 things in one Ticket, but thats what confuses here.
Anyhow. I don’t know when you tried to get that second package, but you reached your RP only half a day later (then your suplly)

I see, thank you for clearing up the issue. So then that should mean I can do the do:rp:xl now with no problems?

I appreciate both your and Rex’s time

Your welcome.
Yes it should work now

So just logged in to try do:rp:xl. Here is my screenshot: 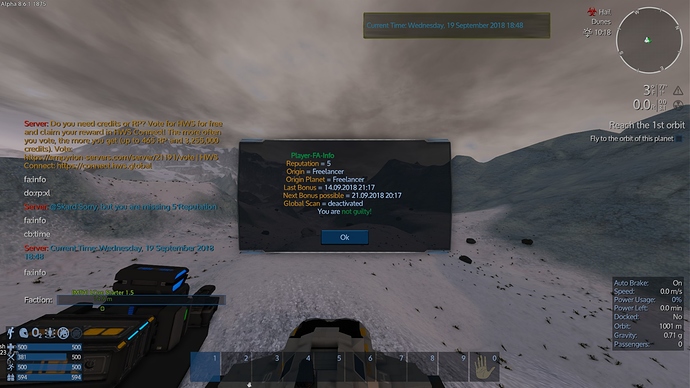 Still not working. Any help would be appreciated.

The problem is: You bought it in the last season where it still cost 10RP. Therefore its still 10 RP

Can you fix the code so its same price for everyone?

The code is ok. Everyone who bought it in this season gets it for 5 RP.
If you buy one now you also get it for 5 RP. But you bought it end of May.

I have a lot to say about this (I’m in the middle of a long hard move from last house to current house) but I’m tired and don’t want to say something I’ll regret later so I’ll make this simple.

It is inequitable and unfair for the in-game cost (RP) of a feature veterans paid for in seasons past to support our community to be required to pay double the RP that new supporters and new players get for a lower in game cost. I never used the feature because once I got off a starter planet I wouldn’t need it (I’ve not used it once I don’t believe). The feature is permanent which means the value of the feature should be equal to all players. I didn’t win the feature in a contest, it wasn’t given to me because you like me, I paid for it like everyone else.

This would be the same as letting new players pay %50 less for Orbital Auto Miner levels or OCD levels. (all permanent features.) I do not have a challenge with the reduction (whatever your reasons are), but if you are going to reduce the RP requirements to be fair to every player you have to reduce them for all of us.

I know there are vets that have played longer than me that have some really sweet feature limits (grandfathered in) and I’m fine with that, but different RP requirements for vets contrasting new supporters is like being Grandfathered OUT. That just doesn’t make sense.

Ok I don’t think I said anything I’ll regret.

Thanks for taking the time to respond to me about this subject.

thanks for letting us know that its more important for you. I was not aware of that.
I understand you and I see your point with the different season.
The main problem for us is (why I did not offer it in the first place): We would have to change it for all, as you said. That means a lot of manual work… or I have to build another function for it. Usually this does not happen so often (since most use it directly)… so building a function for me looks a bit overpowered for now.

I will change it for you and see if more will speak up to have it changed. Then we decide if we do it manually or build a function.

Thanks again! Also that you said it in a nice way

That’s very thoughtful, you have my gratitude. And thanks for the compliment.

its a single use item, not repeatable.

you have to buy it each time you want the resource package, so it would have only been that first one that would have cost you double.

Glad you got it sorted though,