What happened:
=>This is the second day in a row that our faction and allies have been taxed for structures going over the faction structure limits. We are trying to manage this but the game does not allow for acceptable monitoring of these limits and the warning system id frankly not sufficient to manage this effectively. This is hitting new players very hard and needs to be addressed.

How can we help you now:
=> Either just prevent the structure from being placed in the first place / Better monitoring system of faction structures! / Only impose the tax on the faction creating the structure that is taking the structures over the set limits. THIS CURRENT TAX SYSTEM IS NOT FAIR ON NEWER PLAYERS WHO CANT AFFORD THE TAX!

Agreed with everything mentioned.

Hey, I think you mix up 2 things: Tax: Only for structures left on taxable Playfields. Only your faction will be punbished and this is something your faction mates have to be taught. I restored the Tax of one ship that was Taxed multiple times, but it did not really cost you guys much. Structure limits: Only the latest created structures over the limits are taken. So the one punished should be the one that went over the limit. Warnings are given to all online players connected to the limi… 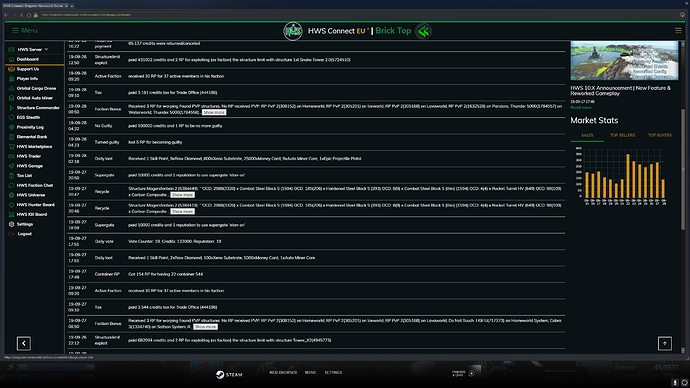 Jascha I am pretty sure that both of the taxes were ally placement and we were taxed too!

Agreed. Same thing, multiple times this week and I can’t even find them in the structure commander or what planet they are on to go and fix it. If it an ally that is doing it, that is a punishment of the wrong people, we are allied with many different factions and we are not the police of them or their structures.

A new person getting taxed over a million credits within 2 days? God I remember struggling to make 1 million in a whole season before I knew what to do or where to go for trade.

Jascha I am pretty sure that both of the taxes were ally placement and we were taxed too!

Thats what I just showed you. Its not true. But as Byre showed, its about something totally different.

Thanks for the logs. As said, you need to be clear because you mix up different systems. The one you mention now is a totally different story even. In General: Please always point to such logs from the beginning. Saves us much time.

I’ll check that later, since I’m also not sure right now of whom such exploit tax are taken.
But if someone is exploiting the system like that then price is high. 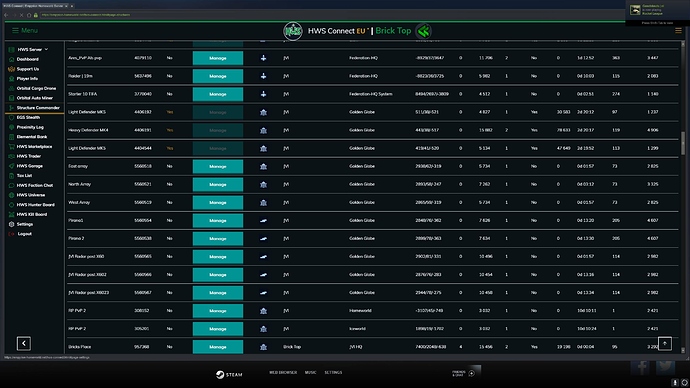 Sorry about the crossed wires when i said tax i meant ‘Structure limit charge’ or whatever it is. In my mind its still a tax.

There’s over 100 people in our alliance sometimes.
These charges deleted 50 million credits from our faction alone, in total probable bled 200million+ from the server and hundreds of rp when our faction did nothing to cause it.

You could at the very least change the wording to say that it is due to an ally we are being taxed and ideally tell us exactly who caused it.

Frankley one noob coming into a group should not be able to wipe out such a vast amount of wealth in a single error.
Especially when that noob ISN’T EVEN IN OUR FACTION!

I dont see the structure on my structure commander either. Maybe because was private and only the guy who planted it can see it? Maybe thats why also allied faction are taxed (private causing some kind of bug)?

Yeah Paxxo, I talked to Marius when it happened. There was no way for him to see that we already placed down three bases. By the time we figured the whole thing out it was already to late.
The rule maybe good for balancing, but the mechanics of how it’s forced down are just irritating and way to uncomfortable. Best imo would be if you simply could not spawn any more structures once the cap is reached.

Hi Server admins, could you please look into this as clearly it is an issue with the current system of penalties, it could be used to bankrupt another faction in an alliance and as thus an exploit. For us however it is just a simple misunderstanding, either remove this feature or find us a workaround. A response to this issue would be give reassurance to those affected.

This system has been in place for as long as I can remember, 5+ seasons I believe… It is to prevent exploitation of the alliance base limits on PVP planets (GG). I have been affected by this a couple of times although it has been a while and yes, it does hurt the wallet! The price is a bit steep in my opinion but it sure helps one not forget. Everyone in the alliance that is online when there are more than 3 bases down on GG gets the warning. A workaround is communication; just ask the other factions in the alliance to check registry and see if any bases are on GG before you lay one down… Although that has failed us before, it works most of the time!

But as it has been argued here for new people or new factions this is crippling specially when there is a language barrier. There should be a plugin in hws connect or in game if this system is to continue, as being unaware of what each faction has isnt fun. As a new player to HWS i feel that being punished this way has already made me rethink my options about playing on this server. If this continues i will just go back to renting a server with my friends and doing my own thing, being punished for other peoples actions is not on specially when noone can tell who is at fault.

@Jascha is looking into it.

This isn’t the technical truth but more your gameplay decision.
The most important thing is that the leader knows exactly what allys he accepts or not (@Firebeard)
In your case with hundreds of faction + ally members this is your responsibility.

For now it is indeed a bit limited to only chat warnings - which were ignored in this case and communication with the guilty guy on Golden Globe not being made.

We will work on a better way to display it on HWS Connect.

So what we changed for now (will be updated tonight):

That way you should be able to contact the one causing the problem and also know why you got taxed for an exploit.

I’m sorry but this really isn’t good enough in my opinion. To say,

“The most important thing is that the leader knows exactly what allys he accepts or not (@Firebeard)
In your case with hundreds of faction + ally members this is your responsibility.”

This is not an issue of choosing alliances it’s an issue of an unfair charge imposed on factions that have ZERO control over a base / structure they did not place. As i and Brye have stated this has hit the newest players hardest and is unfair.

In addition is NOT our faction owner’s ‘Firebeard’s’ responsibility to manage the actions of another faction member’s actions. In light of the limited monitoring and limitations of possible actions that the rest of the individuals charged have to rectify this. The charge should not apply to all in the alliance.

I would ask a reimbursement of this charge on behalf of the new players. Also I did not appreciate Jascha’s instant dismissal of my initial post in regard of my incorrect terminology calling it a ‘Tax’. I was totally clear it was to do with the structure in the structure name and ID i had provided. A charge is a tax! Have some flexibility in future please.

I appreciate the efforts to change the warnings but is it a stupid question to ask why not prevent the structure from being placed in the first place if it is exceeding the limit?

You are generalizing my words without context.
My context was referring to the quote I posted above, nothing more or less

I understand your context though and we try to improve it and already improved it as fast as we could.

The charge should not apply to all in the alliance.

Well, think about this for a second again. Or let me help you:
After Alliances got implemented in Alpha 6+ and faction sizes grew on HWS, more and more players realized the potential with them.
First, they were exploited to circumvent offline protection, so they spawned ally structures with offline protection around the main faction base.
After we tackled this with a distance rule (after tons of drama), new ways of exploits came.
Splitting large factions into multiple small factions and ally up to circumvent the global limits.
And so on.

Your request to not apply tax or anything to allys might help few little new guys, but damage the hole PvP scene by the steps mentioned above.
An Ally system is just not a trivial thing as some think. An ally system, like in real life, is a careful chosen and maintaned thing where all need to know what is going on where at any time. At least this is what Empyrion is limited about with such low permission system or API possibilities we have for Alliances.

Anyways, to sum this whole situation up:

Option 1: all of you knock on the exploiters door and ask him for the money he “stole” from your new guys.
Option 2: You try the “admin” deals with it way

And we helped you now with more log output. Basically the thing which was possible from your initial request:

Either just prevent the structure from being placed in the first place / Better monitoring system of faction structures!

We hope this will help in the future.

why not prevent the structure from being placed in the first place if it is exceeding the limit?

Because we have no direct access to the game code. We can only work with “post-active” solutions. Once action X is done, we react on it and do action Y.
This is the technical API limitation we are in. And as @0z pointed out: we have this system for years now and everything is fine IF this is being respected and understood in the first place - which brings me back to Option 1 I mentioned above.

Thank you for your reply Rex. I understand this is not a trivial thing and this must be challenging to find a balance. Although I do not completely agree that there aren’t other less aggressive measures to prevent structure exploitation for bigger alliances such as ours. I still believe that the penalties imposed in this case should be reimbursed to our faction members as gesture of good will, due to the fact we did not place the structure and the absence of warnings we got and ultimately were unable to instigate a change to rectify the structure exceeding limits.

We are always looking out for good will. But in your ticket you only mentioned you with issue:

We don’t know who got all affected by this. And we also can’t refund hundreds of players accounts, I hope you understand.
The best way would be as I said above: knock on the guys door who caused all of this. As far as I know, he knew what he was doing!?

this case should be reimbursed to our faction members as gesture of good will,

I already reimbursed your factions tax for a ship that was left on ECC for a multiple days, since both tickets did not mention any specific instance.

Whatever is missing due to the Alliance Exploit you can ask RED for (which was also not much: a Total of 668333 credits for ALL in the Alliance.