Frustrated, nowhere to go, nothing to do

started playing last saturday, it’s been almost a week.
starter planet was impossible, even finding a place to build a ship was hard, there where no resources and I was lucky to have my inventory full of things from the tutorial, I had to kill whatever I could find until lvl 7, built a ship and went to aliance HQ, which was full, so I 3 RP to do the planets scan and decided to build on one of the peacekeeper planets, today it’s appearing on the red warning about being taxed, so I need a new place to go, every poi I find is done, I know they reset every 3 hours but still didn’t found anything, the only fuel node I found is like this https://puu.sh/AJoML/6ab45a01c2.jpg.
there’s any place I can go to build something or do something? really, it’s been a week and the only thing I’ve done is to kill animals and trying to find pois with something or ores to mine, the motocycle doesn’t work, the game is laggy and I don’t really know what to do anymore, tried the discord, finding somebody to join to do anything, but people doesn’t answer most of the time, I’ve stick to the pve part of the map
https://forum.empyrion-homeworld.net/uploads/default/original/2X/6/6bd3be2d36f5a4893f9360e761a99fb6a2c7dba4.png

should I build some workshop CV? somebody told me it would be destroyed by drones on PVE space, is that right?

TLDR: can’t set a base because everything is full and taxed, can’t do pois because all are completed, and I’m running out of fuel, don’t know what to do or how to play

Feel free to look more closely into everything. 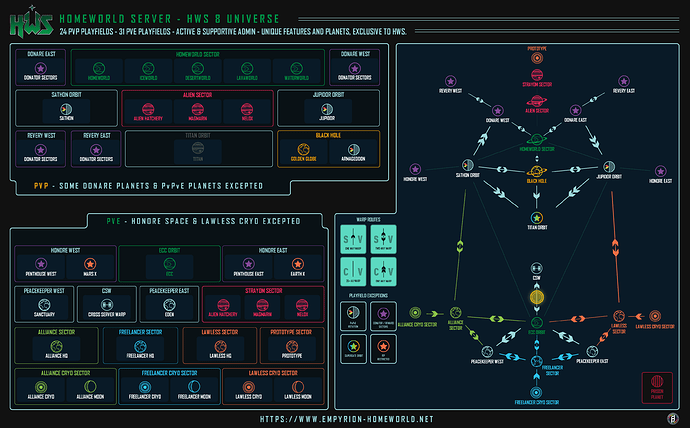 I’m sure you will discover why 90% of the other players still enjoy HWS.

I know how you feel. When first starting on the server its a tough time getting yourself established. If youre having a hard time finding prometheum for fuel then you can supplement with bio fuel. build a simple hv and harvest a lot of trees and crank out as much as you can. use that to explore around. you can get a simple sv built and load up with miniguns and go to armageddon during the pve part of the rotation and kill mobs but avoid the drones. do that until you hit max lvl and unlock everything. try hitting up the new planets at the top of the map in the strayor system. they are class 5 planets so you will have plenty of space to explore. work to getting some credits and buy some orbital autominers, do the prometheum one first if thats what youre most desperately needing. you get a miner core a day and they fuel for 3 days. you will get there eventually, its a bit slow to start but youll get there.

I understand your frustation. When I started playing last january I had some problems too. The problem now is that we had a big change from 7 to 8 and Rex advised us that we should expect some problems. Don’t give up for now. Read the guide (all of it) and try to understand how HWS works (bank, autominer, OCD and much more). Regarding the POIs, I’ve been wandering around Freelancer Cryo and found a lot of POIs full of loot. I’ve done the Prof. Voids and the caves quests (although I didn’t figure it out what is the Cav-Ex SV for

) . The only problem I found was the wave of drones spawining above my base when logging in. Moved to space close to the market. Keep it up.