HWS turns 5 years old! Thank you so much HWS Community for that! 🙇 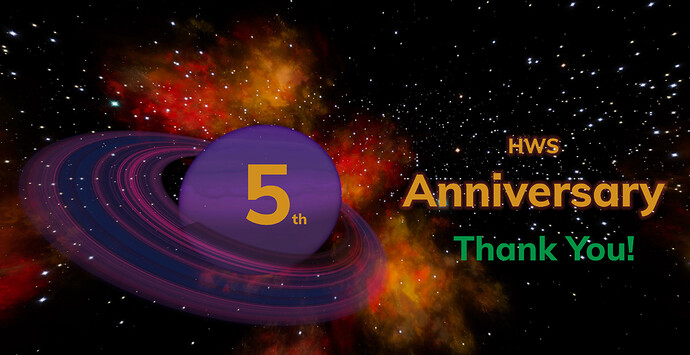 I have a Déjà-vu writing that title but it’s true: HWS runs today for 5 years straight.
Or let me describe it a bit different:

I could go on with those stats but they are not just numbers to me but really a huge, unbelievable achievement to all of us. You, playing on HWS. You, helping us with tickets and feedback. You, supporting us and making this reality.
Loyal players know this by now but I would have never thought 6 years ago I would ever do such a thing for living. And even 5 years ago I was just curious, what is possible in Empyrion Multiplayer and trying out few things, you know…

Of course, especially a huge thanks to @Jascha, who is with me as well since 5 years and enduring my ideas, game bugs and log crawling sessions. I would have not come so far, without him!
Along the way many great people came and go but in the end, it’s all possible because of you, the HWS Community. I really appreciate you guys.

5 years are often also a turning point. You reflect stuff. You plan stuff. Or the typical job application question goes: “Where do you see yourself in the next 5 years?”.
It’s hard to say really (considering the last 5 years were totally blind) but I for sure want to be more creative and develop games for people. And this is basically what I do with HWS.
But I also want to prevent more conflicts and things, that interrupts me developing games.
I have plans about that and big plans what HWS should be at least at the end of 2021.
I hope to see you around and keep following this HWS journey. It would mean a lot to me!

As always, a bit late today, but the Anniversary Sale is live. 20% discount on everything here:
https://empyrion-homeworld.net/support-us

The sale will end on Friday 11pm.

We are also excited to launch a third server and observe you playing on a new scale in terms of Scenario and HWS Features. It’s a bit like 5 years ago, where an idea, can get improved and grown.
That means that at the beginning, not everything from HWS EU/NA could be merged to the HWS RE server, the Stargate Missions and some Quests need more effort, because the Scenarios are not compatible. But I plan to add them there too, especially if I see it gets popular.

So the best TL;DR of HWS RE is right now:

I plan to start the HWS Reforged in about 1 hour.

Thank you so much for reading, for playing on HWS and for just being part of the Community.

Thats sound good. And i hope now will be more PVP on old servers for true surviver…

Just wanted to say congratulations, happy anniversary, and thank you! You, and those that walk with you in this journey, have made it all an incredible experience. I am so happy to hear that there will be content from not only your overall game enhancing features, but also your PvE into reforged eden. I very much enjoyed going through them this season on HWS. I look forward to this new server’s evolution, the experiences with the community, and to the future of HWS. Thank you all for making it great.

Can I buy more than 1 of these and keep 200 or 300 or more permanently? It looks like I can in the cart but I want to be sure

No, it’s only once and does not stack.
Linked Infos here:

This topic will contain a table of contents HWS has an active Economy and players are allowed to store their credits independently from the game. This convenient and valuable feature is called the Elemental Bank. Credits are very important because they allow players to purchase increasing levels of HWS features such as the Orbital Cargo Drone, Reputation Points from EGS, NoGuilty status, EGS Recycle Levels, Orbital Autominer upgrades, HWS Garage ships and more. The main branch of the bank is…

Got It. Thx. Happy Anniversary. Keep up the Great Work

Nice to see three HWS Server running and even more work to do now.

I noted an issue on the HWS Reforged Eden server though, that people couldn’t resist to grief=kill others in PvE with the Chainsaw or Status Effects, the Creators have implemented. I removed it on HWS EU and NA long time ago but I won’t touch Reforged Edens Core and instead hope for human kind and people respecting our rules.

However, if repeated griefing (griefing = not arranged Chainsaw events i.e.) keeps going on, you will be insta banned from HWS RE without any chance of coming back.

Play fair guys.
Reminder: If you search for PvP: go to the center of the HWS RE server in Black Hole or Golden Globe. Or even better: play on HWS EU / HWS NA for proper PvP.