I need help please - Base deleted

What happened?
=> My friend and my faction base was deleted. I believe there is a bug in the cb:wipe command that led to us losing a significant amount of resources.

On which Playfield?
=> Freelancer Journey

How can we help you now?
=> My hope is that either the base and resources can be respawned or at the minimum, the stockpiled resources could be replaced. These were fairly significant, representing about 3-4 days of Big Tino’s time and a week of my own.

More information: My friend (Big Tino) and I started approximately 1 week ago. We were aware that there was supposed to be a 1 week timer on structures de-spawning and planned to leave the planet before then. Unfortunately, Big Tino’s computer encountered some significant issues requiring him to take it into the shop, and it has not been fixed yet. We checked the HWS guide multiple times to try to find confirmation and could not find any explicit statement of that rule. I’ve been checking cb:wipe daily to make sure that our faction structures didn’t seem to have an imminent wipe, and every day they have said 6d and some number of hours. We had also asked an admin who was online (Dr. Dark) about playfield wipes and were assured that any wipes would be listed on the cb:nextwipe output. Nothing from that chat command mentioned Freelancer Journey, so we believed our structures/resources safe by every method available to us. I continued to maintain the base with its farm and collect resources to put toward a larger ship for us both to leave the world when Big Tino’s PC was fixed.

If I had realized that cb:wipe was inaccurate, I would have either left the world sooner or moved all the resources to my factory. for safekeeping. I appreciate your consideration and am happy to provide any logs that might be available in support of the claim.

A screenshot of that would be good. @Jascha could check / fix it then.

Cause yes, this was the reason

I restored the base for now.

Thanks so much for the unbelievably fast response to this. Here is a screenshot of the current cb:wipe output. Of note, the Vagabond is a renamed version of the free spawned vessel, which Big Tino modded a bit. The Baldur is a small CV that he spawned in probably 4-5 days ago. 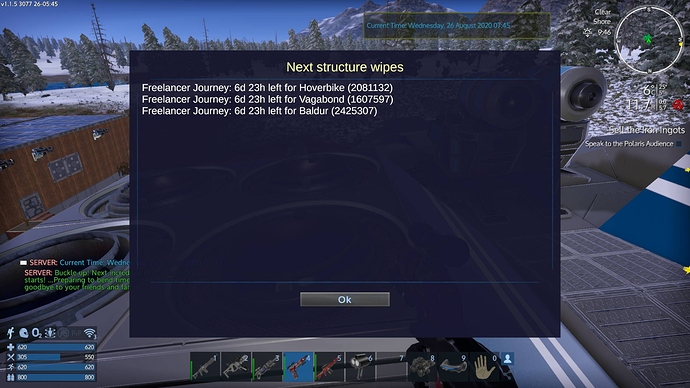 Now that the base is respawned, when is it supposed to be deleted? Just so I can plan and get everything off planet ASAP (I won’t have the time to do so tonight).

Thanks again for this. Big Tino and I are in awe at what is probably the best customer service we’ve ever seen.

Since I respawned it, the “clock timer” is reset and you have another 7 days to leave the Starter Planet regarding the base.
This does not count for your ships though which are pending of removal in some days.

Thanks again for this. Big Tino and I are in awe at what is probably the best customer service we’ve ever seen.

You’re welcome, glad I could help

This does not count for your ships though which are pending of removal in some days.

Totally understand. Hopefully Big Tino’s computer will be fixed by then but with the resources, we can make a different ship to leave.

Thx for the screen. Could you take another one now and check if the time changed? I will take a look at the timrr.
Thanks for the report

I ended up scrapping the other ships because I didn’t know what their despawn timer was. For some reason when I tried typing cb:wipe on log-in with no other structures/vessels, it wouldn’t display anything. I then spawned in a small HV and cb:wipe worked again but you can see below that the timers seem inaccurate for both, since this is literally seconds after the new HV was spawned but about 18 hours after Rexxus respawned our base last night. 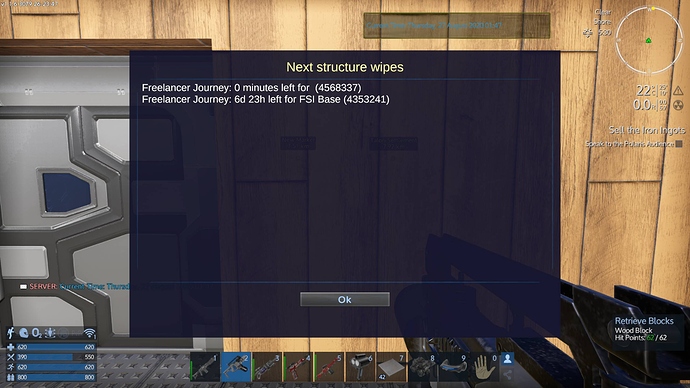 hm ok. Will check it again. strange. I found one issue, fixed it but the rest looked ok to me. But now my testdata should also be better after a day…

For whatever it’s worth, the cb:wipe timer reset again today. It seems to be resetting when a structure is touched, but that doesn’t sound like it’s supposed to work that way on starter worlds?

ah good hint. thank you. Yeah I think it overrides the message with the tough timer…

Thank you, That was the issue. I will fix it and update soon… after 2 or 3 years