Kicked from game in space

Warped into asteroid belt, got kicked with following error and when I logged in I am 5km+ from my CV and get kicked every 2 mins or so. 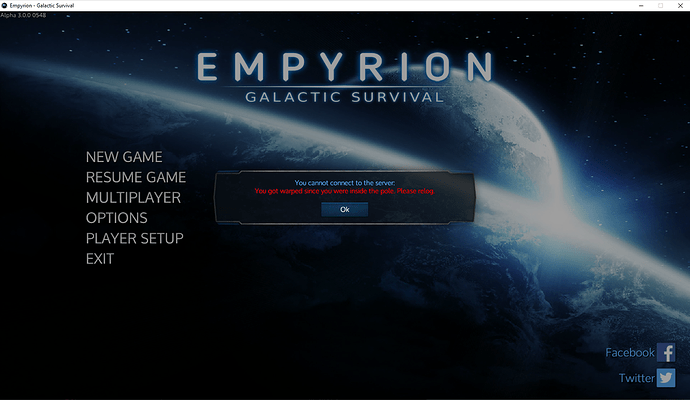 I have also been kicked with a green zone error.

I just had the same problem. I was flying to the astroid belt from phobo and they exact some screenshot came out. It warped me far away from my ship and I was forced to land on Mars in just a space suit. I lost my sv.

having the same bug. i was at a sath asteroid outside the sv and then got kicked. now lost in space outside the field, after moving 500 m same error kick. saw other ppl lost in orbit with same problem there. cant get back to sv had 10 kicks with reset to same position, hope it is fixed tomorrow.

this happens to me every few minutes. starting to get old lol

Is there any way to fly to the astroid field without this happening in a sv?

Was this over night - the last 6 hours still hapening?

after it patched at around 23:30 with a new build i tried again and didnt get that kick in orbit, looked fixed. too bad sv is destroyed now

maybe need a ride back to mars tonite.