Lost resources during OCD Get

What happened: Lost 5000 units of refined pentaxid
Player(s) with issue: Lizann
Server: NA
Time (cb:time): 20 Dec 2017 approx 08:20
Playfield: PKW
Structure Name(s): Home
Structure ID(s): 1011318
How can we help you now: Pulled a few too many items down with OCD command, I was alone in a private base, so started dropping stacks to make room in inventory. Was able to recover the Raw Plastic but didn’t get the 5000 units of refined pentax. If you’re able to confirm that it left OCD but never arrived in my inventory, I’d like to have the resources restored to OCD.

sorry, we cant help with that. its your responsibility to ensure you have enough room in your inv - hence warnings …

while DeeExpus is right in the logical consequences of your actions I want to pin you to a second problem you overlooked: 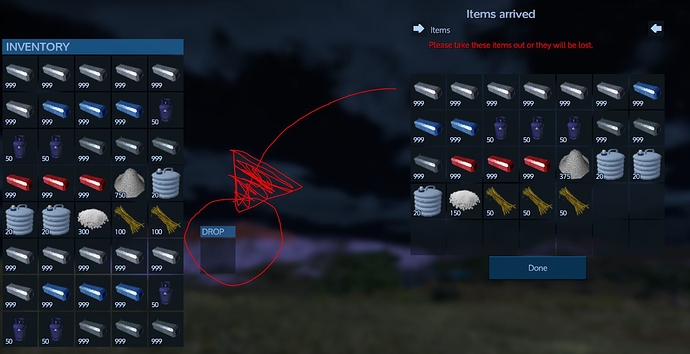 There is always a drop field in the exchange window and if it isn’t ocd:put you get always three warnings before it is really lost.

While it wasn’t meant to be harsh or anything it is just the daily habbit of how people might lose their stuff and our reaction to common things.
Especially after such a hard and exhausting weekend we feel burned out now and issues like this are, well, player caused.

And last but not least the final point here is to make it fair for everyone and since we didn’t restore things in such cases for anyone it wouldn’t be fair for all of them, if we do now an exception.

@RexXxuS Thanks for responding and for unlocking the thread; 5000 refined pentaxid isn’t that hard to replace, but I wanted to be able to discuss the OCD feature itself… there’s room for improvement here. A few points and questions:

If this is something that’s caused by Eleon, I’ll try to take it up with them as a feature request. I was testing on their experimental server when ours was down… they have a do:re function that drops a full loot box full of 10K stacks (yes, 10K). The stack limits revert to 999 when it hits your inventory, so even an empty inventory won’t have space for their drop. When I tried this, I was standing in front of a survival constructor… by the time I finished using the drop field, it was surrounded by nearly 100 drop containers. And they time out in 60 seconds, so it’s basically impossible to get the items from their care package.

TL;DR here… losing some pentaxid is annoying (and I’d still like it back), but the buggy behavior of the loot box is what really annoys me. If you make an error and pull down more than you can carry, there should be some path to recovery. It could be a short delay (30-60s), it could be a more durable drop container (say 5min), or it could be a “refuse shipment” button that reverts the call. Huge bonus points if we could do a swap in that window (items come down, whatever’s left in the container goes up).

I play on the HWS server and came across some annoying behavior with orbital drop boxes; after thinking about it a bit, this may be a core game change...

thanks for coming back to me and for your suggestion (even though the OCD is an exclusive HWS feature I’m holding the Intellectual Property rights for it).
But you are right, the general so called “exchange window” is coming from the Eleon API and only allows us to open these little 35 slot window with what you can see we are able to do.

I’ve talked with Jascha about it and some things for your notice:

We will bring that topic up to Eleon, maybe we can boost the API regarding this.
Thanks again