Make aliencore great again for RE

In this case nobody asks to go beyond something we already have available in the current HWS RE scenario though, which is +1m cpu from a core. Because we already have that from an advanced core.

Also Rex specifically asked us for our input here!

yes and this is my input also.

the advanced core is limited to 1 per player every season. the suggestion of adding multiple 1mil CPU cores completely circumvents the changes in CPU.

as i have been saying, the problem u guys have is with the CPU calculations. throwing more CPU points into the equation will not “solve” the issue, only compound it for later. the CPU statistics themselves need to be adjusted in the scenario. this is why I keep suggesting to contact the developers so they know that their metrics suck at the moment.

what needs to happen is weapon damage/thruster power increase and lowering of mass. this will help the strain of CPU points as well as improve stability. but again this is not the place for that discussion as the people who are able to make this massive change do not visit here. advocate for change in the scenario itself and let Rex modify his own universe that he has been trying to do for over a year but keeps getting delayed to modify someone else’s creation.

I mean, you got what you paid for and now just wish it was better. Just because recent changes have made CPU the main driving force of progression now doesnt mean other convenience items are useless. Scenario changes will constantly shift how valuable items are, and it is unrealistic to expect Rexxus to tailor the core for each update. The core still serves the exact same function as when you got it. The only thing that changed is when you may want to use it.

Do you have problems understanding English? I quite clearly state you don’t have to change it for current owners and make a brand new one to sell to support the server.

Please read comments before replying, it’s irritating when people chirp in without reading.

And yes it’s utterly useless. The main purpose was to run big heavy battleships with tonnes of thrusters who’d be constantly moving in 15-60 minute fights depending on content, however now the CPU Limit is 7m with an Alien Core, the Advanced core adds another 1m making 8m total possible… Considering how TIGHT the budget is for ships you’d have to be literally mad not to use Adv on a battleship.

We are talking about a clear 15% CPU increase by using an Advanced Core vs Alien.

Ignorance is bliss, see it how you want, but the benefits of buying an Alien core for your battleship is entirely GONE.

Then a change in CPU is required, because a Viable Ship with 10 AUX and 10 Quants is no longer viable.

The weight, power and size of these shield caps, imo is an idiotic implementation - in the stats department. For example too 1x T3 shield cap is 6x heavier than 1 T2.

NPC weapons don’t appear to have scaled at all with the stock smaller shield size, meaning you literally have to use them or get 1 shot.

Shields quite frankly are pretty useless now…People riding around in pure carbon ships are living a very risky life now (compared to pre 1.7)and there’s even more reason to carbon up this season.

I have a decent understanding of English. Thank your for your concern though. My reply was related to your comments about the current Alien Core, not your suggestion for an entirely new version. We all have differences in our Empyrion experiences, and may view things differently. For example, I love the shield changes. But, I dont believe this is the place to air our grievances or praises for the scenario update. As for the Alien Core, it still performs the exact same function it always did. Players may value it differently now, but, I wouldnt say it is useless at all. Personally, I dont believe it is a good idea for HWS to start selling items that can be seen as pay to win. I feel that the supporter purchases are largely convenience items, and dont give a competitive edge for the most part. I would hate to see the day that builds are not viable on the server unless you purchase item x from the shop.

this is exactly why I say your CPU concerns need to be voiced with the creators of the scenario. if Rex decided to start modding this scenario, it would take his full attention away from his own universe. the alien cores have always had the same value as they have for years. they are meant to stop fuel and oxygen consumption, not to negate CPU mechanics. you really need to contact the developers of reforged Eden about your CPU concerns otherwise nothing will get changed

It is viable either way, but at least you’re still getting the paid benefits, this is what you’re struggling to understand.

it seems u are struggling to understand the benefits. the alien core has never had any other benefit outside infinite fuel and oxygen. this has absolutely nothing to do with CPU. it never has.

the scenario has been modified to actually enable the originally intended limits that were not noticed until recently. not sure how else to tell u that this is not the place to get core configuration changes made for the reforged Eden scenario itself.

the alien core is far from worthless. if it’s that useless to you I’m sure there are others that would gladly take them off your hands.

It seems you’re struggling to understand there is no benefits when an Advanced Core offers 15% more CPU in a CPU Capped environment.

15% more damage or shield or thrust is worth much more than some free power. Sorry but it’s true.

The point of this topic is to make it more relevant, not to discuss how “it’s always been” because 1.7 brings an entirely new issue with CPU Limitations.

Let me reiterate, no battleship is taking an Alien Core over an Advanced Core. If there was no Quantum cap you’d be right.

The point is the sales of Alien core will be incredibly small - If there was a new core with 1m CPU it would sell like hot cakes.

Maybe just make the Alien core into an Alien fuel system…since that’s really what it does (i.e. remove it as a core and make it into a placeable fuel system. Then it would work with the advanced core? Just my 2 cents.

so, you basically want a pay-to-win in form of this yours “extra-special” core?

Wow, wtf is wrong with people not reading?

I’ve even said just stick advanced cores in the shop.

this wasn’t designed to insult each other. this is for discussion. it seems you I have little understanding of how this universe works. we have been reading what you’re saying. you’re not reading what anyone else is saying so this is where I stop trying to talk to a brick wall. good luck.

I responded exactly the way you did. If you find that insulting I would recommend against leading with that in future Bob.

I am reading everything you say, but you are not reading, digesting or comprehending the fact that things are different now, that is the point. You’ve gone from no CPU limit to a crushing cap + new tech which uses even more CPU, whilst retaining “HARD” Difficulty. Alien ships with their alien shield gens now have the new shield tech making them even tankier.

My point and the fact remains in a CPU bound situation, 15% more CPU (1M) is worth more than free fuel and oxygen. If i was wanting to support the server by buying a core, I would look at the advanced core (if it was availabe) over the alien every time, and ANYONE in a warship would agree.

Whilst you might also then say “well it’s good for base”, well any space base can operate entirely from pure Solar, so it’s irrelevant there - and if you’re going for HIGH CPU use + high power use, using a “Solar Smelter” Module will entirely fix your cpu or fuel issues.

I totally understand your comments, but you are not understand the fact that as a paid “revenue generator” it will no longer generate as much revenue (if any), therefore pretty useless.

Now if he sold Advanced Cores or a new Alien Core modded with CPU, then that would generate plenty of new revenue.

Also, it’s worth adding on a seperate note that it’s only 1 Advanced Core per Player per Season. Which means if your Battleship is Wiped out due to desync/dc/ or just user fail you are then gimped by 15% CPU.

If you want to discuss the CPU Limits or not the issue with the Alien vs Advanced is directly related to the very shocking CPU Limits, which I’ve said many a time is made far worse with the new shield tech.

I have before previously suggested putting in Size Limits or Quantum limits and reducing the difficulty, or just capping Quantums, which I’m pleased (in a fashion) that it’s been done. However the changes make any 1.6 Ship BP that was say 2.1m unusable. So I hope from that point of view you are understanding as a money generating item the Alien Core is pretty much useless vs a core with 15% more.

This also (which seems to be raised alot) absolutely NOTHING TO DO WITH EMPYRION DEVS, they already dislike RE so going crying to them will do absolutely nothing for you. This if anything should be discussed on the RE Development forum.

On a slightly different note Bob, Your main war ship then, what core are you using on it?

now you have pay-to-lose-CPU, enjoi it
you can put an advanced core and be happy or you can buy a alien core and get -15% cpu for you ship, profit!

PS: Bob never played RE seriously, but constantly trying to teach everyone “how it should be”. Without knowing the mechanics of the endgame, this is… strange

it’s about reading the room and understanding the universe ur in. the main thing you are not understanding is this is not a department store. there are no purchases of goods or services. this is all donation based support. the goal is not to generate revenue. this is a private server where everyone contributes what they can to keep the server alive. some contribute money, some time, some knowledge. this is not a pay to win game here. wallet warriors do not bode well.

on the “changes” that have happened, u are still refusing to understand that the server owner here has stated several times that he does not want to modify the configurations to the scenario so any feedback on what has “changed” needs to go to the developers of the scenario.

nobody told u to contact eleon, the developers of empyrion. the ones u need to contact are the creators of the reforged eden scenario. that is vermillion and ravien. they usually hang out on the official eleon forums and discord. if u had actually read things as u say, u would have seen this is what i had suggested.

hopefully u have actually read this post and now understand what type of environment ur in. then please continue to enjoy what has lasted over 6 yrs. 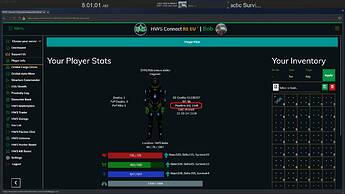 we are waiting info about your battleship in 1.7 RE

Finally me and Holo agree on something, only took Bob’s rudeness to come to fruition haha!