What happened?
=> I placed a Polaris Module D on Zion and the planet seemed to crashed right when i placed it. When it came back, the base wasn’t placed and the resources were gone. This happened around 5:15PM CST I believe, but it should be right as Zion reported a crash, hopefully that will make it easy to find in the logs.

On which Playfield?
=> Zion

Structure ID(s) (Open ingame console and type di)?
=> 104698, it shows up in my structure commander but I can’t call it or anything

How can we help you now?
=> I guess refund the resources or if you can, set it as a completed BP? Either works, whichever is easier

To update, and avoid confusion, I have placed another, but the original issue is still there. I guess I don’t need the completed BP though so just the resource refund. Thank you!

sadly we have no good backup of it. It appears without blocks but still “alive”. its a new game bug we have to figure out.
The new structure is still ok?

The new structure is there, but I lost the materials for the one i made, which was the same BP. I’m just hoping to get a refund for the materials needed to create the initial structure that was created.

Sadly we can’t do that. Its a new game bug and it might happen more often.

But you are the first to report, so this will be an exception.Please paste a screenshot of the blueprint and its cost and make space in your ocd.

Do you noticed anything else?
Also when did it disappear? Did you see it ingame and then it was gone, or did it not spawn at all? If so, how long was it visible.

So when the clearance box for placing a blueprint had just turned green, I placed it and just as soon as I clicked, the planet crashed. Unfortunately, that’s about all I can offer for what happened. I don’t know that it actually spawned, as I never actually saw it on the ground, but it did take the click because the planet didn’t crash until right after I clicked to place. 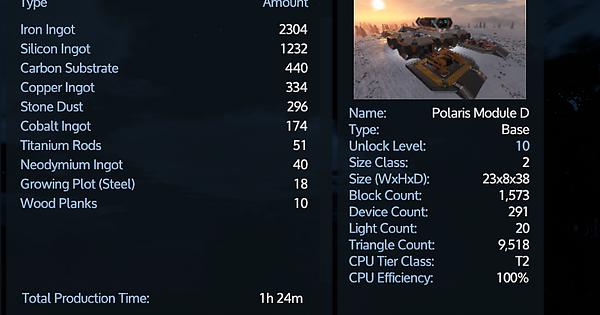 Ok, thanks. We will check if we can see something.
I restored the most important stuff in your OCD.