What happened:
=> Spawned in a HV that i put in my CV. Warped arround, and desided to test the HV. To take it from space to planet, i was going to use my sv. So, i moved the HV out of the CV, and flew after with the SV. When i was to dock the HV to the SV it did not work! I then realized i could not press the P button on the HV, so i tried a restart!
Comming back, my HV and SV was melted togheter as one! So i tried to admin warp the HV away. That worked, but half the HV was still inside my SV. This has happen before!
So i put the SV to stealth and back. But this time it was still the same! so i adm warp after the HV to try the same! BUT, there i had suddently ANOTHER SV, copi of my own! And the HV was red, as the core is kinda glued to both my svs! So now i have a HV i can not use, and two svs i can not use (and really just need the one)

How can we help you now:
=> Remove one of the SV`s and destroy the other one! I taken out the stuff, so dont need whats in it back! If it follows i just scrap it anyway!
If possible, the HV back as well =)

Does cb:destroy not work on them?

nothing worked :-/ And being adm ships, i didnt want to mess to much arround with them!

=> Remove one of the SV`s and destroy the other one! I taken out the stuff, so dont need whats in it back! If it follows i just scrap it anyway!
If possible, the HV back as well =)

So what do you want us to do? What do you mean with remove vs destroy?

My sv’s are mixed in with the hv.

Another problem, that i belive has to do with this problem over!

I have paid tax on NA, for all the ships i had problems with on EU!
Got a feeling that the csw made this mess from the start maybe?

Only ship i had in NA and in taxzone is the hwp infoship! 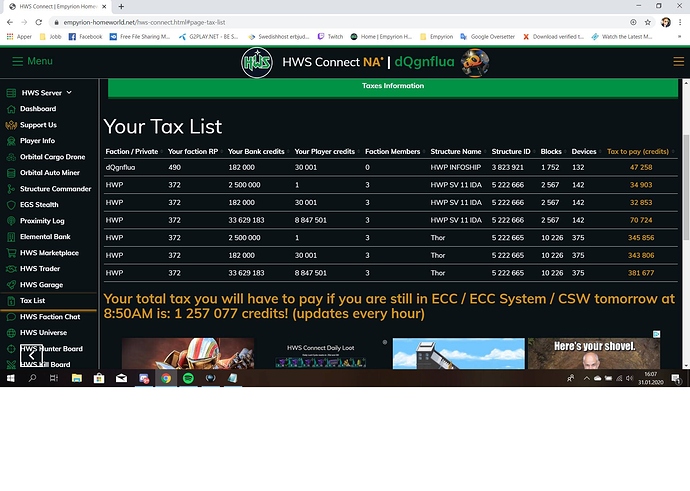 can you fix this also @Jascha? didnt see it before now :-/

thank you! Asked my team mate also, if he was withdrawn of anny =) Keep this tread open. Will close it when i know from him =)