What happened:
=> Someone from OPG, flew a CV onto our tower on GG, made of blocks, so our base can’t shoot. They also clipped something inside our base i think? I wasn’t there. I’m just making the ticket. 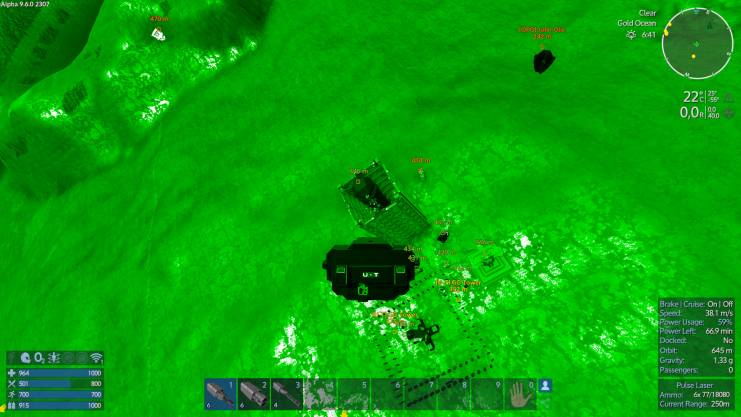 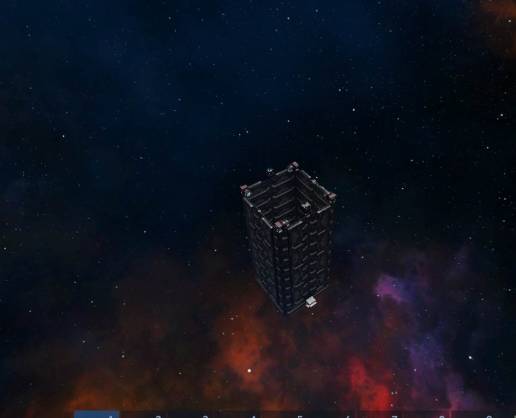 How can we help you now:
=> Please handle this with OPG.

I’m wondering though how he was able to fly with this CV slowly and precisely on top of your tower without getting shot before by your other turrets.
Maybe check your target settings @Dr.Dark ?

However, the end result and before this become a new meta is a game mechanic of the game which is broken. You can interrupt any turret targetting by blocking their path in front with blocks or other non-targetable items.

Again, before this makes a big round and become a meta where only such dummy-blocker blueprints are created I make clear that this is considered as exploit because there is absolutely nothing a (passive) defender can do about this.
The turrets are already bugged enough. No need to push this “PvE in PvP” tactic.

=ice= get as a first and little warning guilty.
Don’t do this again.

Just be be sure you noticed, he placed a CV INSIDE our tower. Not just landing it on top of it. Check video: 3:49 @RexXxuS

Nope, that is not how Empyrion works.

Empyrion grabs the bounding box of a structure, calculates the whole thing and put the HUD Marker (in this case “Get rekt!” in the center of the bounding box (or slightly above). Sometimes however it can also depend on the Core position or Cockpit position or if the structure is overall decored or not.

So if you flip that image here horizontally you get what you saw in 3:49

So… as always I’ve been already punished without proper investigation, its very nice. So why am I guilty? What I’ve done?

U-T guys, just a little remark for you. Try to contact Fallen Angel and speak with him first. Just because he the only one from you faction who can understand what PvP guys like OPG and RED doing. Report later, you can always do it.

OK, i see here people, who have no idea how Empyrion and automatic turrets works, like completely. Should i really make a video with explanation here?.. Because i don’t wanna reveal our combat tactics for free.
But you can try yourself. Just turn power off on your CV, fall near hostile BA/POI and look what happens. Its very easy.

Rex, please don’t make new rules until you figure out the situation properly. Its not wise at all.

But you can try yourself. Just turn power off on your CV, fall near hostile BA/POI and look what happens. Its very easy.

I know this @IceDrugg
I have this even on my video how you did this during the HV Deathmatch event.
It’s smart and sneaky.
It isn’t the problem though.

Rex, please don’t make new rules until you figure out the situation properly. Its not wise at all.

as always I’ve been already punished without proper investigation, its very nice. So why am I guilty? What I’ve done?

The problem is, as so often discussed in Discord PM with you, until you threaten and insulted me: you think that exploits and bad game mechanics are part of the game and Developer are shit.

1.1 Under no circumstances will the use of any bugs or exploits for personal gain or profit, or any advantage be tolerated for any reason.

And to repeat:
If you imprison towers with such ship / Caves, then the turret don’t have “vision” to a target anymore. You basically deactivated the whole tower.

That means your whole faction can come and the tower does not shoot at your SVs because the tower/turrets have no vision to the targets.

The game problem: turrets either should have a “X-Ray” feature to look through untargetable blocks / Hangar Doors and shoot their way through or they just shoot at everything which is not in their own faction / private.

Until this is not “fixed”, this game mechanic is an exploit.
Your Cave was funny and nobody got hurt.
But you probably wanted to test me and how I will react.
And if I say “it’s ok”, then the next step would be to have a complete new PvP meta, where one faction is blocking the turrets of the other factions.
It’s no gameplay anymore. It is “who can exploit faster and better than others”.

TL;DR:
Concentrate on the real PvP mechanics without cheap tricks.

So let me get this straight… We can’t n are not allowed to block turrets in any form or way?? Rip

We can’t n are not allowed to block turrets in any form or way?? Rip

… as always… just use common sense?!?
Do I really have to teach everything?

What you did last season on Titan… building a kind of “wall / barrier” to protect your assault assets near the enemy base is fine!

But flying with ship condoms around to put on towers is stupid and will be punished.
Now rip?

Ship condoms, best analogy yet of the season!

So I understand the how, and also the why, but I am curious, was this the developer intent to nullify turrets targeting devices buried in blocks? I don’t follow the logic of “if it’s off stop shooting at it”, I would rather like to have that option for myself. It my be for saving ammo and performance reasons to shoot enemy vessels that are off, or exploited as well…

I am curious, was this the developer intent to nullify turrets targeting devices buried in blocks?

I don’t think so… just a rushed implementation again

I got 2 questions.
Why server keep putting me into “Pirate” playfield with no chance to leave it? Even Syras can’t help me.
Can we use “shield wall” CV to protect own SVs and HWs? Or maybe its cheating too?

Only reason for “rip” was to the idea of doing similar on NA GG while running solo against numbers. Just clarifying… The other route is pointless when out numbered so back to the drawing board on a tactic to push bigger factions away from towers. Wasn’t arguing.

The other route is pointless when out numbered

Biggest? Well sounds like I’ll be joining forces with others then. Good luck out there

are you guilty and going to pve maybe?

The problem here is that a big cv can be dropped on a base complex, because gg has class 1 cv restrictions. If there was a 150 blocks cv limit as before, it wouldn’t be a problem, because the strategy can then be countered by active base defending and manually shooting cv with base guns/sv guns. Base attacking in it’s current state doesn’t offer alternatives other than abusing turret fire priorities, different tactics other than digging are not worth it in terms of resources, so fixing this unintended mechanics will do more bad than good to pvp in general.
The case in this ticket is in no way game breaking and defenders could’ve countered it with ease.

We did counter it, and doing this is just gonna kill PvP. There’s no reason to build a tower if it’s turned off, just by turning off power in a ship.

But i do agree with 150 block limit though. Maybe a bit higher, but size class 1 is too high.

You can have 3 bases on gg and only 1 cv for a whole alliance. There is no way to block every single one of them, especially if they don’t have all the weapons on the main building.

Politary, my condom CV was made last season and it was 148 block. We were just too lazy to use it last season.
And its a shame to make reports like this for real pvp guys. Unless they are deeply pve guys. There is no problem to shot all that hangar doors. But it seems it is too difficult task for some players.
Next time we will drop Tier 1 CV next to their tower, they will report it and we got banned…

That’s why I suggested a 150 block limit. 150 block cv is easy to counter by active defending, but that wouldn’t be so simple with 20000 blocks class 1 dome…