What happened: 4 of my foundry ships were destroyed and or stolen, and a proto Q was shot up in PVE
Player(s) with issue: Serious Squirrel
Server: NA
Time (cb:time): Within the last 12 hours before this post
Playfield: ECC
Structure Name(s): ACP - Gold Coins, ACP - Gold Teeth, ACP - More Gold, ACP -
Gold Bars, ACP - Spare Proto Q
Structure ID(s): 4806201, 4806204(2 of the lost foundry ships, the other 2 must have been stolen as they no longer appear in registry even as deleted) 7664775 is the proto Q which is all shot up
How can we help you now: Either an admin messed up or we had a hacker or exploiter who figured out how to damage ships in pve I would like the ships returned to their previous state and guilty people punished if it can be determined who did it

No one exploited anything, A drone blew up your ships and I harvested it. I tried to be the nice guy and reach out to Rexxus and explain everything and he called me a blatant liar, saying I exploited something. I looted two blown up ships after killing a random drone that was flying around. You want your stuff back come to Alliance HQ i’ll give it all back. I don’t want to play a game where an admin calls me a liar and acts like I did something I didn’t even do.

You lost those ships to straight up PVE I just so happen to be in the right place at the right time.

He said I exploited the drone mission, I haven’t even completed the first few quest in the game and have no clue what that even is. Anyway, like I said. I don’t want to play this server if I’m going to be called a liar twice. He called me a liar when I asked for a corpse back a few days ago for no reason at all.

Conspiracy… admins are really bissy at the moment and stressed out to the hilt as they have so many problems going on if you have any issues please just make a ticket no more no less info makes life simpler and no one points fingers rexxx im sure will look at the server logs before he sorts out this ticket.
so just be patient and wait in the mean time it woudl be good if you gave the guy back his things.

It took me one hour to reproduce the whole situation and it was no hacker but kind of an exploiter.
2 guys.

I always feared it would happen if people find out about it but was maybe naive.

Now IF @Conspiracy gives you your stuff back then there is a 1% chance that one of the guys MISSCLICKED a quite obvious action and acted in such a way that it RANDOMLY destroyed your ships… then I am fine with it.
But let me explain what happened.

For Alliance I created a mission which spawns a Drone and their task is to destroy that drone. That should train Alliance some shooting. Cool.
The problem with that chapter / mission is, that you can repeat it every time you deactivate and activate the mission. So toggle the chapter couple of times and you can have 50 drones… on PVE… destroying everyone everywhere.
A warning alarm got me yesterday already as I saw this:

A 2mb playfield log file?
Yes, because it is flooded with a warn message, resulting from that drone chapter. 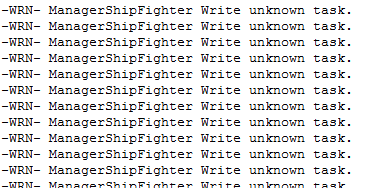 I found out later and during the night I already wanted to remove that mission today. But I guess I was too late.

Because this drama here happened already:

so 7:33 AM the ADK PDA chapter got activated. And what is that chapter?
The drone mission 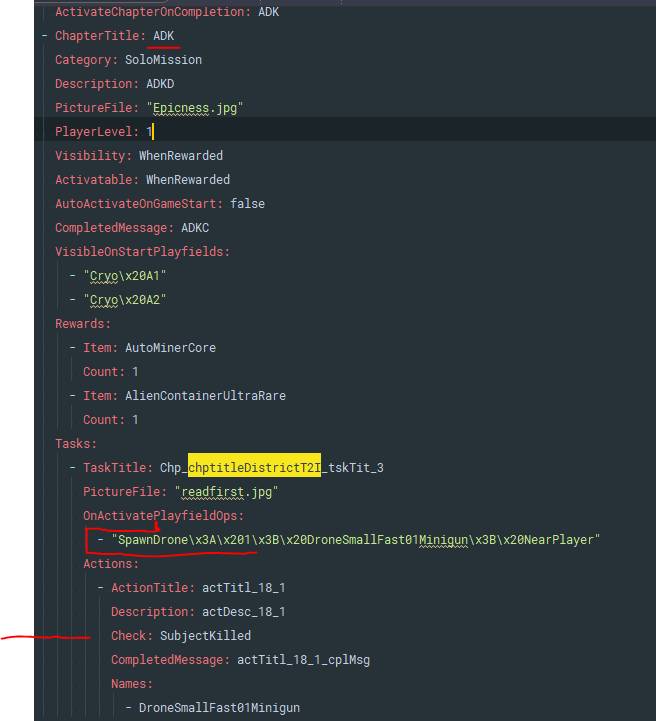 Little background knowledge here is at the very top line: the ADK mission only get activated IF the previous Alliance mission got completed.
And that first mission can only get completed at the Alliance Starter planet.

So the only people who were at THAT time at THAT position were only two Alliance guys.

And I’m naming here player because I get myself called as liar??
It was not easy to find out everything and I really care about truth so be careful.

Of course their backpacks were after some minutes full of ingots of everything.

TL;DR: there is a 1% chance of coincidence and accident what happened here and any punishment would be reverted if the guys giving ACP their stuff back. I’ll wait a bit if this is happening.

But 99% were looking from a general sight exploiting and even if it was maybe my mistake to try to implement a cool (but buggy mission) it still falls under our rule:

Definition: A Bug or Exploit, for the purposes of HWS Law, is defined as “Any mechanic, whether executed in or out of game, which creates a condition that was not an intended functionality of the game OR HWS Server features.”

Hope it is clear now.
The mission got obviously removed on both servers.

Part of the issue here Rex is I lost 4x alien core foundry ships and no way to know how much gold (I dumped a large cargo crate of gold ingots, and atleast 4 large cargo crates of gold ore into those ships last night to process along with many other resources stored in them from my OAM over the last few weeks. (by foundry I mean the agarage ships the foundry)

We should have moar drones doing drive bys from now on. That’ll keep them from littering!

These would be restored of course

I didn’t exploit what he is saying Serious_Squirrel, if that happen It was by complete accident. I told him the 100% truth. I looted two processing ships only.

It also strange because right nexto them was a fully armed mjolnir and the drones killed all 4 foun dry ships but did not attack the cv, the mjolnor or the two x7

Come get your stuff I will not be playing this server.

Those the ones you kept on your little island?

The Mjonir was powered on

is it possible to revert those ships to how they were last night? then their contents would be returned to me as such, and deleted from the persons inventory?

I restored the ships. Rest needs to be resolved with @Conspiracy, since it was an accident as he said.

I will not be playing this server.

That is your decision. But if a player calls for a hack or exploiter I investigate properly. If you like to play on a server where this won’t be handled properly, go ahead.

Again, no hard feelings, except you calling me liar. But I see facts here and told you about it.
If it was an accident at the end then all is cool and you can agree something between you and him.

My job is done here.