Spawn in Medbay Bug 52km Out in Space?

I believe I have been bitten by the “spawn in med bay” bug on NA, exploited by 2 members of a faction showing in my intruder log. I was offline in my CV >52k from planet Lua. Went offline sometime early evening US Eastern time. Logged on 3 April ~4:15 pm US Eastern time to find myself floating in space. Only a gutted SV (Pug) and HV (Bug 1) remained (still had cores) where they were once docked to CV I was in. CV "Charriot III - id #36956092 set to LWN faction as were the SV and HV. The intruder logs are what make me think it was the medbay bug. I had a medic station on the CV & only way I could have been set private or public is if system did it to me or I was cored and my ship stolen using the bug. Following are screenshot of remains of my SV 52k out from Lua and my structure log. Missing from the structure log is my CV I was in when I logged off last night. Since I posted position, I spawned a sled and jumped out, but SV still sitting there cored by me and I already cored and destroyed the bug. I have my intruder log showing faction and two players who I think spawned into my ship and stole it. Not posting here per your Discord suggestion. 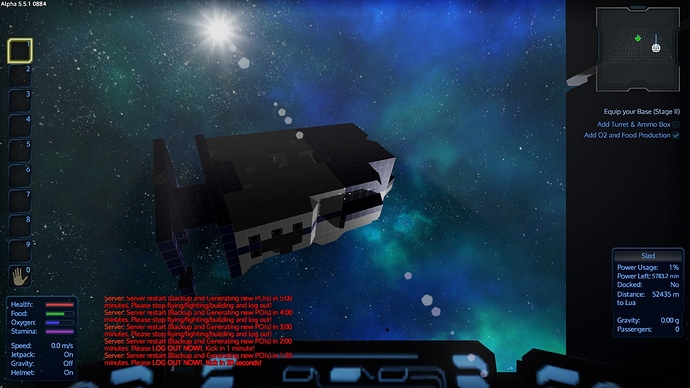 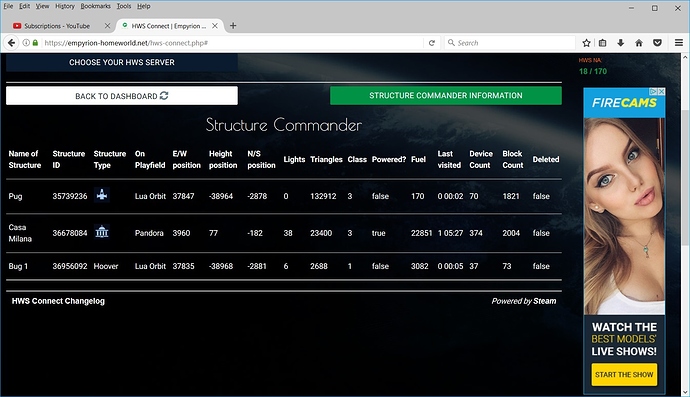 Logan and Bangles from NFA.
Bangles had the Bug, @Logan came to help later.

For both of you: Please respond to this post.

As our rules say and as we mentioned multiple times in connection with this bug:
You should not exploit the situation or tell anyone the location. Instead out of fair play and contribution to the community its expected from you to let that faction know that you discovered their ships. You should leave by any means. If it causes you the loss of your backpack make a screenshot and pm us.

Disclaimer: you are playing an alpha game. This game will change rapidly and sometimes with little to no notice. That is your agreement with the developers of this Early Access game: to play with and help test the functionality as the game develops. As a result, you may find bugs and even exploits. Definition: A Bug or Exploit, for the purposes of HWS Law, is defined as “Any mechanic, whether executed in or out of game, which creates a condition that was not an intended functionality of th…

I was transporting goods and was warping across several systems. I got disconnected at the start of one of the warps. My body was left in system A and the ship went to system B. When I logged back in I was about 300 meters from the complainant’s ship which didn’t shoot me, that’s cool I think they had turrets off. The second I took a step to back away the ship opened up on me and lit me up. I never spawned/warped inside the ship. I’m still not even sure what happened. I was angry I died and wanted my items back and from what I recall my only spawn options were spawn in area or fresh start, since I didn’t have a home set and my ship was in another system. I didn’t even pay attention to how far away it was from anything and had just assumed I was at the location you get dumped at when you finish warping. I didn’t know I was in violation of any rules I had just assumed the same bug happened to this person that happened to me. Incidentally the ship immediately despawned after being disabled.

I’m happy to pay for your lost ship(s) to right the wrong, and will do so several times over. Nobody likes being the victim of a bug and in a way we both ended up with the short end of this bug. I didn’t know that leaving and having items restored was an option. Hopefully the server logs on a diagnostic level and will corroborate this. The frequency I’ve seen people experience the warping bug I thought it was just something you put up with.

From what I was told the respawn bug only happens if power is off on the ship and that ship was very much active as my death log will verify.

Edited for direct objects and clarity.

No need to repay. I am just hoping the devs find the bug someday. Thanks for the response!

If it ever happens again, just reach out to admins via Forum. They’re usually very helpful when you get separated from your ship due to a warp bug.

Thanks a lot for your responce!
All good