Is it possible to add a feature wherein, instead of resetting POI’s by modifying the area file, just do a series of "regenerate " commands to the server?

Because right now no matter what I do, even if the playfield is unloaded, the POI’s still won’t reset for some reason. Just the deposits and terrain works.

Thanks. That might be a solution, even though it only works if the POI is not destroyed.
Have to ask Devs to get that command over Mod/Telnet first though.

Yeah I get what you mean.

Also a posibly, a “Shared” folder cleanup wherein you delete all folders without the player name on them?

Also a posibly, a “Shared” folder cleanup wherein you delete all folders without the player name on them?

Can you explain that a bit more?

Right now, a manual method I’m using to reset POI’s is just deleting the contents of the Shared folder in saves, except the ones that have the “Player” in the name of the folder.

After the restart every POI is reset.

hm but that should be done also with our old POI cleanup funciton.

Oh where do I access this old POI cleanup function? 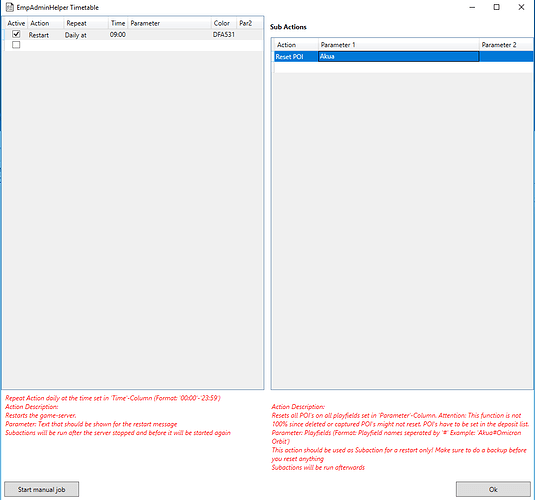 Use a restart and then a Reset POI in the Sub-Action
You might want to do a Test run and make a backup before.

I see, thank you! Will try that out

Is there a way to reset ALL POI’s in one go?

Ye put it down as akua#omicron#masperon etc etc