Vessel unable to move and was destroyed

What happened?
=> ship stuck and destroyed

40hrs in, 1st CV, first run into space, all worldly goods on said CV. 4 turrets, steel, shields… On way to Homeworld, 3 stops to go and need some Pentaxid. Stop off at an asteroid, get in my armed mining SV but get attacked by 2 zirax fighters, which is cool. Dog fight the fighters, kill 2, limp back to ship. Whilst limping back, a CV appears and blasts my SV to bits, groovy !. Repawn in my CV as you would, as press W to make a quick get away, shields at full. Only it won’t move will it, it’s the a 'ship is not docked cannot move " senario Go outside with multitool and dismantle the remains of the already cored SV. My CV still wont move. Ship is blown to bits by the CV and i lose everything.

On which Playfield?
=> RE, Dambene moon sector, Gugo System

How can we help you now?
=> restore ship and goods contained.

i guess not. Rex, can u refund my HWS Supporter package, i’m not starting again after 40hrs of work.

My CV still wont move. Ship is blown to bits by the CV and i lose everything.

Good Morning,
sounds strange. Not heard of it before.
It sounds like you got ambushed by the stronger Reforged Eden Drones / Patrol Vessels, that is intentional added to the Scenario. And since the SV got destroyed it was considered as not docked (?).
Overall part of gameplay, which many players are dealing with.

If you lost everything by that, I can do a one-time exception and restore it.

can u refund my HWS Supporter package

This is btw. not possible either way. You already activated / used / unsealed the Package, hence not refundable anymore.

Thanks Rex. Yes, i lost all, please restore ship and goods inside. SV was say 3 large blocks away from CV when the SV was destroyed. As we kow one tiny pice of a block can totally immobilize a ship…that’s what happened.

Ok done.
From the last backup we had available 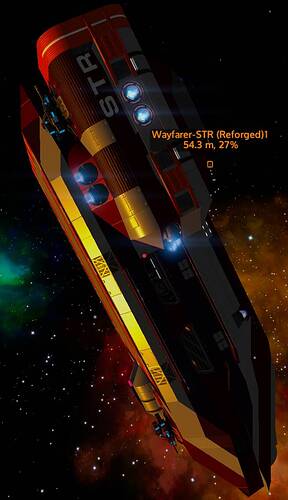