What happened?
=> Today I did the Alien Derelict Mission and found that it had been nerfed so badly that it is no longer worth doing. It is rated Medium, which I always considered was wrong - I consider it Hard, but it always had a reasonable reward at the end. Now it is still rated Medium but the reward is worse than the Black Manor which is rated Easy. This was the only Mission we had found where you had a reasonable chance of getting Strangelets, a few elements and heavy epic weapons, which are very difficult to find. Now there is no chance from this mission. I died twice in it today for no appreciable reward - the guy at the end was supposed to give me something, but didn’t that I am aware of.

On which Playfield?
=> ECC

How can we help you now?
=> Please could you revert the mission back to its former status as a decent mission, because it is no longer worth the effort of doing now.

fun mission yes. rewards not scaled correctly for difficulty and amount of players that can join the instance.

let me start with my quote about the change:

• Reworked almost all HWS Stargate Missions in terms of our new Reward Token logic. It’s now about balancing the end loot, which is way easier than before.

The last part is the important one.
We will change the reward to Ultra Hard with the next server restart.

For understanding why we don’t revert it: some missions have the setting to Drop the inventory if you are not able to complete the mission in time.
Why?
Because previously missions had Alien Container and other good loot randomly along the way. Sometimes even at the start of an event. If there wouldn’t be the setting to drop the inventory, players could just grab it, logout, login again and got loot for free.
But since this setting is hated and for new players too hard to understand/read, we came up with this system, which other big games are doing as well (MMOs like Lost Ark for example).

The system is:
Along the way you find containers with medics, food and ammo. Consumables. To help with the mission. Why should you find Gold Ingots at the start of an event, right.
So at the end you either find custom loot containers or a Reward NPC. He is given you either a Token or a loot distribution.

The Token is a preparation for the idea to open up CSW to all 4 servers. On each server I can convert that token in whatever loot makes sense for that servers’ economy.

So it’s all about defining the loot you get at the end, which can be adjusted quite fast but should always feel worth the effort/time you had to complete the Mission, of course.

While I’m at it: the Bifrost is a one-minute Instance inside an instance. Since the Bifrost kicks you out forcefully it means you always get to the location you were before you entered the previous Stargate (like logging out/in).
This allows us in future to place Stargate Missions where ever we want, without the need to specify the EGS HQ as destination target.
The Bifrost will play a role later on - for easter egg hunter.

What all of this means: we rely on feedback what mission needs what loot category . What reward feels too powerful and which feels too nerfed.
Once we balanced this out, HWS Stargate Mission will be a smooth, expectable, enjoyable adventure for players and a greatly easy maintainable system for us. (the old system was not maintainable at all, with custom loot placed manually in containers randomly everywhere)

Hi @RexXxuS. Thank you for your explanation. I have several questions still to ask.

The Reward NPC did not seem to give me any reward when I completed the mission.

But you had the 2 options? Token or Reward?
Had you ever the case that you opened an Alien Container and no loot at all was inside?
This is what could have happened here.
The Container config is behaving sometimes weird. Even though I’ve set a chance of dropping something 100%, the game still has it’s own percentage of loot drop hardcoded.
Because the Reward NPC is technically nothing else than a very advanced Alien Container or sometimes multiple Alien Containers combined: 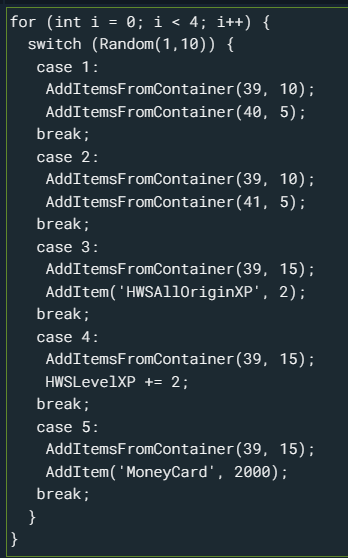 Where can I find a source of strangelets?

In Alien Containers / Reward NPCs / (Dialogue) Quests. At least right now.
The main source of Strangelets will be the last expansion of the universe, in the Chaos System. Beating the Bosses there will give you hundreds of Strangelets - for a reason.

Is the Bifrost active in any way at the moment apart from sending you there at the end of a mission?

You mean if there is already an easter egg implemented? No. There is a ramp door underneath the Strangelet Element but the Lock Code is not yet shared.

Where can I find a source of strangelets?

got tons from the ore lottery ticket trade in guy. spent millions of common ores but well worth the rewards…if u do it right

poke me on discord and ill dump some to u.