Ammo reloading bug on SV it is madness. 4000 rail gu 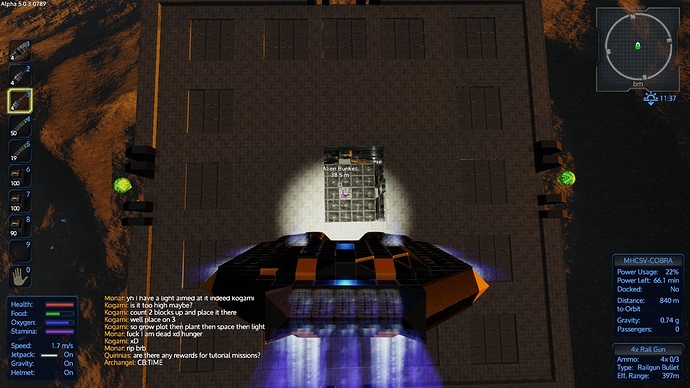 I had this issue. Where you reload. Ammo is used but guns still say 0 ammo.

But I managed to blow up my SV before making a video of it.

Screenshot says instead of me. Guns not reloaded but ammo is goan. And i see strange ammo in the guns panel.

I know I had it too on day #1 in 5.0. Lost sick amounts of ammo. Depleted all of my ammo boxes when I was reloading while flying through green border… Known problem.

But reloading bugs are as old as 2.0. Devs never fixed them (wasn’t high priority I understand), I reported them a looooooong time ago but now in 5.0 they also seem to apply to ships and not just drills. Though the 2 reloading bugs can also be separate bugs.

Any way to clearly reproduce it? Any certain situation that allways happens?

Spawn ship. Load ammo to the ammobox. (Yestersday i had this bug aslo on my CV.) Choose weapons and start shooting. And it is reloading but ammo added not to into my guns it added to quick use panel. And i think this is synzhtonize of guns problem i hear that one or more guns don’t shoot when another is shoot. When reloading bug come. Sorry i have little difficult to expain this on English but i try that:

The truth is somewhere nearby but maybe not. But i think error is somewhere between weapons numbers and its grouping.

Also when you press V during reload to change view mode it bugs and resets the reload. And in 4.x there was a problem where you were able to shoot and only visually (not actually) mine during reload but can’t reproduce it in 5.x so perhaps that was fixed.

I think i find the true problem of this bug! If we have many ammo boxes (6 on Sv for example) and we load not too many ammos (for example - HMissiles) and put it on every ammo box. (50 missiles into every ammobox). When we try to shoot - weapons start reloading but it need 60 missiles and ammo box have only 50 (but ammo boxes is many and every one have 50 missile) here games take mistake and bug come out! Checked 3 times ))) Waste 600 missile

I explain. We have 4 launchers. But when we reload the weapon we have ammo in one ammo box only for 3 launchers. Game reload it but another 15 missile for last launcher it takes from another ammo box but put it into free slot. I shoot - i see three missile go away but in info panel game shows me 0\ ammo in missle launchers and try reload it again and again put ammo to free fast slot but now it cout every missile lauchers as empty and put 60 missile (and stuck it by 50 like in inventory) to fast access panel. Ammo goes to the “air”. Uhha i find roots of this bug !

P.S. And it is continues if we do not have enought ammo for reload all launchers in one ammo box. You can put 50 ammo boxes - put into every of this ammo box only 50 missiles and game eat it at all. )

Thanks. I reported it to the devs