So I was trolling around golden globe looking for fun and entertainment when my logic seemed to fallen off a cliff about the anti-grief distances between bases. I took a pica-ture for your enjoyment, to see the less than distance of the bases on the hill and the proximity to the bases directly below: 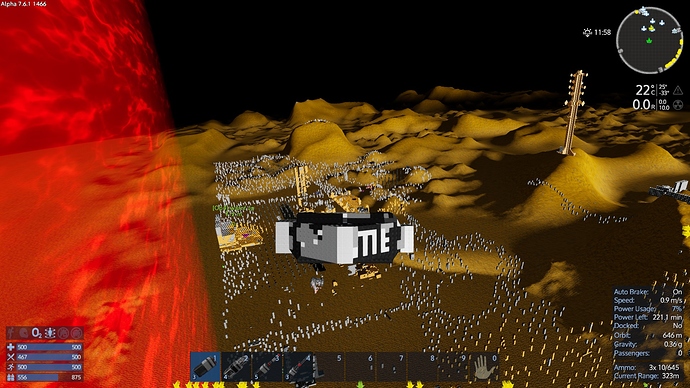 So where did I fail at? Those distances are in no way out of antigrief distance.

@RexXxuS and @Jascha any ideas?

It was spawned outside anti griefing distance. It’s visually hard to tell. Get closer Taco next time…

I actually have a much better picture on the other hill (to the right of this picture) that much clearly defines how close your drop down from the pillars just below. 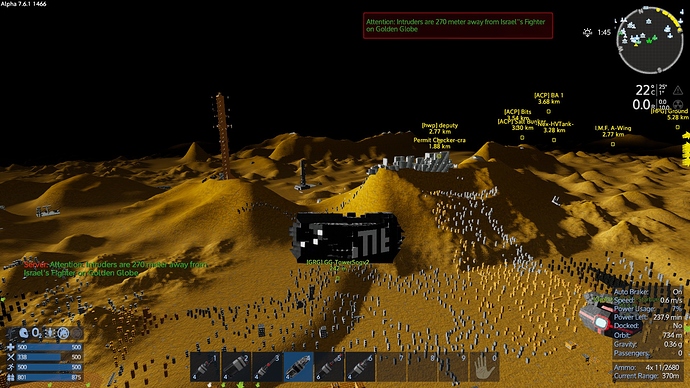 It is well within antigrief distance, and yes I was very close, taking off turrets.

Taco, your understanding of how the AG zone works is flawed. When you place a bp, the AG zone is spawned around the center of the core when it is spawned in, for this server 300m. So any other faction can build a base at 301m away from the core.

Try going on a private dedicated server where you are an admin drop a base, assign it to 1 dummy faction, then take a BA starter block and go right outside the AG zone while not in god mode and it will let you drop the base right outside of 300m for your own faction. Working as intended.

I would actually suggest a 1000m AG zone for HWS 8 assuming the planets are larger if it were up to me, and we could bring OLP back and not have to worry about base sniping or family share OLP towers protecting other allied factions bases either. Would be a really simple and easy solution to implement IMO.

Also we cored that hilltop decoy base so all those sticks up on the top hillside actually belonged to us. Hooray for no more 1 million triangle stick lag!

AG Zone is technical internal limited to 300m. Even if I put 1000m in the config it will be only 300m. Let’s see if the dev can increase this