I know that the discord server allows in game chat for helpers/moderators and seemingly also patrons.

It is obvious that when typing in this chat your messages are appearing under the name server and can be somewhat intrusive to play for other users in game.

Myself as a helper I limit my usage to simple help or support info and do try not to have conversations on it for the above reason.

I want to know how the rules stand here, because patrons can just buy patron and use this channel to type, people in the server are disputing as to whether it is allowed.

Are they allowed to just throw random conversations all day long under the name of server?

Or do they have guidelines that state limit usage to help support or other minor small usages ?

How do we stand because i need to be able to quote the rule on this and personally think there should be guidelines for the usage of this chat facility.

Do not want to see other patrons have an argument when they run into the same setback when the community tells them to stop using the discord chat.

As always I expect common sense in the first place.

If this fails, we have to check from case to case.

In that case it failed and turned into a mess. 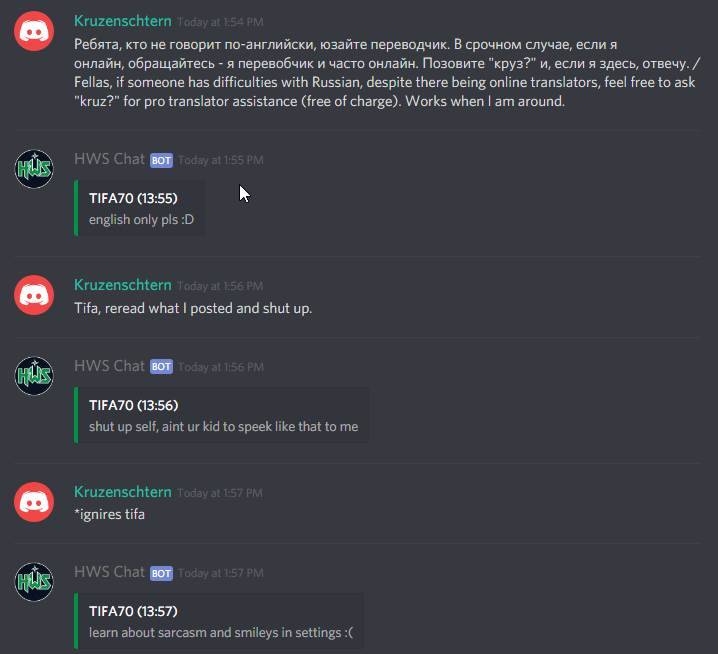 @Kruzenschtern insulted another player instantly with “shut up” even though it was the daily common “russian in global chat” joke.

Some guidelines and info:

Excellent. So I was found guilty? It was a joke?! A "daily common “russian in global chat” joke? Was I supposed to laugh or something? If that was indeed a joke, I can only lament this channels sense of humour. Not even mentioning ppl chatting in Dutch and whatnot and everyone keeping their “jokes” to themselves? Failure to face a problem right here.

P.S. I hope any person in his senses would be able to read what I posted and recognize the idiocy of making this “joke” at my statement and would understand my angry reaction at that.

I think rexxxus was stating that what you said was maybe just an average thing to be said, just that it was said using the discord was abuse of the power you had.

You can tell people to shut up from there but they cannot even mute you because you are on there.
There is no fairness in that toward other players because then you can say and spam all you want and nobody can do anything about it.

Players might then think that another player can just buy patron and then tell everyone to shut up and not be able to mute them because they hide under the server name.
This is NOT what HWS patronage is about.

When you told a guy to shut up, it would not have been so bad if you were in the server as normal player, and the player could mute you and not worry about you.

The reason we have problems here is strictly because you used the discord chat to do it.
And that the guidelines for discord chat usage needed to be made clearer for all, which they now are, in a way you have helped us out.

HWS is a large complex community and needs many guidelines, even more than the ones we have now.
These guidelines are indeed not always clear and HWS always works to improve the clarity and availability of those guidelines when or where necessary.
You can expect more structure with these guidelines over the next 6 months.

Any and all HWS guidelines have 1 or more of those 3 aims so there is absolutely no malicious intent with any pushing of these guidelines where necessary.

You did offer some good support help I saw, some of your help info was pretty well detailed and would serve discord and forums well, but it was too much to type in discord into the server and you gave some detailed help info on subjects nobody asked about.

That was the only real issue I had, I saw no incidents of insult as I did not scroll up that far I guess.

I only spoke up when I was representing HWS community interests and what I know to be common sense expected by rexxxus.

This incident to me is just a misunderstanding over usage of a feature.
I hope you will consider the matter closed with that .

Sorry for any inconvenience and confusion of this feature.

(I have information that we will be getting better chat features from Eleon with soon update patch, perhaps the chat system can be reworked that can help your earlier reported issue about everyone seeing chat)

The problem here is after all, an issue due to the limited functionality of the EGS chat system, and I know that Rex has been in skype conversation with eleon about this feature, within the last 24 hours ^-^

Maybe you have helped make the changes man ! if that is not a contribution, I don’t know what is ^-^

Thank you very much for the explanation, Furious!!
You have laid it out the way I couldn’t.
I hope this particular case just goes to further implementing proper chat in the game and does not linger.

This does leave loose the other case, the “attitude towards Russians”. I consider it another meta problem and hope to deal with it in the future in some way.

Furious, ever thought of pursuing a diplomatic career ; ?

I do hope they sort a nice chat system for us.

As for the case with attitude towards russians, I can promise you as long as I am watching chat I wont allow anyone to insult others or give attitude just because of their home country.
And now the rules have changed at HWS it will be easier to put a stop to that.

Looking forward to the future !
My regards sir and have a nice day !