So, lets discuss some question and situations in Emp and on HWS. Also I wanna know other opinions about it… not from everybody, of course… but whatever, just lets make it public

LC on deposits in PvP
LC or AG (Land Claim or Anti-Griefing, I got 4k+ hours in Emp and still donno which is right) zone for ore deposits on planets and for asteroids in space in PvP.
I mean, why the hell ore got LC in PvP even?.. Any rational explanation? The downsides are obvious. You can do almost nothing inside this zone with you vessel. You can’t put a core, you can’t put any device. So no field repairs just because dumb rock is near somewhere. Well, you can remove blocks, but not put back. As result you can’t recycle vessel inside this zone too (if it is without your core). Also you can’t put BAs cause you’ll see smth like “deposit is near”. LC zone is 300m on server in PvP so you gotta put your stuff pretty far from deposits…
Anyway, its the most annoying thing on HWS, I hate it badly. In my opinion LC deposit zones must be removed from PvP globally and forever. Because they are completely useless and just interfere the gameplay.

Homeworld planet
I wanna say I just don’t like current state of the planet. Why? Look at this:

HW got like ~240 deposits on it. Needless to say its an impact on performance, first of all. When I hit my scanner my FPS drops to ~30. Yeap, my PC is a bit old and slow, but whatever. Also you can’t really see important markers, like enemies, etc. Of course you can use F6 to hide it all but its not solution here really. Also size of deposits are pretty strange - why we even need very small cobalt deposit in PvP?.. My suggestion here is to convert 16-20 random depos to 1-2-3 very large ones. In my opinion it would be better for performance and for mining. What do you think?

Deposits and POI’s LC
Some ore deposits are located under LC zones of POIs, for example this erestrum on Iceworld: 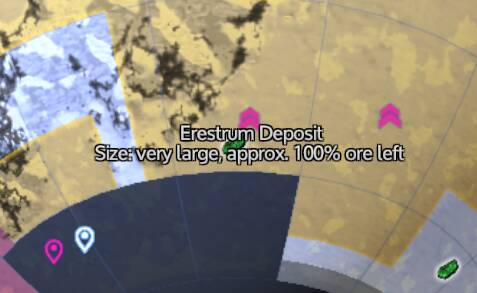 What’s the point of this deposit? It has no sense at all, you can never dig it in these circumstances, its stays completely useless there because no way you can remove LC from admin POI. My suggestion here is to review depos position and move them out of LC zones.

SV vs HV combat
Almost everybody knows SV can’t really compete with HV head to head. If we put 2 player with same skills to these vessels, HV will smash SV with no problem, its 100% guaranteed. And maybe it can smash 2-3 SVs in a row

Yeap, SV got its roles, support and sniping. But because SV is pretty much weak against HV its limited in battle. Well, I’m OK with it but I think one thing is not fair. Let’s look at weapon ranges:

Lasers got highest range and its 250m for GG.

In the same time HV got 313-318m turret’s range.
Difference is about 65 meters, I think its too big and its unfair. HV is more heavy on its own, has better shield (4M against 3M for SV), easier to pilot and higher range… for me its too overpowered, no?

So, my suggestion here is to lower the difference in ranges. For example 270m for SV’s laser and 285m for HV. I understand its important for HV to have a bit more range cause AI turrets need to shot, actually…

But present range diff is too big, in my opinion.

Also I got some sort of experimental suggestion. Since mounted weapons allowed on HVs (laser, plasma, rail) it doesn’t ruin the game and its pretty much OK for everybody. Also miniguns are allowed on SV and it is also fine, But maybe we should try to go further and allow, for example, 2 rocket turrets for SV? Of course set lower range for them or just copy the value from 135H-MSLs (236m for GG now). I think it should diversifies the game and add some new tactics, which can be fun to play. I do not insist, I just suggest. What do you think about it?

Epic heavy armor
To be fair we failed to run Asylum yesterday with Shum in the evening, so my butt is on fire a bit

But I’ve remembered what was so annoying to me. Just imagine, you got fresh, brand new epic armor, 1000HP, clean and shining. You go Asylum and you get your first hit from mad women or from spider and you got a bouquet of all diseases including syphilis and covid… I mean, word “epic” should have a meaning, I guess?.. Why this super-duper armor let me feel like I’m fighting with naked azz there?

Got no suggestion here, just wanna ask, can we lower the chance of getting these diseases while armor got full HP? And make, maybe, linear dependence on health HP?

SV mining
Dark and not studied theme for me… I know there are many-many pro miners here, maybe they can help. So, last season I made special SV with 6 drills to mine smth

Its was pretty much OK, as I remember. But this season something has changed. I tried to dig depos on planet and I got this image: 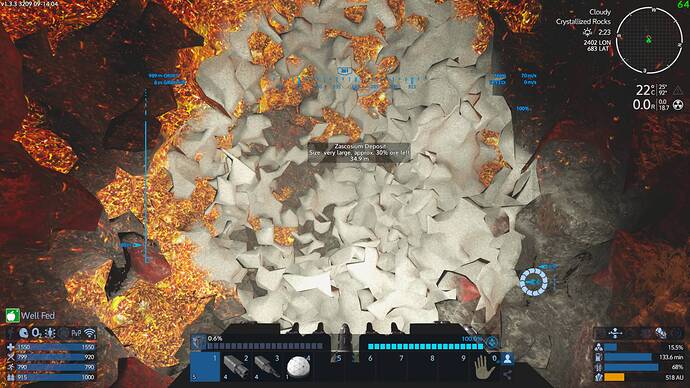 As you see the ore and the ground dug out sloppy, there are kinda thin “worms” all around and it makes digging a bit difficult. But in the same time I got this in space: 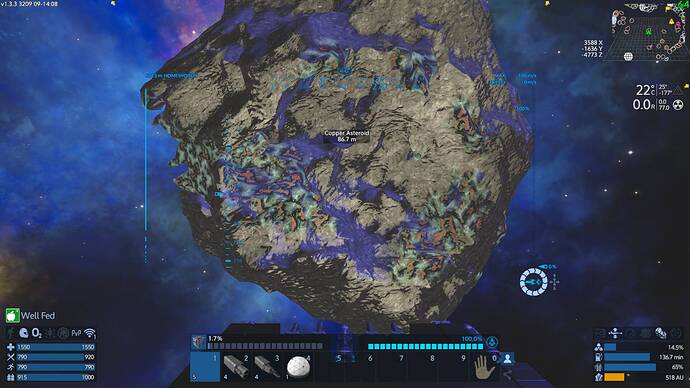 Its pretty much OK in space, got no “worms” and its more comfortable way to dig.
So, I bet something changed in cfg, at least for planetary mining. Maybe roll it back?.. Or how can I evade these thin “worms” while digging on planet?

In my opinion LC deposit zones must be removed from PvP globally and forever.

But then someone could claim at least 5-6 deposits on Lava, Desert or Iceworld and don’t let mine them. Homeworld deposits are poor and useless, but it worth on HW moons.

No way. You can sucessfully destroy tanks with SV torpedo launcher, you just need some luck and less lags, but I would not like to see some flying tanks around me.

Yes, it changed, but you still can mine sucessfully, if you set up your drills exactly as on my SV miner

someone could claim at least 5-6 deposits

And not for long, I assure you

Anyway it would be better that to have empty planets like now.
In the same time you always got PvE Phoenix for ere and zas.

You didn’t explain why.

You can sucessfully destroy tanks with SV torpedo launcher, you just need some luck and less lags

For destroying stationary HVs I got macro fire.
Less lags? How can you evade 5 fps battle on GG, my dear? Especially when limits have been raised?

Yes that would be perfect if you could adjust that

I agree with you that a lot would have to be changed so that pvp is fun again … just the fact that it is forbidden to make a NAP. So you could, for example, claim GG completely for you like it did last season red jvi and Lea …

If you change the range of fire HV, then you need to change the range of fire BA. I’m not saying it’s good or bad, I want to say that it is also necessary to do. HW this season is not interesting in terms of PVP, at all. But at the same time, I am very happy that it is there that the first fragment is located (I think now it is no longer a spoiler). Because it forces new players to fly out into the PVP world and get to know it. I really hope that the second fragment will be on GG, and some of the subsequent ones on Eton. By the way, what about Eton? And what about events in general?

Putting the fragment in pvp is in many ways the most stupid thing i have seen; IF the goal is to expand the universe!

Tho, most people dont attack when going for the fragment, since normal pvp players want to find nr 2 also.

But one idiot faction, setting up a base next to the fragment, and boom, you will never see the 100 fragments needed for next chapter of the story.

Putting the fragment in pvp is in many ways the most stupid thing i have seen; IF the goal is to expand the universe!

The goal is to create an interesting gameplay. And in this context, the fragment in PVP introduces players to the world of PVP. And about installing the base next to the fragment, first of all, the POI with the fragment should have LC (I just don’t remember whether it is there or not). Secondly, in this game there are no bases that do not fall, JVI will confirm my words. And the advantages are obvious the player arriving in HW (and the planet and sector) sees an abundance of resources and he has a desire to dig them further with all the consequences. First death, creative mode, second death, creative mode, etc.

Makes me think of how targeting works on turrets. It’s possible to checkmark what you’re prioritizing right?
Maybe that can be leveraged for detectors?
It would be great in space as well when asteroid belts get really crowded around a planet.

The goal is to create an interesting gameplay. And in this context, the fragment in PVP introduces players to the world of PVP.

Interesting for who though? I can’t imagine there would be anything of interest to a PvP player in blowing up my ship. A sneeze would likely be more interesting.
A player interested in an introduction to PvP can very, very easily find it. There’s always someone asking for 1v1, or sv vs. cv but only if no hv near ba on the bbq at sunrise, or some such. It’s a lot like Meg Ryan ordering apple pie.

Putting something behind a PvP hurdle means that content is, effectively, exclusively PvP. Cool with me, but that’s what ultimately winds up happening.

No, I can only change the range differently on PvP and PvE.