is there a Patreon level that gives you priority when you want to log in but the server is full?
I’ve seen some other servers do something like that. Never caused me to join, but I wanna play

and have money in my wallet.

Downside would be for anyone not a patreon of that level as someone would be getting kicked to make room. Capitalism is hard. I don’t like it, unless it works to my benefit.

Gonna go hit refresh… just a thought which I wouldn’t be sharing if I could log in.
Kveld

Its not something offered as far as i know. Does sound like an idea though. Maybe have allocated petreon only slots.

This will be server and game dependant though, knowing eleon thats probably on the list for 2030s great new “feature”

yeah I don’t think that’s possible with this game. it would also kind of suck if there were no patrons online and there were open slots being blocked

Welcome back,
as you said yourself. There is no priority system that we could use. Eleon would need to implement a queue system under the hood.
The only thing which is possible is to kick non-patron players as soon as it gets full, which can become quite an unpleasant experience for them.

There are ideas to create a HWS RE server in NA and link them via Cross Server Warp.
But neither do I make enough money to support 4 servers and pay over 1k per month for all of them, nor is it at one point maintainable.
Will think about it and for now allow 200 players and just see what the game gives us I guess.
The 250+€ per month should be used to its full extend, hm?

Thanks Rexxxus,
not to get technical, but I could also try to just be a little more patient

I agree that kicking out patron members isn’t a sustainable solution.

It’s been a lot of fun being back! Thanks for all the work you put into it.
Kveld

a lot of times it doesn’t take long for a slot to open. some days are worse than others

would an afk kicker be an option?

Hmm, yeah, plan B. Bit tricky what counts as AFK, how long and so on. But better than kicking non-patrons

I say if they haven’t moved the mouse in 15 minutes, they need to be moved

Best for me would be a 100player max server with RE with only 6 month wipetime.

the 2 other servers NA & EU are not vanilla at all. they are custom HWS configurations that have been going for 5yrs and are the main focus of the server owner. RE is a side project put up as a time filler while the universe is being constructed for the main servers. population will undoubtedly explode once the new season starts.

I have to admit, server performance appears to have suffered since I opened my big mouth…
Ever since it was changed to 200, I get a “could not connect to server” message more often than not. It’s happening even after a restart.

I wonder if maybe the 200 player limit should be considered a successful experiment in that we have found out what happens to the server? Should we maybe confirm by moving back to 150 and taking a temperature?

It could also be completely unrelated and just a coincidence. Just feel a tiny bit responsible since it was my comment that got the player number increased. I’ll leave it in your capable hands 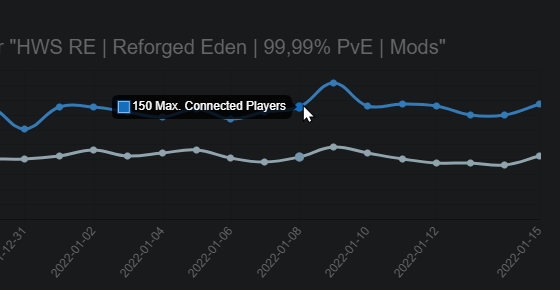 but then it normalized to ~150 anyways.

I explained in Discord who is responsible for it

But in the end it is a combination of course:
large universe + people who visit them and spam the database with data.
Either small universe and lot of players
or large universe and less players, since it takes longer to fill the database with junk then.
The next patch will hopefully help a lot with it but for now the benchmark can be ended and we stick with 150 players for now.