Getting tired of this 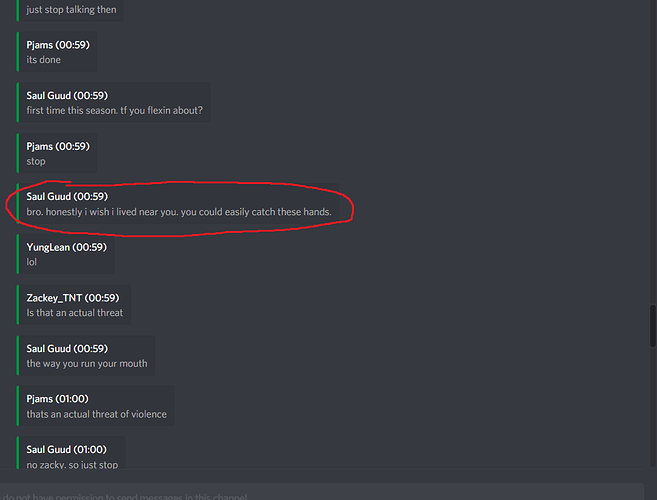 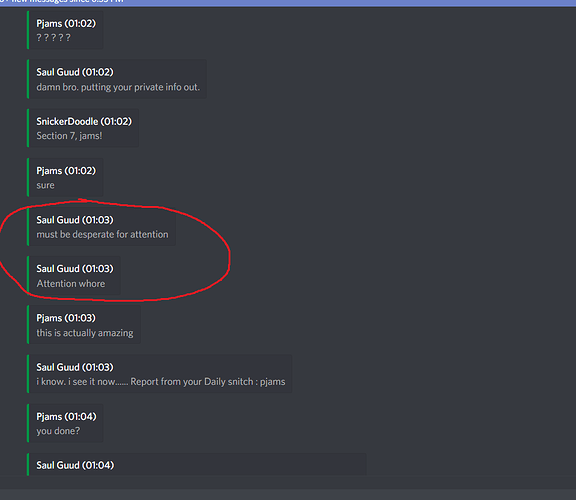 what do I see here? Real life threats?
@Solid_Snake can you take a stance on this?
Otherwise it doesn’t look good for you mate.

I didn’t know the words “I wish” could make things happen. Also he only displays stuff in angles to make me look bad I even said that I was not a threat. I would like for pjams to stop only putting the bad stuff that I do and actually put the whole conversation on there too. like how he started being toxic to bait me. In reality, I could care less about the guy. but if he has such a problem with me on this server (since he and his crew are the main ones). Green light to ban me. Great game. Sad Community because of some who take things too seriously, or “act” like it hurts them just to report me. Thank you.

t I do and actually put the whole conversation on there too.

If i may… The whole context of the conversation was likely looked over aswell. For the purposes of not having a 10 picture page report i figured the actual conflicting issue would suffice and Rex or whoever may look back in the chat logs if they deem necessary.

like how he started being toxic to bait me.

Sad that now you wanna act like im the one out here trying to ‘bait’ folk. You did your own grave when you barge into a conversation i may be having with random folk. with no relevance to you or ABN none of it.

Sad Community because of some who take things too seriously

You literally gave me the 12 year old xbox360 ‘troll’ of a threat. i dont care anymore i could have made way more reports. Now im just fed up. Every time you log in @Solid_Snake you feel you need to mock me or anything for any reason.

I am honestly just sick of it. its been 7 months and i am just done with the harrassments.

No i am not going to press b every 5mins during my fun play sessions just to check if Saul is online just so i can ‘mute’ him.

directed towards me much?
I was in no way even being toxic at this point. till you started mouthing off m8.
for the good of my faction I have been tryin to relax more on the chat but when theres someone like pjams constantly using passive aggressive tactics to bait someone. it makes my experience on this server less enjoyable.
Rex. make your choice. im done argueing. I unlike pjams would rather not waste your time with petty reports.
And on a side note, Can you please ask Pjams to stop accusing others that they are me as an alt. I don’t think that player would appreciate that kind of harassment. That’s what I logged into today.
In my Opinion. Ban us both.
Good day to you both.

someone like pjams constantly using passive aggressive tactics to bait someone. it makes my experience on this server less enjoyable.

Please. merely bringing up that you came back from EU side and likely lost is pure banter.

Telling someone you wish they lived near you so they can catch these hands… not banter.

Again. just sick of all this.

you always claim everything is “banter” as to make it something irrelevant. your doing a good job pjams keep it up with your shenanigans. as I said before “I wish” doesn’t make anything true or even the possibility of it happening
.

Hey,
I don’t want to ban anyone here. Especially since all of this is coming from a root issue happened in the past.

I really wish and hope you could be “friends” at least until Alpha 10. Is this possible?
In Alpha 10 I invested a lot of time to push the rework of the Chat system to Eleon.
So you have permanent mutes. player and faction. We get rid of toxicity rules in some ways and it’s just becoming more clean I think.

So bait or not, banter or not. As I said, can you guys be friends until A10 please or ignore each other somehow?
A10 is “around the corner” and overall you still have fun with the game / HWS, no?
If you don’t respect each other, try it at least in my favor.
Let’s try this way here for once.

can you guys be friends until A10 please or ignore each other somehow?

ive asked him in PM if we could both agree to stop the nonsense at least on any public HWS platform, global chat, discord etc.

to which he berated me calling me names etc. ive tried everything.

I was there during that conversation as seen by the screenshots.
I had no issue with the casual banter before, as you see I’m talking about “taking the L” referring to loss pvp. However, saul crossed a line that needs to be clearly demonstrated.
Real life threats are in no way an acceptable response to “oh haha you lost on EU”

What doesn’t seem to be understood here is that this is not a case of getting along or muting the player, it’s a case of real threats leveled by another player. Now, it doesn’t matter what’s said and done after the case, the intention is clear as days, and it’s irrelevant if he can act on those threats or not, it’s not acceptable behavior.

That’s all I will say on the topic. Looks like it’s already been resolved.

No you! Mr. Non threat

@Solid_Snake “honestly” and “I wish” is the perfect form of “could make things happen”. You contradict yourself in hypothetical statements even though your hypothetical wish and honesty transmit your honest intention of causing damage to someone in real life.

Well, it can hurt a lot to know that there is someone who would hurt you in real life. Even though Pjams likes to poke toxic stuff - he got his lessons himself regarding that…
But overall this is even an illegale act by law, instant ban offense in terms of Discord Terms of Use and other laws. You can deny it as much as you want but you should have used other words in the first place.

So your stance on this and comparison of banter and such threats are out of place.

You like to play on the “welcome toxicity” server, with bunch of toxic guys, who also run the whole server because the owner don’t give a shit; but you feel baited to banter regarding “losing on NA”? That sounds weird.

And on a side note, Can you please ask Pjams to stop accusing others that they are me as an alt. I don’t think that player would appreciate that kind of harassment. That’s what I logged into today.

I don’t know what that means in detail but I hope @Pjams would not behave so silly without real identity proofs.

Anyways before it turns out even worse and I got nothing I could work with I’ll close this here.
You get guilty as a serious warning combined with 50% RP loss to not repeat any threats like that anymore.
And as said above: make an “ignore agreement” or whatever until Alpha 10 between each other, please!