Harassment and theft on a pve playfield

What happened?
=> I was playing on Freelancer HQ, I was killed and trying to recover my backpack and repair a kriel spore to get it out of the ground. Another player started blocking my efforts. He also claims he took the stuff out of my backpack and was bragging about doing pvp on a pve world. He was also using a drill to remove the ground from under me, using the drill to pile soil around my sv and to block the entrances to my CV. All the while using condescending and abusive language. If I wanted this crap I would’ve gone to a pvp area. He interrupted my game for almost an hour and even chased me out into space continuing to harass me and
block my ship. He was ramming me or something knocking a ship in the dock loose which killed the power on my ship. I enjoy the game and stick to pve and play in cooperation with other pve players. This guy was on the wrong playfield for this kind of behaviour.

On which Playfield?
=> freelancer HQ

How can we help you now?
=> this guy is abusive and harasses pve players, I have screenshotted the kind of language he uses…; answer me this. Is this the kind of player you want on your server? Seriously? I want my things back. I would have recovered them except for his interference. OR, tell players on PVE worlds that it is really also PVP.

I have a dozen or more screenshots of his verbal harassment, and some pics. Just tell me where to send them.

Private Message @RexXxuS either on the forums or on discord with screenshots, as well as what was stated here, as he stated he was no longer dealing with forum disputes. Disputes should be made private, not public…

Also, the accused player should be mentioned in the private message as well…

Attached screenshot is Rex’s response to a previous forum dispute 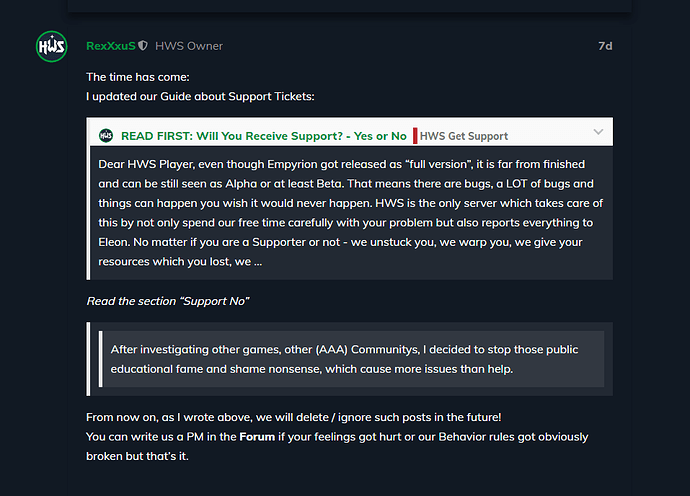 So playing PVP on PVE playfields is OK?

No, but report it privately. Not publically.

Taking a backpack is allowed except on the PVE starter planets. Drilling under you in PVE, burying you in PVE, burying your ship in PVE, ramming anywhere, and abusive language anywhere are all against the rules. The main admins are probably asleep for a while tho and will likely need more information like the screenshots and the name of who the problem was.

I sent Rexxus a pm as “chaotic” suggested with all the info you mentioned. I kinda figured the backpack was a wash but the aggressive behaviour seemed out of place in a pve environment.
This guy and his buddies struck me as a bunch of griefers anyway. Thank you for your input.