Holla Senor got a Big Request Hope Community will Respond

What up first to Everyone.
Im Asking to Collect “Votes” from Eu & Na to let Rexx Change that “oldskool” bounty system.
We all Like it we all Love it … but in the end some “we say selfcalled pros” all time set just 1Cr bounty to see (on the board where the ppl are edit : i know actualy 10m first but ->) i mean “makes no sense” at all 1cr … no one will get his A… up for it …
So i Request for Bounty Hunt system “real hunt offers” No 1cr Trolling more …
a Minimum of 100k ! (90% of the Bounty system only Veterans use…)
maybe it will helps with bugs too if people not Spam 1Cr bountys.

edit : “we got some probs multiple days means “bot perm spam: 1cr bounty on you that 1hr long” self after relog (multi times) it not go away to prevent that too”
Cheers to all Make your Vote Love or Comment no Trolls pls and no stupid awsners ty stay calm and relaxt 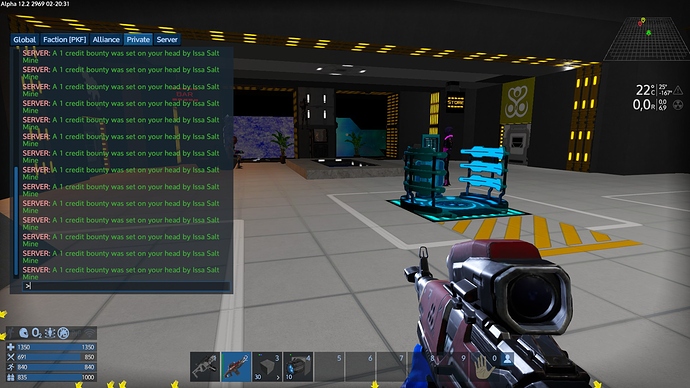 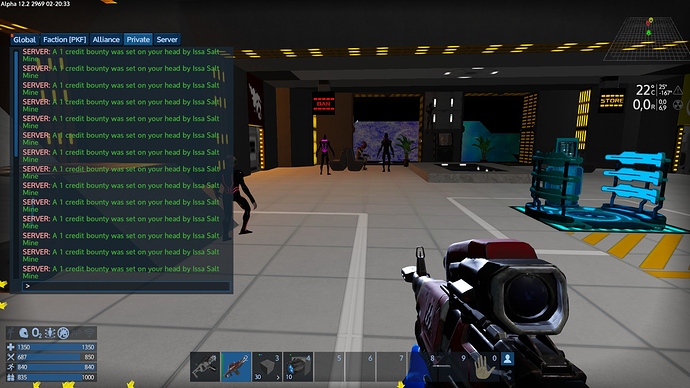 Ehmm, I’ve got good news for you Senor! You have to have a 10mil credit bounty or more for players to see what system you are in and even more to show your exact coordinates. Yay!

I kind of agree with Flicky though.
1 credit bounties doesn’t make sense.

Edit:
Since you want votes, I moved the discussion so people can actually vote up top left corner.

yeah but if you need “10m” why 1cr then still let it in its from alpha XX its not even a waste of money its pure trolling actualy and in the end maybe less server issues with Bot ?! cause ppl dont spam 1cr bountys (without sense)
Cheers

No ability to downvote?

Don’t change it. Some people use bounties to be able to tell who they killed when they kill them without checking dashboard.

Yeah it looks like the guys from ABN are really bored over there and use the Bounty System to troll the people on NA and EU.

Make the initial Bounty higher and dont let the offer for the bounty get changed for one week or so.

I heard I should post here, that this thread is for me!

I love that you have your very own group

The trolling from ABN goes on… It´s annoying when you get all the time a server message that a 1-Credit Bounty was set on your head. Daily…

A lot of the new players are disturbed and most of them are confused and dont know whats going on. It also doesnt help when Chaotic keeps trash talking in Discord when the people complain about this.

Using the Bounty to ping every player on the server multiple times shouldnt be allowed.

Using an ingame feature and giving someone advice? That’s an exploit!

So I’m currently confused. Is this a poll about a specific feature or a witch hunt? Not sure the purpose behind this time wasting drama. Can we stop playing the game of The Troll Kings vs Noble Knights of What’s Right and Good? If there is problem with an individual talk to them. If nothing happens, get a moderator involved. The community doesn’t need every bit of dirty laundry aired everywhere. The constant 1ups have to be draining to the admins. Makes me wonder how much of it they will take before just calling it quits because of the childish trash.

Damn ABN and their

Entirely legit use of the bounty system.

Fun fact: At one point in time there was no notification given when a bounty was set on you. Until someone got sad that they did not notice a 10 mil bounty on them and logged off in a secret PVP space base. So they made a report because they lost (And there is no such thing as being a good sport on HWS apparently) and got it changed. Guess who set the bounty that caused the frivolous report?

I guess it’s been a few days since someone reported ABN for following the rules, must be jonesing for that sweet report justice rush. I seem to remember at one time frivolous reports were a punishable offence, I have to assume that is not the case anymore.

One more fun fact: Like most times the server has had a rules change to cater to a small section of PVP poor-sports the Player from the initial bounty report I mentioned no longer plays on HWS, meaning that the additional work put in to stop ABN from gaining some advantage well within the defined server rules added zero player retention, and was simply a Time cost to the Admins without real benefit.

Now I know the following statement is not going to win me any internet points, but if everyone making reports spent all that energy on getting better at the game instead of trying to change the game to fit what your currently doing you would be having a better time. I was a scrub once too, and instead of crying about it I got good. 99% of multiplayer PVP games don’t let you lobby to make PVP softer. And honestly, the power faction/alliance when I started was waaaaaaay more oppressive than ABN ever has been. Imagine a Golden Globe with only two 1km square sections NOT covered by bases.

Edit: Btw Senor, you only seem to have a 32 cred bounty, and while that stream of bounty msgs seems aggressive it’s at max only 32 times. If you make min bounty 100k I will happily set 32 100k bounties on you. I just wish the bounties were good for something now, they don’t give location (#/#/#) anymore unless your guilty I believe

It was done by special request after Rexx said he would make me a troll tag and I gladly accepted my new title.

Also, this post really isn’t too much to do with ABN guys, let’s try to keep it ontopic to just the console spam else this topic will have to be cleaned up…

That “topic” is about Change the 1cr bounty method to 100k minimum cause first with 10m you see the people “coords” infact 1cr brings nothing only that the “bot” maybe get into berserk mode and with that overflood maybe anything break to reduce the “delay” of bots (ocd etc) if ppl spam 1cr bountys (no matter if its now abn / taw / red who ever) its just a general to reduce that delay and we all can enjoy better HwS i dont point to anyone ^^ but i figured out in that 3days who i get perm 1cr spamms the ocd command was delayed 30sec - 1min permantly in that time :-/