How to be prepared for PvP: Before you enter it

Welcome! I hope you’re looking forward to some good information about what you need to do to stay prepared for pvp. I will almost certainly ramble a little bit on everything I cover, but it’s important for you to read all of it. Any information I cover can and likely will be the difference between a win or a loss. Lastly, if you have any questions at all, send me a DM in discord, @ me in the HWS Discord, or ask me to join you in voice for a discord stream to help iron any questions out.

How to be prepared for PvP

I’m just entering PvP to mine

If you are ONLY entering PvP to mine: You don’t need tons of stuff. Just keep a teleport base, a few small SVs, and maybe an SV that can take a few hits built inside your factory so that you can spawn them easily. Also, be sure to cb:sethome before you enter pvp. It prevents you from getting spam killed. It also allows you to turn your ship off, die, respawn inside your ship, and cb:gohome with your backpack and everything you mined. IF your ship can survive long enough for you to do all of that.

When you (or your faction) want to enter pvp for a fight, or even plan to enter pvp to mine, you need to keep a few blueprints built. I strongly recommend keeping at least 3 teleporter bases, 5 10 block SVs (or some kind of cheap SV you can fly) as well as 5 PvP HVs, 5 PvP Bases, and a few PvP SV’s. (3 or 4, unless you plan on fighting primarily from the SVs, then 6 or 7) Keep in mind, I suggest EVERY player who plans to PvP has that many HVs and SVs, preferably at least 1 base as well.

You will NOT have time to stop and cook ships or additional bases during most fights. Therefore, you need to keep a few cooked.

If your faction operates on the hive system (one person cooks and spawns everything) I highly recommend you plan for at least a few additional players to have ships ready. Whoever has all the tanks cooked is forced to sit at base and constantly spawn ships for everyone, that’s not fun, you also need to keep in mind that person may need to log off suddenly, or may not be on when the bases you left in PvP get attacked.

Inside your base, you should have a box that looks like this 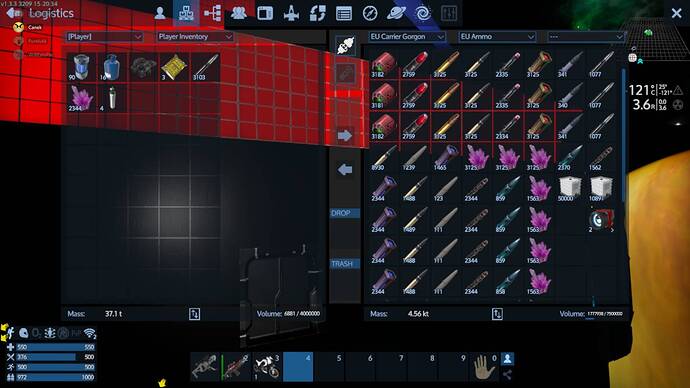 That is the box in my EU Carrier CV, I keep lines of base and HV ammo ready, this way I take the right amount of ammo - enough for one base, two bases, etc, I just need to grab an additional line of ammo for each base or HV I plan on using. However, do NOT take stacks of water or XXL Thrusters into battle, I ran out of room in some other containers and ended up throwing those into this one.

I also suggest you keep fuel in each of those lines (I usually put 100 fusion cells in each) I just forgot to do that with this.

I also personally keep turrets ready in my base, I grab them in an event where my base is under attack so that I don’t have to try to buy them off the market when I do arrive at my base.

(Keep in mind, when you teleport to a base the shields go down, so teleporting in the middle of an assault may be a bad idea, you may want to fly over in an SV depending on how many people are attacking you)

General Preparedness (minimizing inventory content / being prepared for a fight, should you be offline or in a mission)

When you enter PvP, no matter for what reason, you should not have stacks of ammo, gold, or rations. ( you should have those when you leave

) So, make sure to empty your inventory of everything you do NOT need (don’t remove your ammo from your inventory) This rule does not apply to @OneMonkey who runs around with stacks of loot to encourage PvP (seriously, he has tons of loot on him for most fights) Hopefully, that will encourage a few of you out into PvP, Monkey, if you want to put a comment in with what you will have on you for your next pvp fight, or what you had on you for a previous fight, that would be awesome.

Being prepared for a fight mostly just goes back to make sure you have enough pvp HVs and SVs built in your factory for a fight, as well as lines of ammo laid out, you don’t know when you will be attacked or when you may have to go defend a base if you leave them in pvp.

No matter where you are, you should always have a way back planned. I have had countless times where I am solo defending a base, because the four or five other players online from my faction forgot to cook tanks, were exploring across the galaxy, or didn’t make enough ammo to come out.

Personally, I keep about 15 HVs and 8 SVs cooked, as well as 4 or 5 bases. This is because I frequently end up having to spawn crap for someone else. Don’t be that guy: keep ships built in your factory and have your ammo ready.

Keep an eye out for my HV PvP Building guide coming out in the next day or two. Remember, if you have any questions, ask. I am WillEatsPie in discord as well, you are welcome to DM me for clarification on anything.