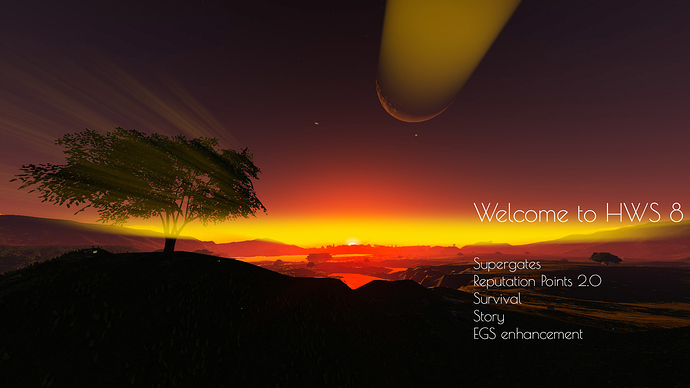 finally the promised HWS 8 announcement!
And without a lot of words we want to show you the teaser @Achilles made for us.


Thank you so much!

I have announced it in a bigger scale already before the release so please go ahead and check them out:

To me this is unacceptable. Things like tackling and exploiting and glitchy turrets and stuff should always be punishable. To have a no rules sector encourages the very worst kind of play and will just act to encourage the worst of HWS’ players to exploit and cheat around the rest of the universe (Say what’s to stop an ‘illegal’ ship warping out into normal space?) And if you can’t stop it, it just create more work for you and the police. It would also become a bit of a salt-fest i imagine. Es…

Good question. We have to see if the IDs are valid or not. In best case all are converted to Vegetables.

But since I teasered already so much please let me just mention the additions, status quo and missing information.

So far some used them already and enjoying them. Only problem is the visibility. I changed the Alien Admin Core with a normal Admin Core now. This should show the Supergate globally in the orbit. I also shared the Markers public. Just open your Map and select the Markers at the very top right.

If the Supergates are very well accepted we maybe implement them in a bigger scale, replacing the normal K-warps to prevent yolo jumps (until Eleon implements EMP or other ways to prevent that)

We wanted to give it another try and created with a lot of work the PDA walkthrough.
After we saw it wasn’t that feasible we changed it yesterday to a way more easy “stuck free” use case.
Only downside is that player with the previous PDA version might not complete their actions.
Will think about a solution here.

The EGS Flying City got moved to ECC as announced to improve the performance and allow the City to be played more often later on.
Keep in mind it is still under construction here and there and will grow more and more after some time (a Mission included)

Sorry for the confusion about “Your get 1 RP per playhour as solo player”. Unfortunately it was not possible in the end. Hopefully in the future.

The rebalance of all Origins will be revisited too. For now we observe what Origin is playing which role.

Just keep in mind that you have now couple of NPC Traders in the Universe selling the Yellow Alien Container regulary.

What is left are the playfield description infos.
Keep in mind that you always can check the latest correct limits in HWS Connect > Universe.
They will be updated tomorrow. Rules of thumb are:
PvE: 2 faction and 1 private stuff
PvP: CV 100 max. Blocks. 10 Alliance Faction Bases

Sorry for the not so catchy Announcement text and that some issues happened at the beginning.
It’s very difficult at the beginning of such a big patch, the biggest so far, and handling 300+ players on 2 servers alone.
Nevertheless thank you @hopskotch for not only coming back to HWS but also helping me spawning all HWS Garage ships on NA as well as @Achilles spawning the ships on EU!
You helped a lot!

Last but not least, as often said: HWS 8 is basically a new era with so many new stuff that not everything is that good again. We will iterate over everything until it is “perfect” again.
Thank you honestly for being patient until then and we are trying our best meanwhile and beyond!

This is awesome! Fantastic work to all involved

thank you RexXxus, Hopskotch and Achilles!

We getting back the starter planet colonies by chance?

Wiseman I found something else we can agree on. PVP Zone with no Rules? I agree with Wiseman here Rexxus I think that is a very very bad idea. For one Noobs to the community may stumble in their and if they end up loosing everything to some cheap moves they are not going to be happy. Word may get around wrong that there are NO RULES on HWS. That would be bad for 2 reasons. All the good players will leave or NOT come. All the cheaters expoiters and over all lower forms of PVP players will flood in. Like WM said though the no rule thing will be observed outside of those PF and the excuse will be but I seen there were NO RULES. I do not think anywhere in the server should be no rule because last season I was here there were all kinds of issues with people exploiting all kinds of things. I know it was hard then to enforce things. Allowing people to do whatever just bad. If that is going to be what those systems are I for one will never be there. I will never do the cheap underhanding things like Tackling as that is not really winning at all. That is being a coward.

Other than that Rexxus I alread have over 8hrs in so far and just wow. Not even seen everything yet and just wow is all I can say.

So thank you Jascha, Rexxus, and the rest of the HWS team for your hard work.

Hi Dawg, I’m glad we agree on this!

Just to let you know I believe Rexxus may have answered this for us both on another thread and stated that rules would apply. Here we go i’m gonna go and find the quote.

This Planet does not have any HWS specific limit rule. This is a new planet not even the EGS Organisation knows about it yet. No Anti Grief there, No Class limits. It’s a free for all. (only our HWS rules are applied there).
If it’s worth it? Up to you…

So i’m thinking HWS rules DO in fact apply there (Fingers crossed!

I belive gravity vent overboard in some places…
Class 1, 3k blocks and almost 3G… soon we will be flying with device only SH/HVs

If im gonna be anywhere on Empyrion, it’s gonna be on HWS with my team!! Best place on the internet today!
Great to be back! Love this community!