after further discussions with Eleon another change got applied. This is a bigger one, even though it looks small: 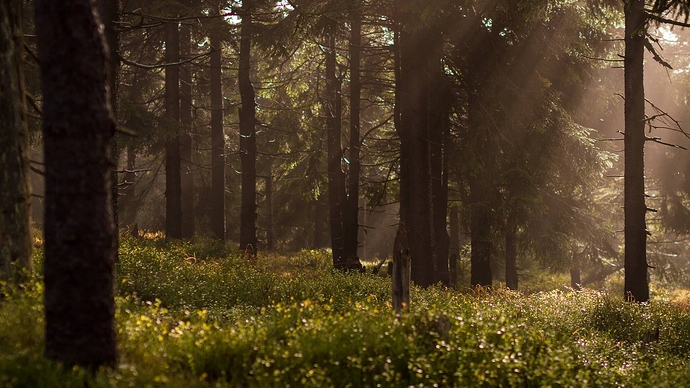 Once Eleon gave us the possibility of the HWS Config, my main goal was to increase the performance in PvP. Some values in Vanilla were identified as too lag heavy, so I reduced the Rate of Fire for Gatling Guns for example.

Over the years, PvP got more action paced and to be honest I lost a bit track of the original philosophy, cause PewPew and player desires were more fun to fulfill.

Back to the roots

With recent PvP and performance issues, combined with observations from videos and Client logs I’ve sent to Eleon, we came to the conclusion that I messed up.

Main issue: Drills were too overpowered. We are not only have 10 drills instead of 6 but also had insane radius and drill damage.
But also some rate of fire of weapons only caused more performance issues to the server and to you.

Normalized with some extra

So I went ahead and revisited the HWS Config in some hours. Drills got now properly balanced with the 10 extra in mind that we come around the Vanilla value.

Turrets and Weapons got rebalanced to have slower ROF but in exchange faster reload times here and there.
So the total performance pressure is about the same as Vanilla but since you don’t have to wait so long for reload times, the action is still faster than Vanilla.

Still, the action paced speed got slightly lifted because the reality check proofed: the game is not ready for it yet.

Vanilla means “Default” Configuration. The default values in the Config, Eleon has configured.
And while configure does not even mean “good” or “bad”, it does mean that the Developers worked with these values while programming and testing features.
So if it comes to performance we are responsible to have a base line together with Eleon.
As I said, it was of course my fault, I do apologize, also to Eleon, but it does mean that the experience for some will be different now.
You have to adapt again. Performance is our Judge.
More importantly: please let me know if you can notice the performance boost the next days.

If Owners mess up too hard with such things it could mean bad experience for many. So again, I can’t stress out enough that everyone who playing around with the config out there should be careful and I will make sure to keep focus on such small but important details.
Since Alpha 10 was out - and changed the Drill performance to worse in combination with our “old” Config - I had not much time to step in to balancement at all.
I will shift priorities now and keep working on it.

As you realized already with Inflation and Proximity Alarms there will be coming more changes and additions to make it complex in the background but easy and fun for you as players outside. The new HWS Connect is a good example for this.

Thanks for your attention and please feel free to always reach out to me if you think something has impact on performance which I can maybe improve here and there.
As I said, a game (HWS) can be as super awesome as possible, but if the performance is not super, then it does not help much in the first place.

I don’t think you messed up at all.

Rather you took what would have been a boring experience in a game and made a community of it. I don’t see the problem here.

What has drill performance to do with lags during pvp which are actually the problem? I haven’t noticed any serious lags (besides microlags) while mining.

Only lag problem related to “mining” I see is that many weapons still damage terrain during fights.

Having said that I’d prefer HWS config to differ from vanillia as little as possible because things like different thrust values for engines or different material weights make it much harder to design stuff for HWS.

What has drill performance to do with lags during pvp which are actually the problem?

Terrain rendering is the problem.
The big 30 player PvP fight on Golden Globe for example. 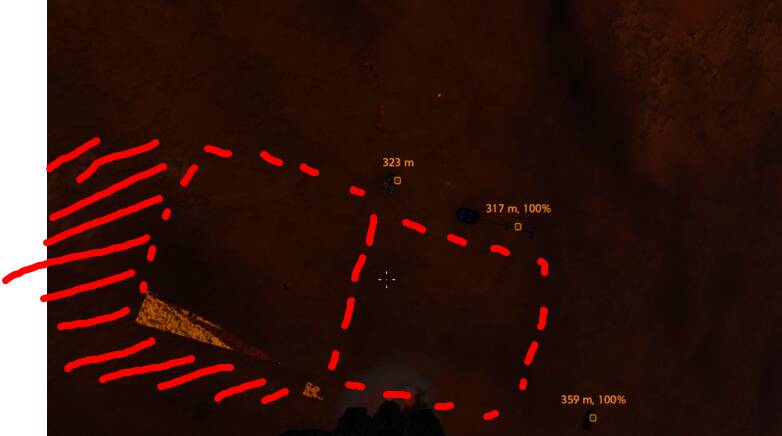 image.jpg782×436 19.4 KB
If drilled chunks are rendered and derendered all over the place, it is similar like DSL. A big strain to performance.
And to drill so crazy much, the boosted Drill changes motivated players to do so.
But also turrets with a reduced ROF do stack up a lot if 10 HVs, with 30+ turrets are shooting at the same time with changed values.

It’s all a fact and benchmarked, so I keep it short.

different thrust values for engines or different material weights make it much harder to design stuff for HWS.

Yes I know. Some do not like it. But that is always the fate of someone trying to improve.
If I would not do what I’m doing, there would be no Marketplace, NPC Trader, Gold, Missions and more in Vanilla…

You did what you could to make the best server possible, and it’s easily the best server in the game, with highest player count as well. And you didn’t achieve that by being similar to vanilla.

Alfa10 is one big lag

@RexXxuS , your work is incredibly! You could not have known this was a issue. Plus, telling by the reaction of the community, it seems no one really noticed it.

I do have a few questions. I’m a Military man, so I appreciate direct and blunt! When you say weapons going to more of a vanilla config, are you taking about damage, reload, rate of
fire, distance? Did your you damage model, e.i. pluse ultra effective on shields and so on, change as well?

How about revert weapon and turrets quantity to Vanilla?

Forget the ship, hv. Take assault rifle and go in pvp. No lags at all

I appreciate all the time and effort you spent on this Rex, but after discussing it I believe you should also up the damage slightly to compensate, unless reload times are 0.01 minutes, that nerfs HV’s Bases and SV’s more than anything else, most large battles last hours anyway. I flew a singular tank against 6 SV’s for 20 minutes last night and it held up the entire time. But I rarely got an SVs shields down because another would just tank for it. In total, I used that HV the whole fight last night. Almost 4 hours, eithout dying. It shouldn’t have lasted that long against 3 enemy bases 6 enemy HV’s and 12 enemy SV’s. (total number) I worry this will increase the SV’s ability to dive bomb HV’s and even increase the length of battles. When will these changes take place? Can you buff the damage output as well? Thanks. Correction, my HV should not have lasted that long. I enjoy long fights, I even wish it had lasted longer!

Large battles shouldn’t be made shorter if you ask me. That’s the fun about them, the fact that they last long.
Can’t expect big fights to be over in 10 min

If drilled chunks are rendered and derendered all over the place, it is similar like DSL. A big strain to performance.
And to drill so crazy much, the boosted Drill changes motivated players to do so.
But also turrets with a reduced ROF do stack up a lot if 10 HVs, with 30+ turrets are shooting at the same time with changed values.

It’s all a fact and benchmarked, so I keep it short.

So actual problem is terrain being drilled in place where fights take place? I’m afraid this will be the case no matter how many drills are allowed or how effective they are since people tend to drill near their bases

Yes I know. Some do not like it. But that is always the fate of someone trying to improve.
If I would not do what I’m doing, there would be no Marketplace, NPC Trader, Gold, Missions and more in Vanilla…

In that case I hope these changes make it into vanilla

Also if effective ROF is nerfed then damage should be increased and/or some weapons (lasers) should have explosive damage added or fights gonna take even longer than now.

Reading the EWS changelog and this post, drill damage and cannon damage was changed, but everything else was ROF etc adjustments. Does everything else from EWS still apply like:

Or is that kind of stuff removed too? I know vanilla means default but I don’t know if you mean everything is vanilla now, except we have 10 drills instead of 6 and faster reload? Or, those specific things mentioned like drill damage/ROF have changed to vanilla, and everything else from EWS is still there?

Either way, I echo what others have said here. You didn’t mess up, just running the best Empyrion server out there, no big deal. 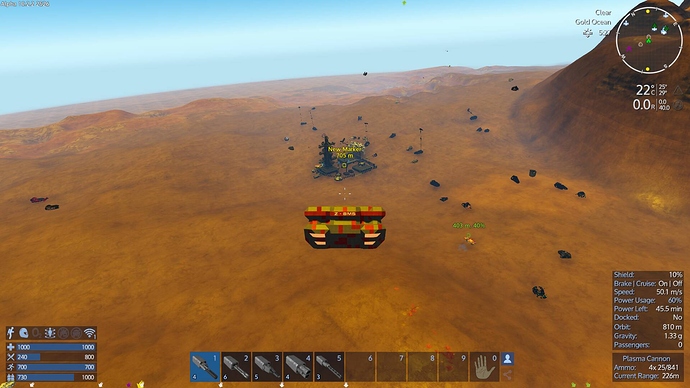 5 minutes is a bit quick.

I say nay on the 5 min uncore delete. I prefer to get the fruits of labor in the form of SVs, CVs, BAs and HVs.

the problem with lag is the render of mined chunks? and how changing drill will reduce it? by making mining less atractive? I doubt that will work, perhaps the fix is instancing big combats some way, maybe separating the mining planet and the combat planet or forcing to combat on space trough gameplay.
Or counting the number of players and blocking terain mining and terrain loading after reaching a threshold

edit: I’ve been mining GG surface for a while, seems I’,m getting around less than 1/3 what I used to get, are you planning to decrease OCD price or balance gold value somehow? no idea how to get 700M in one season to reach OCD lvl 7, and with gold being so hard to get more it will be hard to save money between seasons