At least need to be tweaked by a lot increase cpu numbers in millions. not thousands like now.

CPU will give the freedom to build crazy stuff again , like a cv with 8 artillery turrets that moves like a snail , hell ! put as many turrets on your base as your CPU allows to , that is the freedom it will bring if done the right way . 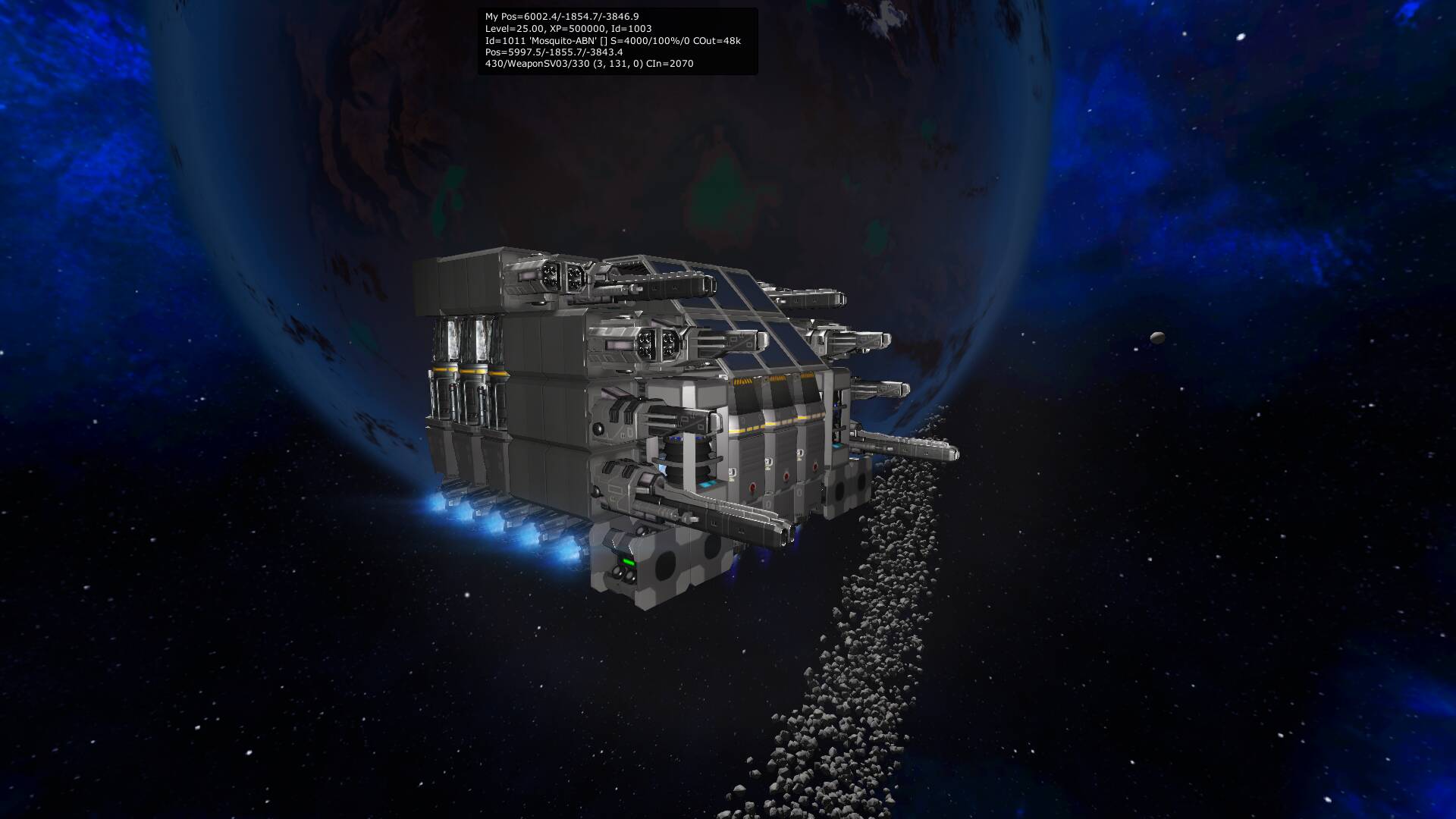 There is another BIG problem. You can have 8 artillery but no blocks since blocks takes away cpu

I’m beginning to be glad I burned out of Empyrion.

Did you test it , i did , blocks don’t even take half the CPU of a build , it’s engines and RCS’s that do . If that micro is all you can , try better

Indeed i am not happy how CPU works for now , needs al lot of work to become better balanced , as i sad most thrusters are useless now , same with the T2 RCS .
This is not " the right way " , i hope for a quick update from Eleon .

For NPC cores i would advice to allow them only on bases , makes them better save havens in pvp compared to the attacks they have to endure .

Comparing empyrion to reallife is never a good idea. Empyrion is in no way realistic, and if you want it like real life you can go outside.

Thats just your personal opinion and your factually wrong on that Dark. Empyrion is as a matter of fact trying to imitated real life and real life building materials as much as possible though it doesn’t always do it right 100%. I mean weather? Cold, hot, radiation, and can’t breath underwater etc? Requiring food, oxygen to survive? That is in fact trying to imitate real life. I mean it doesn’t take a genies to figure that one out dud…

Also, vanilla carbon blocks don’t require diamonds to be built which is in fact realistic. Its Just that in HWS diamonds were used to restrict carbon blocks which doesn’t make any sense. If you can’t take that fact, then maybe you should take a walk outside. I mean you don’t even play Empyrion Dark as you have said many times before. So… yeah…

^“Empyrion has–what we think is –a good mixture of both, although we bend the reality a bit more than maybe Minecraft or other more real-world survival-focused games. The focus of our game is, that players have fun. We do not want to annoy them with too much reality. It is a sci-fi environment after all…we think the excitement of something that sounds reasonable enough to work with the current sci-fi themes is nicer, than something that needs to work with actual science…it is more important for the community that their stats make sense in the game, than being overly “realistic.” Maybe we can put it like this: If something is consistent in its explanation, it is not a problem, if it is not really realistic.”- quotes from an interview with a dev.https://www.gamasutra.com/view/news/350571/Plumbing_the_depths_of_openworld_space_survival_sim_Empyrions_design.php

HWS Connect v5.36.00 | 30.10.2019 Add : Activated the new SV Deathmatch Event with our new HWS Connect Event Manager Add: New feature about death and clicking Fresh start by accident. You get for 30 seconds after you do this a popup to get back where you were. [image]

Just a couple of things I want to comment on.

When it comes to alien cores, I would then think a limit should still be imposed on it’s strength, like say x2 of the top tier core.

Sadly Eleon has already stated that they are going to hard code the limits. Players and server owners can’t adjust the maximum values allowed at all.

The only thing we can do is adjust each individual block and device and give them a new number, so that we can use more or less things. We still have to stay within the maximum allowed values for each CPU tier.
This will not change.

This means we can’t just allow the alien core to give double the max CPU value. Not possible. Alien core has no tier is unlimited and that’s it. We can’t change that at all. If we allow Alien core then it has to be unlimited CPU and we have zero say in the matter.

If CPU is inabled will core limit be increased?

Core limit? As in only legally having a singular core?

core limit per playfield. With the sevear restrictions CPU appears to be placing on late game builds will we have more coes than the 2,2,2,2 currently allowed. So we can have several specility ships / bases to do what 1 or two did before.

this change was just anounced

“- CPU Penalties : Ships with at least one Core admin or NPC core or NPC core admin will no be subject to CPU penalties”

what do you think?

this change was just anounced

“- CPU Penalties : Ships with at least one Core admin or NPC core or NPC core admin will no be subject to CPU penalties”

what do you think?

Yes this was intentional from the start but it wasn’t the case because a bug or oversight.
Alien/Admin/NPC cores are unlimited for POI purposes. This can’t be adjusted by Rex either.

I don’t see how we can possibly allow players to use NPC cores anymore if we decide to use CPU in HWS 11. It’s just too much of an unfair advantage, in my opinion.

I don’t see how we can possibly allow players to use NPC cores anymore if we decide to use CPU in HWS 11. It’s just too much of an unfair advantage, in my opinion.

Would you guys care to elaborate? Just calling it overpowered doesn’t make it so. I don’t see how they would be anymore overpowered than they are now. There are still class and weapon limits/restrictions in place. Alien cores will provide the same benefit they always have, in addition to being able to bypass the cpu tier system and having to place those extra blocks. Plus, they are accessible to everyone. Heck, just like Epic Heavy Armor, HWS even gives you one for free if you know where to look…

Besides, alien cores and CPU are the least of your worries right now. The scariest part of this update is the new flight mechanics. Thats whats gonna break everyone’s blueprints, garage ships included. After testing a couple days in experimental I found that the majority of my BPs were rendered useless due to thruster torque and placement. Either unable to turn at all even with RCS. Or they start flipping around wildly in various directions unable to be controlled. The only ships that were flyable were the ones that had redundant thrusters in every direction throughout the entire hull of the ship. Redundancy that comes at a high CPU cost. Even my least CPU hungry class 1 SV fighter still came in at around triple the max CPU limit for tier 4, after removing all the RCS …thank god for alien cores!
Anyway, worst part is that the way things are looking RIGHT NOW is gonna throw a lot of creative ship shapes into the garbage. If it stays the way things are in EXP. there will be an optimal ship shape and thruster layout that every ship will have to abide by to be competitive in PVP…ill leave it to you to figure out what that is.

TLDR: an alien core is a personal CPU off switch

because everybody else will suffer tremendous down rating of there ship function if they exceed CPU by any non trivial amount. Blocks add verry little to size class but a significant amount to CPU. As i see it with cpu size 3-4 will be all that can be reasonably achived with CPU activated but with an alien core it will be no problem to build to the max size eith all the thrust and gunns allowed with no penilite for going over CPU MAX. It also means with an alien core you would not need to add the CPU extenders to your ship to get to max CPU. Those extenders are expensive in terms of both resources, Energy consumed, and space used. The components to make the CPU extenders must be found in POI or from traders to make the CPU extenders even when spawning from factory, just lIke grow plots.
that is just too much advantage to the alien core still being used. All things are subject to change as expiermental is worked through. So for however the changes in the second release have made it more difficult to use CPU not less.

they are accessible to everyone. Heck, just like Epic Heavy Armor, HWS even gives you one for free if you know where to look…

Not using alien cores is a choice.

A choice based on disposable income is not a choice.

Would you guys care to elaborate? Just calling it overpowered doesn’t make it so. I don’t see how they would be anymore overpowered than they are now. There are still class and weapon limits/restrictions in place. Alien cores will provide the same benefit they always have, in addition to being able to bypass the cpu tier system and having to place those extra blocks.

Sure I can elaborate with an example. I will walk you through a CV in 10.6 currently (keep in mind the numbers will likely change before stable but my point still stands).

I will place a CV starter block and attach 3, just 3, XL thrusters. No blocks, no devices, no cockpit even. Just a core and 3 XL thrusters.
This CV is over the max limit for a CV with max CPU extenders already with just those 4 things. It’s obviously still class size 1 as well.
This is already bigger than a player can build with a player core without massive penalties.

Now if I use a NPC core instead I can keep building that CV up to the max class size restrictions for the server/playfield simply because the CPU restrictions no longer apply to me like they do the rest of the server.

Do you not see the issue with that and how unfair an advantage that is?
That’s a whole other level of not cool. That forces everyone to use alien cores no matter what just to have a chance at competing.
That’s way worse than the difference we have between alien and player cores currently. Way worse.

Yes, Rex can and probably will play with the config to adjust his own CPU values to each device. The maximum per tier is still hardcoded though and he can’t change that.
I just don’t see alien cores possible for players if we use CPU, not without it creating a server wide meta of just using alien cores.

I just don’t see alien cores possible for players if we use CPU, not without it creating a server wide meta of just using alien cores.

How is this different from now? NPC cores ARE part of the current meta. Not having to stop to refuel during battle is a huge bonus. I understand your argument for CPU, but this argument becomes negligible with increased values. And ill repeat again, alien cores are accessible to EVERYONE. Regardless the amount of credits you have. There are multiple missions that provide them as reward.

So when you have one you don’t have to play the survival part of the game in this survival game . Your ships are always filled up with oxy , fuel and warp ready while it stands above CPU rules …sounds like a perfect troll tool to me .