What happened?
=> i was mining ice and there was no enemy ships then a zirak corvete ship was in my ship we were in an x shape and i could not move anywere then a zirak frigete class ship came in and destroyed most all of my ship including all of my cores and all of my storage is gone i can handle the stuff i will get it back no problem didnt spend money on that however i can not get the alien core and advance core back that i spent money on and there is no way the ship would have even damaged my ship i have taken them out time and time again with my ship but i couldnt move or shoot at them if i can just get the cores back i will grind to get the ship back i have help in that way but i was and sill am pretty frustrated

Structure ID(s) (Open ingame console and type di)?
=> i cant get it

How can we help you now?
=> replace what was lost

Structure ID(s) (Open ingame console and type di)?
=> i cant get it

you left important thing out from ticket, like where and when did it happen, and at least name of your ship…i would hope you still know your ships name

Welcome to HWS @Joey_Markle
sorry to hear but this is happening from time to time because of the massive usage of AI CVs in Reforged Eden, combined with the bugs they bring of course.
Normally in such situation we require a video because we have absolutely no trace or history of what happened to you.

i can not get the alien core and advance core back

I checked your backup out nevertheless and I only found an Advanced Core in your ship container.
The Alien Core (you bought?) is installed in the ship itself, which you can get with EGS Recycle.

image1564×653 113 KB
But ok, you have to decide that.
I find it weird that your interior looks also intact but the items from your cargo are missing.
Too many variables to me to be able to just restore the ship but I gave you the Advanced Core back at least.
Joey_Markle October 15, 2021, 1:02pm #5

was left back to base and repaired it took everything

ah I see. In that case we can’t restore any backup in the first place. Only untouched structures can be restored. For the future, what ever happens to your ship, do not touch anything of it. Leave it there, even if it gets blown up to pieces. Do not touch any container either.

The alien core was destroyed

Your CV in the screenshot has an Alien Core (NPC Core) installed. 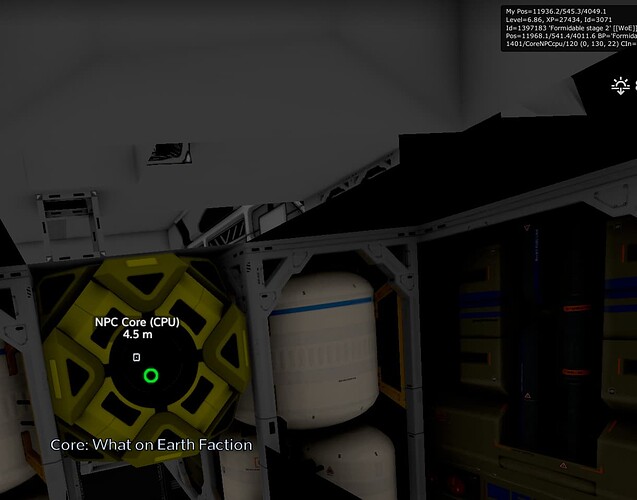 But I see your confusion. Because of the repair bay, you also got a core back as well

You’re welcome for the Advanced Core. Hopefully your next journey will be better.