RED put a very armed base at the exit of the supergate, from black hole to Homeworld, as the classic disgusting campers of every multiplayer.
Even before the playefild appeared to me, my ship was already half destroyed.
I do not know if it is allowed, so I decided to report.

Next time please do NOT post the same question all over the place. It doesn’t make it better.

Even better: check the guide before asking:

So yes, it’s allowed and intentionally that Supergates create a PvP incentive / risk to use.
For that reason there are always at least 2 or more Supergates giving you the opportunity to go back to PvE.

I wrote in 2 sections by mistake, because I did not see the first one, sorry

I express my total disagreement on the matter.
This reminds me of a little EVE Online, and this is absolutely not a compliment! I expect the “warp disruptor” systems too at any moment, so we are fully booked

But ovviously this is just my opinion

We discussed it overall already and you missed it too, no problem.

So I will most likely change it in the next season again, waiting for Eleon implementing EMP weapons and read the complains again, not addressing me that time though

I agree with systems without warp permission, but anti-warp weapons would extend this concept to every system, this is wrong in my opinion… some systems, not all, is better!
But camping remains the worst. One of the most hated things in any kind of game. I think many people will skip this season for this.
even more boring PvP!

The question is… why you dont use normal warp instead of using HW supergate?

Cause I cannot!
Because in some systems you must necessarily use the supergate, is the only way, warp is not allowed, and it’s a good idea, because it prevents users from escaping continuously, this can ruin PvP.
but the camping completely destroys the PvP, because you can only hope to be lucky and not spawn in front of 3 bases that destroy you instantly. This is not a challenge, it’s not a PVP, it’s just a “flip a coin”, If head you will have the privilege to try a fight, if not you just die. We do not build PvP ships to bet them, we build them to fight!

This is why I’m sometimes not amused about Community feedback - too much misinformation or “assumptions”. This can ruin good ideas.

Misconception 1 - you can’t K-warp out of Homeworld System.
You can! Check the Universe Map. 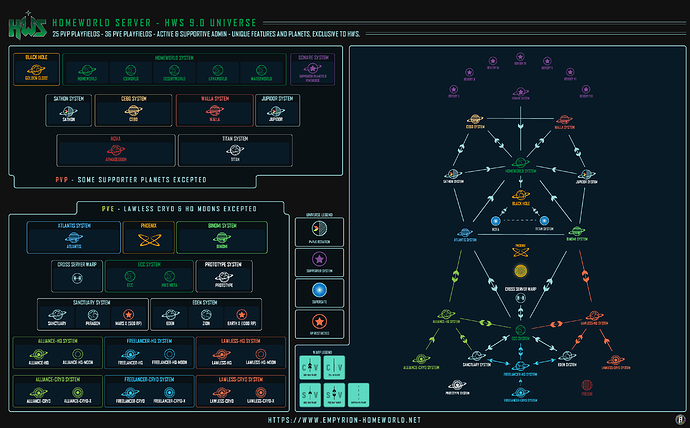 hws-9-universe.png4034×2504 387 KB
Walla und Cebo System are free to K-warp.
And even if you talk about the “PvP Triangle” Black Hole <> Nova <> Titan System, you can always K-warp to get rid of your followers.

This topic will contain a table of contents [HWS-Supergates] To enhance the HWS Universe gameplay we have implemented Supergates. They give you the option to transport from A to B even with your (docked) ship(s). Just keep in mind that ONLY the pilot should use the sg:warp command and not the Passengers! The Supergate Locations Name Command Coordinates Atlantis System sg:warp:at 0, 7000, 0 Atlantis System (Only SV) sg:warp:at-sv 0, -7000, 0 Binomi System sg:warp:bi 0, 7000, 0 …


First you can’t build bases near Supergates, because they are such programmed to shoot at bases but not at ships. And even there you have two versions above and below a planet. The Supergate below a planet only accepts SVs - it will shoot at CVs and BAses.
Smart SV PvP guys can travel like Ninjas throughout the PvP zones.
The only “campers” are active players in their ships, which is part of PvP.
It’s like you complain at Valve about the AWP “campers” in Counter Strike and they one shot you…
But as I said already, I accept we don’t have a competitive PvP community (yet), so I will change it.
Topic solved.
1 Like
Venom January 21, 2019, 6:12pm #9

Man
I have traveled from black hole to Homeworld, and in the exact moment when I appeared in homeworld my CV has been halved in one second by something very big, I have no idea if it was a base or a CV but certainly could not be a SV and not even a assumption.
Camping is considered part of PvP in many games, too many. maybe even for this Eleon does not insert anti-warp weapons, gates or similar, maybe he wants to do something different for once.
Players who like to camp have an IMMENSE repertoire of games…

From Bh triangle can supergate to:

LET ME MINE GOLD FOR FREE PLZ
Or organize with a big alliance and try to defeat the RED.
On NA ABN was owning the entire pvp sectors and after a month Op4 - TAW and other formed a bigger alliance to fight them and got some victories.
Why on EU people just want free resources and dont try to fight them?

Is one month that some people is selling true 3000blocks pvp sv on Ecc for a cheap price… and nobody buyed those.

You want that i will spawn my personal sv, change my name, change my faction and pilot it for you?

I only have PvP projects my friend
Not all players want the same things
I was once also attacked 10 vs 1 and I did not complain, because if I like playing alone I have to accept this (which is very rare in this game anyway)
The only thing that bothers me is when you have no way to react and you just die. This only happens in camping or causes of bugs (and bugs are not a problem on this server because administrators)
Is ONLY this the bother, get destroyed without can react.
But if you have to heat up so much I do not say anything more, do not worry!

A base that shoots you is not considered camping. Camping is an active players that waits for you.
And nobody is camping HW supergate

I hope you’re right
Maybe it’s just a random problem of where the supergate spawn you.
Same iussue when you die and he respawn you in front of the turret that killed you.
Not a real camping
Could be 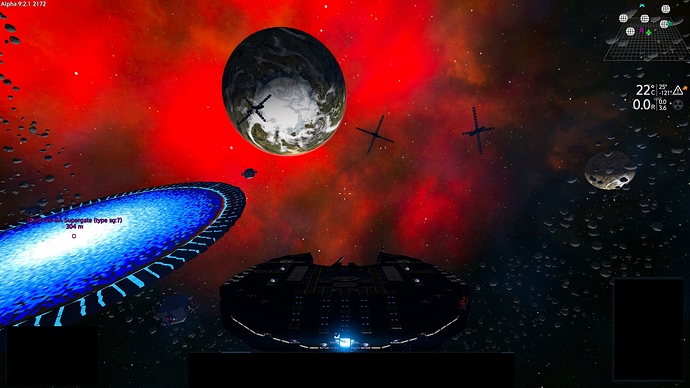 I admit it, you seemed serious, you really convinced me that it was just a misunderstanding and not real camping, hahaha sure!
3 hallucinations here

I was not the only one who talking about this, and you know it:

You don’t need to use Supergates unless you want to go to Black Hole. Warps are safe but inconvenient, Supergates are fast and well placed but include extra risk. If you look at the map the only time you absolutely must use a Supergate in PVP is when you go from Black Hole to Homeworld(Unless I am missing something).

When you go out of black hole to Homeworld, once every three times the supergate spawn you in front of a base, and I do not think there is another reason to build 3 bases in that position. Maybe is not “camping” the right term, but this is not the point.

If you can’t:
Check the HW Gate before going to BH
Take the Risk of an unchecked Gate jump
Fly a ship that can survive 10 seconds of base attack (Honestly this is not hard to build)

Then go to an Intro or Intermediate PVP area, like your faction moon or Jupidor/Sathon. Your trying to simplify end game content because your not at the end game yet. You need to grind your skills if your losing to bases that way. End game rewards should not be free, the planet made of Gold should not be free

Side note: Your complaining about a player PVP structure in Homeworld Space at a location you know. Just go take it out if you don’t like it.