Loss of things after CWS. NA>EU

What happened:
=>
I teleported, but without things.
Player(s) with issue:
=> [LiTeN]

How can we help you now:
=>
Return all that was in the ship = (
I always make a screenshot … finally it helped) 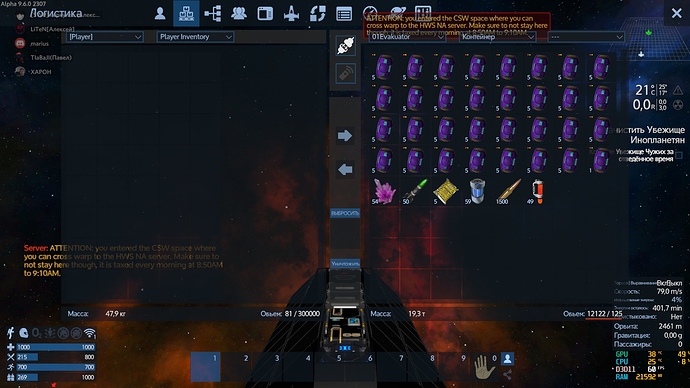 what do you mean?
was your player inventory empty or your ship?
Did the Ship not spawn, or was it just empty compared to what you warped with?

Did you just fill the stuff in right before CSW?

After the jump and teleportation, the ship became completely empty =(
The guys said that this happens sometimes, so when I was transporting something valuable, I always took a screenshot

I really really hope this is a joke here or that you forgot to tell us something.
About CSW Ships empty: I never heard about that problem.

But what I really dislike is this:

Can you explain that please?

I wanted to exchange for RP in NA, but mixed up the containers. I had to take the gray ones.
When I returned from NA to the EU, I was teleported to the ship, everything was in place, I made the jump to the ECC, but I was teleported to CWS again, and the ship was empty.
Some players lost armor, other various trivia. Therefore, no one complained. I have been collecting containers since the beginning of the season.

Last season, ReX checked my drawers several times, and asked where they came from. All honest, I regularly visit PvE PoI and exchange between players. I collect a large number and change it to RP or sell it.

In general, you can always email me at Discord to solve a problem more quickly.

About CSW Ships empty: I never heard about that problem.

For whatever its worth @Jascha, I have been on coms and heard at least 2 times people losing their ship inventory when doing CSW. Seems to be a rare thing but has happened.

Situation is solved.
The ship did not loose any items, but they were taken out after CSW. But before CSW was finished and restored the backpack.