If you could help by playing on the Public Eleon Test Server for a time, testing the trouble we had yesterday on our server, this would be VERY VERY helpfull!

Alpha Experimental 5.0.4: Patch 2 - We need your help in testing multiplayer

Hi Galactic Survivalists, We would need your help in testing the new patch Alpha 5.0.4 on the Experimental Branch because we changed the underlying...

Since this has something to do with network (improvements) it would really help everyone!

damn it im at work for another 8 hrs will I be too late to log in later?

They keep it up for a few days i think. Thanks for helping!

[quote=“RexXxuS, post:4, topic:3447”]
Try to do the PDA missions there (soon you get another reward playing there)
[/quote]We get a reward on HWS for running PDA missions on experimental?

I completed a mission. Took a while before I got reward but got it. Seems to be working. But this is just a non-customized server… No custom POI or anything I think. The missions probably bug on HWS though. 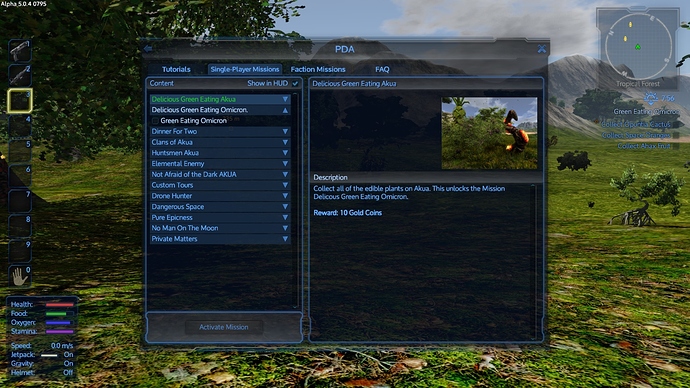 POI’s are mostly cored and raided. And it’s survival not creative so it’s kind of a pain to test anything.

what was the reward? oh 10 gold coins

Once I did this I couldn’t load any games, singleplayer, multiplayer, now reinstalling.

Try deleting cache. And don’t open/use old savegames (don’t even look at them as that can sometimes already cause a crash) while in experimental. Best also to avoid blueprints I guess.

But I was hoping for a creative test server for testing missions so we don’t have to grind pentax, level, resources, etc.

You get it all wrong.

It is not right now about instant rewards or transferable rewards. It is so we can see you help with it and doing soon our own Test server for Eleon with all features HWS has + special tester bonus like instant OCD lvl 7 etc. This also means your progress on that server are saved and nothing wasted again.

All brand new features can this way be likely enjoyed.

If you don’t like the bug report on official forums please report here back if you experienced any problems etc. on this server for now. We forward it to the devs then.

That would be nice. Because on their server testing is really slow and painful + missing the HWS universe that we kinda need for testing missions and such.

This topic is no longer a banner. It will no longer appear at the top of every page.

Im in I need this. Just tell me when and where.

For the test server only of course…