What happened:
=> OAM is fueled but not working. AM:INFO shows dates back to 2017 (yeah, I haven’t used it in years)

How can we help you now:
=> Set correct expiry dates or whatever makes them work 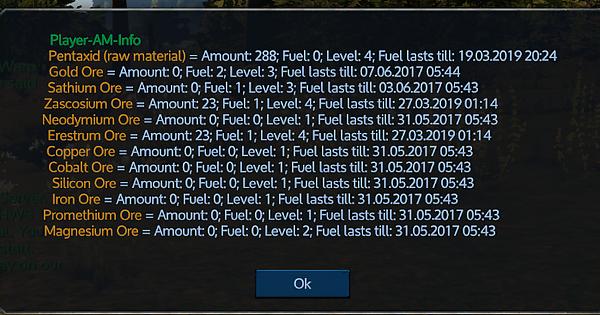 On wipe the oam fuel wipes allso, from the pick i can see that you have fueled (on this season) Gold, Sathium, Zascosium and Erestrum. If you fueled them all last season you lost all the fuel that they got when the server wiped.

I upgraded and fueled Sathium this season and still has a date of 2017.
The problem seems to be that when I upgrade the miner it got 1 fuel for free, but the date of expiry was not updated.
/Edit. well idk what was the problem, maybe just server overload. Now the Sathium fuel wsa finally consumed and it’s working.

Each autominer needs at least fuel of the amount of the level.
So Gold for example is level 3 and you only have 2 fuel in. Just put one more fuel in Gold and it works. Same for the others.

OK well that is 2 very important facts/answers i see in this post that do not exist in the hws domain.

I never saw anything explaining these facts, these are the kind of facts that need to be added to the connect page for OAM asap imho.
Or at least better explained.
I actually used my oam to store my am cores in the form of fuel

would not have done so if I knew they vanish after wipe.

Are you sure about this Jascha?

This has never been how it worked for me, each OAM takes 1 Fuel regardless of level unless this has changed?

All i know is, even at later levels, I have only ever used 1 OAM Core per and all have ran for me just fine.

This changed a year ago or so when we totally reworked the autominer.

that’s weird then, because I’ve fueled lvl 10 autominers with a single core last season and its worked absolutely 100%

I know this because i deliberately only held the correct of autominer cores in by backpack while doing the fuel process.

I will test this when i get home from work

This changed a year ago or so when we totally reworked the autominer.

You mean when it was switched from drill charges as fuel to autominer cores?
If you mean it has been this way since then, no it hasn’t. If it was changed that a level 10 needs a minimum of 10 cores to function, then it was changed very recently. It did not behave that way before.

This is how it functioned very recently,

That is in the Guide for long.

What will not be transferred

sorry bud clearly i miss this info, I forget that extra info relating to these items are out there in the form of forum posts also, just a little hard to track down.

I even went into the guide a little earlier along with the OAM manager before posting but I had not long woke up lol only one hemisphere of this brain functions that early in the day >.<

Though if OAM fuel always wipes, it might be helpful to have that mention on the oam manager for future players to be informed, else there will be people asking again next season who never found the correct information.

This was a good thread because it has set some facts straight at least.
Looks strange when we all on one team giving different answers.

So for the record:
Do we need to fuel OAM with the same amount of cores as its level for minimum usage as jascha said ?

Or is it the case that we can fuel the oam with single cores regardless of level ?

unless someone answers sooner I will test when I get home from work. but as far as I know it is still 1 core per 3 days

even in the original pictures above you can see a level 4 auto miner going with 1 fuel in it still and is showing its fuel as running out in 5 days, so it is sort of already answered, now it is just a case of @RexXxuS and @Jascha deciding what is actually intentional so that it can be corrected…

Sorry my bad… missed the checkbox xD
So you are right: All level cost only 1 core to fuel.

Ok guys thank you all for the useful replies.
Then the gold AM case still goes unexplained. Maybe I just was a little impatient, and I think that the CB: values, the HWS connect page and the jobs that do the mining might not be in sync (mostly because there must be some d.o.s. protection against reloading the page) and that might get you inconsistent values specially when you are ugrading cores and loading fuel.