Got some simming started for u boiz, should you wish to participate.

As the name “Rescue Service” (RSS) implies, my one man guild is supposed to be doing some sort of humanitarian stuff to help everyone. last year it got tied down retaliating against pirates and superpowers… this year it got tied down getting materials in place and learning the new geography. But on may 18
it was finally able to set up its first humanitairian aid station, for ALL of you.

The station is not much to look at yet: just a pair of SV’s set to “public” and loaded up with a token amount of supplies. It’s located at:

Homeworld System Waterworld
-1900 x +1200, near the south pole.
I set up right next to the Crashed Titan (mid)…which is already a relatively lucrative and safe spot by HS standards. If the ships disappear when the POI wipes, I guess I will rebuild them a little further away from it.

Even if you don’t need the supplies, this gesture still potentially affects you. If you wish to help the operation, you can drop by and take/leave goodies. If you want to blockade it and help keep Homeworld system in a more violent/distopian state, you can do that too.

My own rules of engagement would be friendliness toward all by default, tolerating any act committed against the aid station itself. That’s what it is there for. Taking all the goods or even blowing up the public ships is something you are welcome to do. The default also would be to avoid involvement in disputes between other players using the station. Obviously I’d try to retaliate if someone were to intentionally kill me or seize any of my non public assets; this would not be a source of anger or malice but would probably interrupt the aid deliveries. Bases or ships placed in a way that prevents public access to the supplies…would also be considered acts of war against the Rescue Service. But until someone starts a conflict with me along these lines, I should be able to maintain and grow this supply cache on your behalf.

Where will this “game within the game” go? Will it be possible to increase the level of civilization and the availability of goods in this harsh and violent system? Will it evolve into a local trading hub and expand with many people participating? Or will the very presence of an aid station become unsustainable as others blockade it or force me into retaliatory ops?

Drop by waterworld and help write the script for this story yourself! 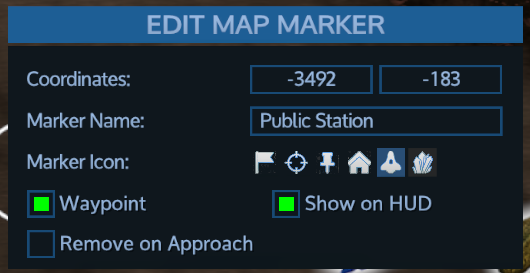 Setup for those stranded on Desertworld.

Yayyy thanks Bob and sorry for the slow response. Sometimes i go a while without logging in to the forum. I dropped by your desertworld base yesterday to try and add (and subtract) some goodies but I could not find the cargo box and had an issue when i tried to add one. I was thinking of putting one in a more obvious location on the base. A wider variety of goods might help too.

I have resupplied what remained of the public aid station detailed above near the north pole on water world. After about 10 days since last visit The main resupply SV was gone but the flyable SV was still there undamaged inside the Crashed Titan Mid, I just put stuff in the SV’s cargo box. not much stuff but a pretty wide variety. also hat tip to roxo and notOP who both apparently visited and either refused to attack the Bob desert base or refused to attack ME while I was at the base.

This decision, at least the decision not to fire on me, freed me up to continue attempts at helping everyone as opposed to getting distracted by a war of retaliation. as indicated earlier, it would not be an act of war to attack the public resupply stations i am setting up …they’re kind of yours to do with as you think best. But things may get more complicated if bob’s public station gets attacked, i don’t know how he would react to that.

So far the public reaction has been friendly toward these public aid stations and those building them it appears…we’ll see how long that lasts and what happens when the honeymoon ends.

i will simply rebuild like the folks living in Tornado Alley