PKA (Guardians) are working with Pirates

The Frog Intelligence Agency found that PKA (guardians) have agreements with pirates when they need it an call them to help. Traders and guardians should know about it, so we declassified the information today. 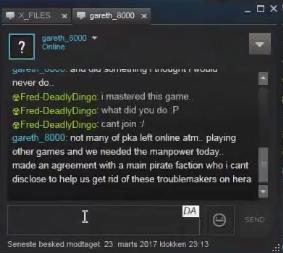 So? Was it hiring pirates to help guardian?

They can’t be frands?

OMG SHAME SHAME SHAME. nonono must be CNN or NBC fake news. Im not beleaving that Pirates would do that! Its true! You know ? PKA first!

Thanks for telling us the name of your spy alt Sir Fred-DeadlyDingo, also its against rules to change that spy alts name now after this

Good Morning, this is U-P-Bart Fake News with a quick wrap up of the latest White House PKA press conference (of course no other media were admitted to it, don’t ask) - on those horrid accusations:

First the Director of Frog Intelligence Services repeated his accusations:

“An ‘extremely credible source’ has called my err our office and told me that Barack Obama’s errr PKA s birth certificate is a fraud” “They are Pirates, not Guardians”

PKA’s answer (really it’s the truth, the only truth and by the way it’s also the greatest truth that is there):

“Any negative polls are fake news, just like the CNN, ABC, NBC polls in the election. Sorry, people want border security for HERA and extreme vetting.”

“We (PKA) will build a great wall – and nobody builds walls better than us, believe us – and we’ll build them very inexpensively. We will use Pirates to build a wall around Hera, very inexpensive, lol those dumb pirates will even fight for us, after all we did to them, rofl.

“We will build a great, great wall on our southern border (HERA) , and I will make Pirates pay for that wall. Mark my words.”

They’re rapists err o I mean _“raidists”… And some, I assume, are good people, like FDM ”

So in summary, PKA’s official statement to those accusation was:
“You know, it really doesn’t matter what the media write as long as you’ve got a young, and beautiful, piece of ass.”

This is U-P Bart News, stay tuned for more. Thanks for watching

god ppl like to read so much into it…

EldSentinel, i love it mate

i have many allies

credits can make many friends. even gurdians

i have many allies

credits can make many friends.

Ahh the life of a busy trader - I am with you! Credits buys a lot of things, even friends for us lonelies.