Just thought I’d say a few things about the new universe. First of all great job on getting it all done and I am far from exploring it widely. Space is a lot more dangerous with people getting shot down even in HQ sector in SVs and CVs by space POIs and clusters popping about in places they weren’t last season.

Cave Mission
Nice to have to fly to a new planet and with new POIs and while the cave ship is far less of a reward than last time it now makes clear sense why you need it. But there are a few issues with the quest progression:
The part where you find the four worms has messages popping up telling you to use the teleporter but in fact you do not need to even enter one of the new pois just fly over them. Since I couldn’t get the teleporter doors open I was quite happy with this but do not think it is what was intended. Also the phoenix supergate part of the quest is weirdly sequenced. That is you get it after you have already opened the trapdoor, already flicked all switches and have left that cave. Only after the worms mission do you see the quest and then have to fly to orbit, fly straight back down and reflick all the switches again. While I knew what was what from last season a new player would not know what the screens showed the first time, and may not think to fly back and reset all switches again. I would suggest finding the phoenix coordinates be earlier in the sequence and then travelling to Phoenix as after the worms.

RP
Are much rarer. There used to be loads of POI on freelancerHQ planet POIs now there are none. I have flown to distant space POIs, also none. In fact from anPOI loot in PVE perspective Binomi is the first and last place to visit. Presumably homeworks planets as well not checked. Not sure if the massive reduction in RP elsewhere is by design but it does make a lot of POIs redundant. I flew 12k or so from planet and found a smugglers stash with some electronics steel plate etc.

Nice new planet. Difficult and sometimes surprising POIs that look completely unique. Amusingly dangerous planet to fly over. Terrain well designed to make taking down the projectile towersnof the Harvester swarm possible. However the loot is extremely poor. Grey loot container and some sprouts. No RP containersand overall probably fewer resources gained than expended in pentaxid for shield, ammo and repairs to my poor SV. The towers look cool, are challenging but the reward for a long battle was far less than taking out a relatively defenceless POI on freelancer HQ. Minor loot container and sprouts. The nexuses are also very cool, some nasty surprises and the prisoner concept is very cool indeed. Again though loot is extremely poor (more resources from farming the desert golems than containers) and the prisoners are sort of pointless beyond roleplaying value. I’m not going to take down a POI just to sell one mingun at the same price I get in flying city or a Racom. They are a unuqie concept so a unique reward would be good

My opinion, which matches what I have seen others comment on discord, is that it is a great place to visit but ATM there is no reason to return. I never figured how to get into the obelisks though so maybe there is something in them. This is a Shame considering how much time and effort has been spent on them.

Thanks for the constructive feedback!

That is @Ju territory. Have to test it myself

RP
Are much rarer.

I did not intentionally make RP rarer but it can be that some POI were replaced by new ones, not “HWS-modified” yet.
Be sure that dedicated RP Missions are coming soon.

Especially because of them. Protoz is a new race/faction in HWS, which will play a bigger role in the HWS Universe. But to make it quick: they are Pirates of EGS, of HWS Reputation Points.
In the first phase I wanted to place them and look how the feedback is. Time was missing to convert all of them into HWS POIs. What I mean with that is to place an Admin core in it and damage everything what should be destroyable by players by 1%. Very time consuming.
Only Admin Cores will store the loot I place in containers. Since Alien Containers are not in the loot table (yet), I will do convert them now step by step.
So sorry for this first disappointment but make sure to come back to Protoz the next days, to go for a special loot hunt

With the restart you will find Alien Container in yellow Alien Container.
A first experiment with the loot table we got now! The Chances are low but even regular standard POIs are suddently crucial

issues with the quest progression

Thank you for this feedback! You are right, this can be done better and more logical. I am going to adjust and make this part more smooth while this season! Thanks for playing and reporting

So noticed the Protoz missions and went back to give them another kicking. The rep bonus is very nice (especially for Freelancer as Atlantis is no longer the wasy way to get Zirax rep up) and the loot seems to be better for the harvester things. Not done the nexus again. Certainly more promising and still a fun challenge. Part way through the mission summoned a bunch of Zirax drones on my go, not sure why.

One of the early Polaris missions requires using a trader to sell ingots. I believe all trading stations have been removed though so it can’t be completed. Visiting the Racom NPC traders had no effect.

After my misadventure the other day, I spent a day getting Zirax rep to neutral just in case and started Erestrum mission on Cor Pol Racom. Triggered fine. Had to warp out and back to Cor- triggered fine. Finding Racom- triggered fine. Prepare yourself at portal- did not trigger at all. Tried relogging, waiting for 5-10 minutes, moving forth and back, not joy. Went to the other Cor one just in case- still didn’t trigger. Erestrum one not quite working.

Liant freighter heist (Neodymium). Triggers mission start fine. Then requires you ro go to Liant- didn’t work. In fact I had to warp to Cor in order for the “Fly to Liant” to trigger. Then I warped back to Liant for the “find the racom” part. All worked fine after that, just "fly to Liant trigger needs fixing. Didnt get a reward but I think thats because I was an idiot with completely full backpack.

Gold freighter mission- I am 99% sure there is no HWS Planet Racom, been up and down the planet with an SV and even on motorbike, nary a Racom to be found…

Not got around the testing the others (or, as with Atlantis, haven’t found the Racom).

Found a reasearch ship where you can sell holo screens (don’t exist as an item in backpack) and another trader who wants spheres (maybe something I haven’t found).

No, I fixed this already. You have to talk to the Polaris Audience in ECC Sector Racom.

Prepare yourself at portal- did not trigger at all. Tried relogging, waiting for 5-10 minutes

Gold freighter mission- I am 99% sure there is no HWS Planet Racom, been up and down the planet with an SV and even on motorbike, nary a Racom to be found…

Found a reasearch ship where you can sell holo screens (don’t exist as an item in backpack) and another trader who wants spheres (maybe something I haven’t found).

This is the Project Eden way of Commodity Trading. On HWS it’s the Zirax Weapons etc.
Have to merge everything together asap.

Thanks for the reply Rex, but you should be off enjoying your birthday

One of the early Polaris missions requires using a trader to sell ingots. I believe all trading stations have been removed though so it can’t be completed

Just open trading menu from the tab menu. Worked for me

Figured out the problem with Erestrum freigher mission. The point for “getting ready” at the warpgate is actually next to one of the hangar doors so if you go there you can then trigger the pda log and then go through the gate and complete the mission.

Perhaps the Racom was rotated or moved and the co-ordinates for the gate are therfore slightly off.

It seems the playfields have been updated in some way.
The Erestrum freighter mission teleports you to the wrong Racom again (to Sathiium portal in Zirax HWS Racom)

There also appears to eb some stacking (I assume inadvertent) of patrol vessels and their ilk in Cor, 4 ships I believe: 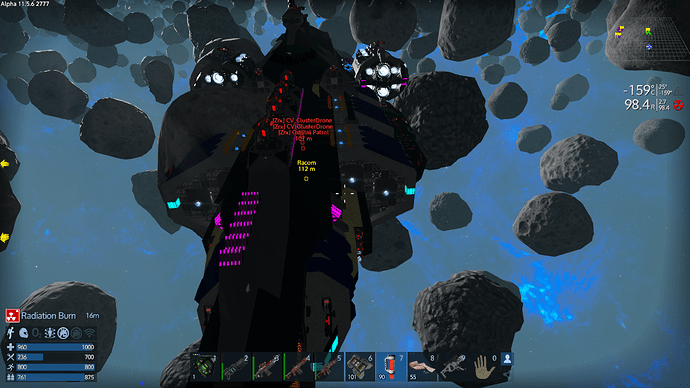 Theres a lot more going on in open space with different drones and stuff all about which is nice. All of them seem to turn to passable when you enter them so you can godmode through them. Again, this may be deliberate.