I live 20 miles from a populated city, storm hits the night before… ship and shuttle was parked right above EGS homeworld… couldnt get back online till just now, see I am taxed to the max… Some of which I cant even account for, 20 million in taxes.

I understand the point of taxing! so people dont park and camp out. But sometimes that is not the case! I have 2200 hours into this game, should people like me be forced off the server and have to play somewhere else? Should we have to mine gold for hundreds of hours to pay off a debt that was out of our control? should I have to buy credits with actual cash when I have already helped support the server?

The real question is, how helpful are taxes to players? 20,000,000 negative right now for me? because the power went out? this is very disheartening and to be entirely honest… if there was way to downvote the server for issues, I would downvote for the absolute nightmare the tax system is. I am pretty sure there has been almost NO ONE online lately, 170 or so available to play at once and the most I ever see now days is less then 10. but if I want to stay a part of this, I am now liable for many hours of my life not even enjoying what you have made here, I am now just paying because somewhere in my home town the ISP went out for about 27 hours.

I think the Tax rules should change. I think that if they reflected how many people were actually using the server at the time of the transgression I would have probably been fined a lot less. I also think there should be an appeal button to help players like me who have legit issues and just want to enjoy your game and were definetly not parking or camping in a tax zone, but rather were stuck.

Thanks for giving me this space to voice my concern.
Arieous / Entity Id: 9043620

What happened?
=> my ISP was shut off when I was in a taxed area and I am totally in debt now

On which Playfield?
=> EGS homeworld

How can we help you now?
=> I was not ignoring the rules, my service provider was down. No internet and I was stuck in a taxed area. I would like to appeal my tax charges for two sets of violations where I was charged twice because it was not an in game violation, it was only on account of being unable to get online.

The tax system really isn’t that strict, and most of the time if you just ask nicely (in a ticket like yours here), the admins will refund your tax.

Not very helpful, but I think a rework of the tax system is already in progress. But the fear of being taxed 20 million is enough to keep most players aware of taxes

=> I was not ignoring the rules, my service provider was down. No internet and I was stuck in a taxed area. I would like to appeal my tax charges for two sets of violations where I was charged twice because it was not an in-game violation, it was only on account of being unable to get online.

I know it can be frustrating to lose a lot of money, but a bad mood spreads. Saying things a bit nicer will get you quite far.

On point @Dr.Dark
I was just wondering why you didn’t move your ships out of the taxed playfield, even though you could. At least the logs say you traveled around the universe nevertheless. 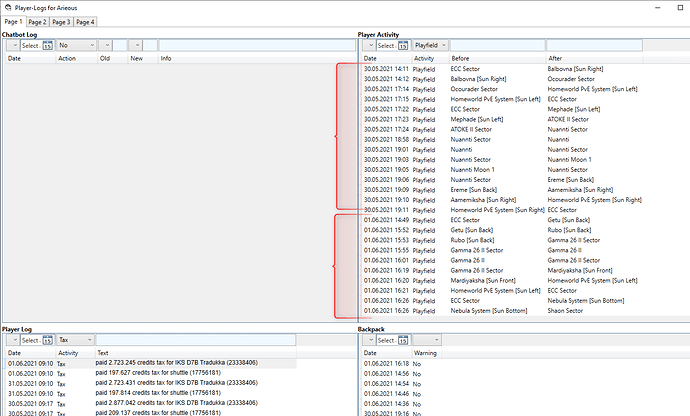 You left your ships frequently in ECC Sector before already, so the Debt just added up.
(April-May)

I cleared all taxes here cause yeah, not many are playing and waiting for HWS+. So it does not make much sense in that regard.
It’s even a good idea to include player count activity into the tax formula.
Cause in the end we don’t have this feature cause we are masochists, it’s because busy playfields should feel less laggy, so everyone can enjoy their time here.

For HWS+ we will rework the Taxes for sure