Yesterday evening, according to the logs around 22u24, TFT players attacked, raided a private Trader base in space.

A clear violation of the server Faction rules. 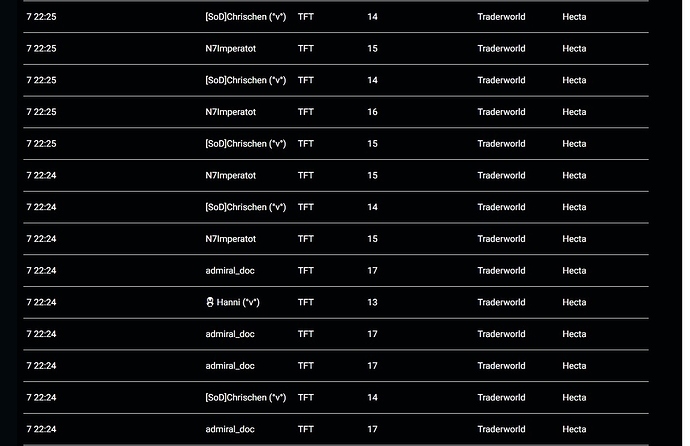 This is a chance for these players to explain, I suggest they take it.

raided a private Trader base in space

The ships around it, incl the Hecta where indeed Faction Trader ships, so…the fact that they raided the base where the ships were next to is for them a bonus…no

NO this is clearly an attack on a trader.

Builds base in pvp space , sets it to private then complains when people attack it , hummm seems about about right.

Agree there is always the risk, it’s in PVP space. that is to be expected…fair enough. But blasting the trader ships (hecta is a ART faction ship) to bits is not oke…as it was a trader faction doing the attack? or are the rules not clear enough?

Rikus if ship ( hecta ) was shooting. In the way of this ( private ) base then I could see this happening.

Atm it is really hard to see faction tags when you are at range shooting things. I mean you almost have to suicide your ship in order to get anywhere near a base / ship to see a tag. Even then if a ship / base shoots at you no matter the tag you have a right to shoot back. Defend yourself ( grey area )

I know it is not the best thing atm but till we get something better this is what we have to work with . I think the Dev’s are working on a Ally type thing so maybe we can all just play smart and try and do the best we can with what we have. It’s not perfect we all know this.

Lol, I c where this is going. It’s ok. But that gives me carte blanche to reverse it no? And when that happens I will be defending myself…

No it’s not perfect and an ally recognition thing would be a great addition to the game.

By this excuse, it would mean we have the right to continue an attack on ANY base or CV simply because their turrets fired on us. It is not quite the case. The turrets fire on you, you go and counter-attack and at some point you see the tags. Hecta being set to faction would have been pretty visible at some point, yet the guys continued their attack to complete destruction. That is not quite acceptable by the server rules. I know a fake Trader Factions which like abusing this lack of enforcement of the rule.

The best faction to kill traders is being a trader like mentioned in another topic. Not only because they have the best pvp-faction-perks or the best camouflage but also because you can dock on their planet which makes it waaay easier to kill traders.

It is completely legit to kill other traders as a trader on this server. So it makes sense to pick trader if you’d like to pirate and don’t care about roleplaying.

But I believe it is being worked on.

Yep … totally true SE. Just another abuse of the lack of true enforcement of this rule.

Wonder how all this would have played out if this base was not set as Private.

If u read rules, and forum - u should know that Traders COULD fight for resources/drop/trophies vs other Traders. Thats not war, as it in global meaning, thats fight for resources. And if u look on this situation from other side, u will see: Free BA for looting/destroying and some competitors near it. Your actions? As for me - I try to get. So they did it.

You can get out and scope in with a sniper rifle, the cursor shows the ship name at extreme range.
fyi.

But seriously. Dont ever do private in HWS. just dont.

You can get out and scope in with a sniper rifle

And die in a sec, if that gonna be some Pirate xD Epic idea))))

The faction guidelines are not actionable things like the no warp camping rule for instance. If someone is not playing the role, get someone who is to kill them (i.e hire a bounty hunter. There are plenty who actually do play their role)

Then I simply can go around and kill every Trader in sight … and good luck punishing me.
Considering how many Fake Traders I have to kill for attacking us, I would love to see an ADMIN state that they will not interfere should we decide to do that. Let Hunters or Alliance be the ones to act on these breaches and Admin would do nothing … Please would an Admin confirm that this is the way they want it to roll.

I would love to see an ADMIN state that they will not interfere should we decide to do that.

As it was already said (over 100500 times) - while devs wouldnt make better logs, with something like "Player X kill Player Y"© - There is nothing Adm could do.

Like ive mentioned, change is coming. If you want to be a Trader killer, and you are a Trader, That is fine. They are server laws, not server rules. So you cannot get banned for doing so.

Lets just say soon, If thats the way you want to play, you will have to bear the consequences…and there WILL be some.

A little patience, this kind of stuff will get cut down…i assure you

Give us a little time and all will be reviled