⚠ A hidden in-game feature you must know about

recent events force me to make this public and transparent to all of you. It is kind of a new situation in the last 4,5 years I’m running HWS but unfortunately a very difficult one - I needed days to think about it and it’s not over yet.

Quick info before: Alpha 12 had the intention to push PvP a bit more. Unfortunately the Database ruined it first, but one feature got added nevertheless and I don’t even know, if everyone knows about it!? The Copy Paste clone of our Proximity Log from HWS Connect: 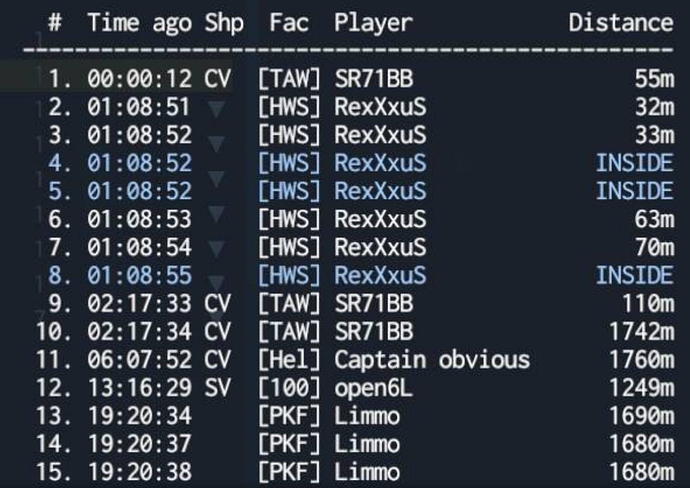 You open your Registry, click on one of your structures and can globally track who was near it, just like HWS Connect but in game.

image1472×190 29.2 KB
But that was just one part of the whole “PvP Feature”. Originally you could also track Playfield Logs when certain things are fulfilled.
Time was running out for Alpha 12 though and this feature didn’t make it with all the specifications in game. I think it was just shortly available once in one of the A12 EXP versions.

However… with a specific combination of clicks, a glitch allowed you to access this information nevertheless! 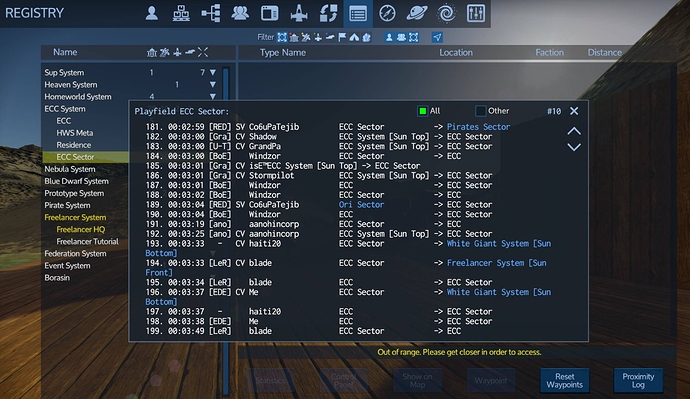 The Playfield Proximity Log reveals all “transactions” of players IN and OUT of a specific playfield as you can see above. This is from ECC Sector on HWS EU. I think from the last 3 days.
The only thing you need to have is a structure in the specific playfield and now the right order of clicks:

That’s it. A very powerful feature, for PvP even more powerful. Basically a combination of our HWS Proximity Log and the Global Scan.
Combined with the overpowered high range of Detectors it is basically THE Pirate Hunt tool out there.
Now, I don’t know what Eleon will do with this Playfield Proximity Log feature. I have let them know but either they will remove it or make it available to all without a glitch. We will see.
Because I can’t disable it at all, I think it is only fair if everyone knows about it as long as it is around.
Be sure though that this topic about Detectors, Global Scan and overall PvP visibility will be drastically adjusted in HWS 14 as good as I can.
It isn’t necessary bad for PvP to always know where your enemies are, you know what you get then, but there should be more varieties for Ninjas or Stealth Operations in general as well. Hence lowering the Detector range in PvP and other things should help with that.

The Playfield Proximity Log on the other hand will for sure change either way too. Maybe attached to a device, maybe only available for bases or I don’t know.

Why do I share this big feature so late!?

Now we are coming to the bad part. I didn’t know about this at all! I wonder how many of you knew about it and not told me?
Is this “in-game feature” now a glitch or exploit or what?
Or different put: the player who used this, in PvP against his enemies for advantage, abused a not visible (=not intended) feature for the mass is fair?

Unfortunately Saul Guud from ABN/SMC did this for I don’t know how long and who else he told this to. I would need to crawl the logs for days now, to see who “magically know” the locations of other players and followed them then.
All I know is that this was highly unfair information others didn’t know and felt cheated that they always got found. I know from many players who sent me PMs “They always know where I am!, how the hell they know it!?” Of course rumors got established about HWS Connect global scan hacks, Infiltration, Warp camping decoys, etc. etc.
I want a fair server and not mentioning such crucial “feature” to me is not right.

Some will argue strongly now “BUT THIS IS AN IN-GAME FEATURE! Full RELEASE bro. I didn’t know others didn’t know annnd… I’m innocent!”
Or the common excuse that “what ever is given by the Developers is ‘work as intended’ and legit to use”.

This is nonsense logic. And a poor attempt to avoid responsibility.
If you need a glitch to access a feature, you might remember from our rules this:

Definition: A Bug or Exploit, for the purposes of HWS Rules, is defined as “Any mechanic, whether executed in or out of game, which creates a condition that was not an intended functionality of the game OR HWS Server features.”

And if you even further argue about not knowing what is “intended” or not in this alpha full release game, especially if you know and think "oh, that is quite imbalanced" then ask me right away.
Ignorance does NOT protect you from consequences in any case!

So, it is overall very unfortunate and I still have to think about all consequences from this incident.
At least we know it now and I am at least thankful that Saul Guud told me in the end about this glitch in detail. This was the reason for his initial couple day ban and for telling me this big thing, the reason I unbanned him again. If I imagine this feature would have been kept abused in the secret I consider the unban as legit reward but second final chance.

The overall damage that was done, what punishment lies ahead, have to be still investigated in more detail though and requires more time for me

I hope everyone is now properly clarified about everything and the message is out: please play fair! Everyone is interested in fair play, no!? If you aren’t, you will get sorted out from HWS, sooner or later, trust me.