After completing The EGS Organization on RE, I did not receive rep and credits

When did it happen? (Use server time: type ingame cb:time)
=> approximately 17:45

On which Playfield?
=> UCHN Discovery

How can we help you now?
=> I would like to receive the amount of reputation for the EGS faction provided as a reward for the mission.

Did you check your HWS Connect Dashboard to be sure you did not receive anything? You will get no notice about it that I remember in game but I did get it. Going straight to it also should not matter but you have to have that mission active when you get to each step. Most times I multi task doing many missions at a time like combining this one with the Dead Planet one.
Also make sure the newpapers are in your inventory when you get to the Discovery to end the mission.

This mission cannot be activated by yourself through the PDA. The mission is activated automatically, upon contact with an NPC in the ECC, through a dialogue with him. Without newspapers in your inventory, you cannot reactivate the mission. The newspapers were in my inventory at the end of the mission. They were not deleted when I received the delivery completion mark, when I visited another UCH ship during the initial activation of the mission. With the complete completion of the mission and the corresponding mark in the PDA, the newspapers were also not removed from the inventory by the game. No award has been received. Without this reputation, I and members of my faction cannot use teleports in ECC

newspapers were also not removed from the inventory

the mission requirement is to drop the papers on the ground for it to trigger.

this is to be done at the specific UCH Discovery in the alpha starter system, not any other UCH vessels.

They did auto drop for me and ONLY when I had the mission activated from the time I spoke to the blond on the ECC planet. I can only speak to how I did it not anything else. If I did it this way stands to reason that is how others can/should do it. 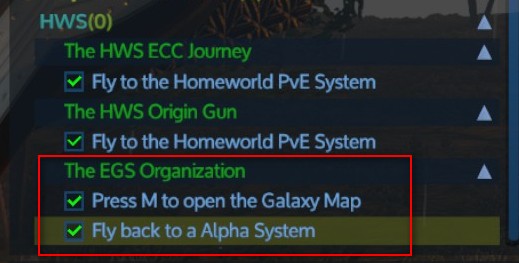 I will repeat it again. The bottom line is that the mission is complete. But I didn’t receive the award.

I had another look at the screenshot you posted earlier and seen what I missed. You are looking for HWS REP used in the market and what not. That is NOT the kind of rep you get for that. Look in the People/Faction tab you are now friendly with ECC faction that is the rep you get from doing that mission with the 1 million credits. Sorry I miss that as I think others may have too. Though I was trying to help while doing other things.

Two things to keep in mind, first Rexxus lives in EU so he is in bed right now. That said posting in Discord will not get a faster response.
Also if he was going to respond to Discord he would do away with the ticket system. In the past staff has said there is nothing they can do with the buggy PDA mission system, it is likely they are not responding because all the responses you would get from them you got already from us. 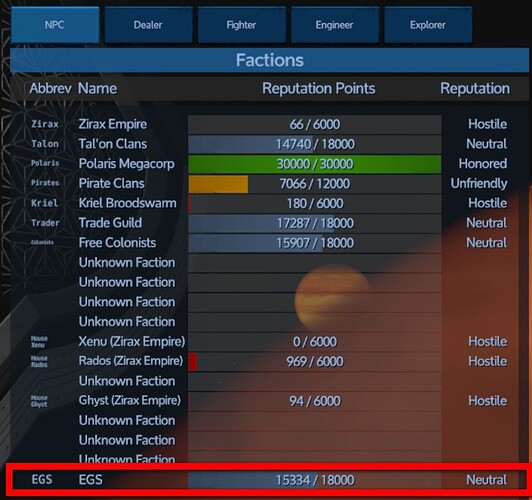 20211011040806_1806×757 111 KB
Do not misunderstand me. Perhaps my question was originally worded incorrectly. Perhaps the problem is that I use google translate.
However, I have already completed this mission before the wipe. I have already completed all three HWS missions before the wipe. I read the descriptions of the missions and know where to take the newspapers and what reward I should receive.

The reward for this mission, namely the reputation with the EGS faction, I never received. In addition, I have not received a million credits.

I am sure that if the reputation can be bought at - All NPC Factions Honored - then there is a way to give me the reputation with the EGS faction, which I was entitled to as a mission reward, but which I did not receive. Credits interest me to a lesser extent. I need to be able to use ECC teleport. And now it is not possible and there is no way to replay the mission from the very beginning. To receive an award.

In the end, I still hope to get an answer from the administrator, and not just advice on what to do.

you will get a answer from admins when they awake…
this is not a solution, but in meantime, given that faction shares NPC reputation, you could also have one of your faction members do the quest so you can get the reputation points and use the TP

Other players in my faction do not have this option yet. But yes, I know about it. This is my last hope if this ticket never gets a proper solution.

Hi,
the master question is only that:
After you were ~150 meter near the UCH Discovery Ship, did you get a Dialogue message which told you “Collect Reward”?

Only if you clicked on that Dialog option, you would get the credits and RP. The PDA is just a direction / story helper.
I think you completed the Mission and pressed ESC to get rid of those popup stuff, right?

Luckily there is @q0 now

I added it to that one but have to add it to many more.
Players can’t ESC then anymore.

That’s a great workaround for now Rex.
I wish the devs would solve this on their side eventually though, it’s a really bad system to begin with.

It would have been better if the devs had made it so we have to manually collect the rewards, when we are ready to, in the PDA menu instead of having them randomly pop-up.

A queue system for rewards like in… ehm… Splitgate actually. Yes, that would be nice!
One day, probably…

dialogue and PDA. 2 incomplete systems fighting each other

Hi.
It may be difficult to understand me, I do not speak English, I use google translator. I think my text is a little broken because of this.

I will try again in order to explain what happened. I still hope that the administration will go to meet me, give me the reputation with the EGS faction that I am entitled to.

I already completed the quest The EGS Organization in Season 1.5 RE, successfully and without problems. Then, taking the task, I immediately flew to the Alpha system, without turning anywhere. I flew to the UCH Discovery sector and when I approached the UCHN Discovery ship, the quest was completely completed immediately, and I received a reward.

In this 1.6 RE season, having taken on a mission, I did not fly directly to the Alpha system. On the way back, I visited several sectors in different systems. In the mission description - The EGS Organization - there are no restrictions on this.
One of the systems had a UCH sector. I decided to fly there. To open access there. Through the teleport. For the future.
When I approached the UCH ship, the second part of the mission, namely the delivery of newspapers, was automatically completed.
Of the two tasks, according to the mission, I have only one active left, to get to the Alpha system.
The newspapers were in my inventory and they remained there after completing the second stage of the mission.

Now I don’t remember exactly, but most likely further on the way to the Alpha system, I visited another UCHN ship, but this time to receive points for the mission - Project Eden Research.
I selected the Project Eden Research mission, but the delivery mission was canceled.
Only when I tried to activate the mission again, I found out that it cannot be activated from the menu. Not sure for sure, I postponed trying to return to the NPC in ECC for a more convenient time.

Later I got into ECC. I managed to re-take the mission from the NPC. At the same time, I had the newspapers with me. NPC did not give a mission without newspapers.
Having received the task, this time without being distracted by the gameplay (by researching systems), I immediately went to the Alpha system.
When I got to the UCHN Discovery sector, the mission ended. The window you mentioned did not appear. I have not used ESC.

I hope my explanation is complete enough and informative. It will help to make changes to the quest script to avoid similar errors in the future.
I am counting very much on the help of the administration in correcting the situation in which I found myself. When, due to an error in the mission script, the second part of the mission was completed earlier than the first and I did not receive a reward. 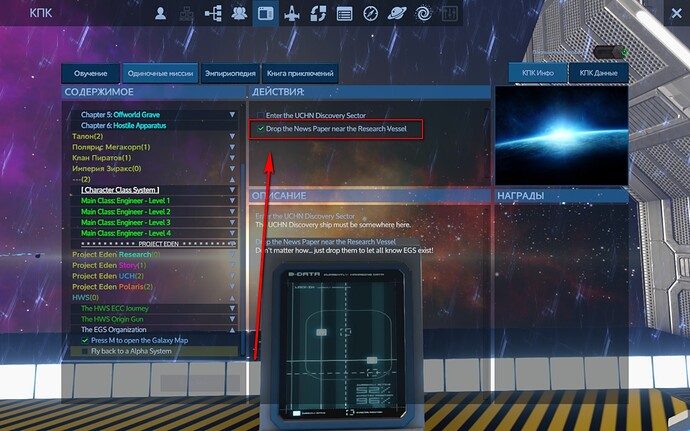 Thanks for your detailed explanation

The window you mentioned did not appear. I have not used ESC.

That was my question. I’m not sure what went wrong exactly then… as soon as you are online, let me know and I can help you.

Hi. I am currently online on the RE server.

Ok done. That the checkmark “Enter the UCHN Discovery Sector” is not marked, is very weird though.
You can deactivate that quest and IF it even triggers again, let me know.