Alpha EXP 4 release - the wait is almost over!

the EXP4 just got released:

[IMG] Update: April 26, 2017 We just released a hotfix that addresses another problem with uploading blueprints. We are sorry for the...

Thank you all for your patience!

Not so sure about the wait being almost over. “For everyone waiting to have a date for a public release right now, this might be bad news to have at least one Experimental stage still lying ahead of us, but no one likes to play around with broken stuff and waiting for the next major version, right?”

Some VERY welcomed balance changes though.

So much in this update!!

My favorite in this update

Haven’t verified the fix yet, but that was annoying.

I don’t like the new control panel, at all, but realize it’s a WIP.

don’t like the new control panel, at all, but realize it’s a WIP.

Would you be so kind as to post a screen cap? I’m out of the game for a couple days and wouldn’t love to see. 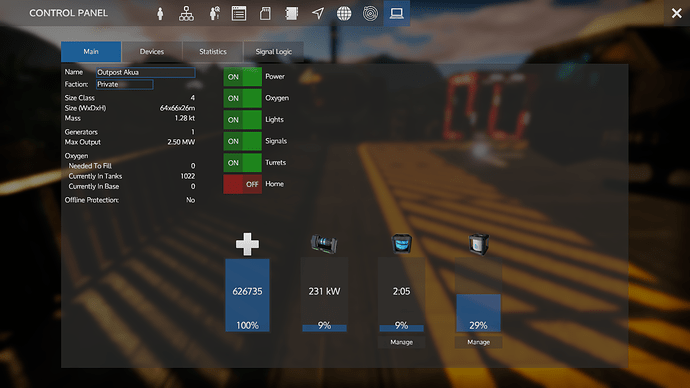 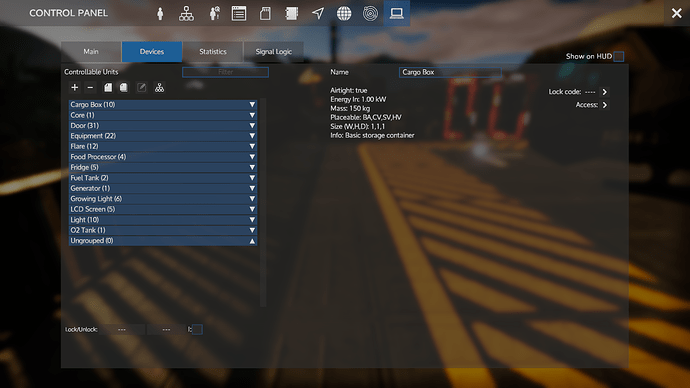 Thanks Krazzy!
It’s definitely a WIP, but tbh, as a newbie player this will probably be more intuitive and easy to use. I can see fewer questions about how to set home, how to manage the structures etc.

Will take some getting used to for the vets who learned with the old ways for sure!

I feel they need to add back the fuel/oxygen/health values to the devices screen at least. It makes it annoying to switch back and forth when trying to view overall health and health of individual devices.

I’m ok with the new tabs, but feel we should still get an overview on the devices tab too (there’s plenty of empty space for it.)

The new night vision is FANTASTIC however.

Indeed. That might be the WIP part! Hopefully the feedback makes it to their ears. If they can tighten up the “single lane of glass” concept then this could work well

Well i have said it before and i am saying it again. I love what they are doing but i feel sorry for them due to the fact that if you look in the server list you cant realy see any populated servers anymore. Not even HWS is crowded.

I have been playing something else due to the fact that we got told it could be soon and that it was time to OCD stuff. So So everyone did.

Im just hoping that the playerbase that i have had so much fun with over the last year will come back even if i dont think so.

Just a pointer. As a player i dont realy care about the wait, For exampel if someone told me in Januari that we wont get a release until June it would be ok. But instead the rumors have been running around saying 6-8 weeks from Januari.

Still i hope for the best and trying other games while i wait.

Yes much good chanceings but test your CV in 6.0.

They did killed the CV fights!

You cant fly with any CVs! unplayable

Yes, you are right.
The main battle now is 2 armies: where 2-4 main battleships with support of 10-20 good armored sv will fight with each other. Like Star wars, where 2 sides of battle, two location of spawns.

New fights are now depends from next critical success factors:

I have been wanting carriers to be a bigger part of this game since the first week I played it. But as long as cv’s can move as quickly as an sv, who would ever want to fly an sv with a fraction of the firepower and health? Now if we can just get movement inside moving ships, this may well become one of the best space combat games out there, while retaining the charm and appeal of the build/mine mechanics

Is there any consideration by eleon to make a mega server, comparable to the one in EVE Online? A server where thousands of players can interact in parallel in a persistent world?

I do not think private people (HWS crew) can do so without the support of the developers?

Also I see the development of the player numbers critically and it would be a pity if the HWS project ultimately only a handful of players can inspire.

Other games are specifically designed in this direction, and Dual Universe aims to become the biggest game in this gengre (next to Star Citizen).

See my previous post in german -> english
I think the changes are good! Now also SVs make sense again. Then only the adjustment to the speed is in proportion to the number / size of the thrusters or drives and the way in which these are installed. Ultimately, the speed should be oriented on the design of the ships and not limited (40 ms). A cap of the thrusters in relation to the size of the ship (number of blocks ect.pp) would then be necessary.

Agreed! I think they are making their way in nerfing CV agility, but likely taking it slow as big changes scare people away. I already see people complaining that CVs are garbage now. That’s going to need to happen to force the meta back to SVs for general pew pew and using CV as, well, as capital vessels. Big floating mobile bases that support your operations with some good nearly stationary offense/defense.

Ultimately, the speed should be oriented on the design of the ships and not limited (40 ms).

This would be good. But before they do that they need to get the physics right… i.e., it doesn’t make sense to have realistic physics for speed when you can stick a cockpit on a warp drive add some fuel tanks and 50 thrusters zipping around at 200m/s. Things that make the consequences of that design more critical would help ensure that it stays level and balanced. For now, speed cap keeps everyone on the same keel, even though it’s not realistic.

so, its not possible to hang a 600 tons Thruster on a single Block for example

or: limited thrusters vs. Blocks
or: more thrusters, more energy you must pay

Great concept. Si for CVs. Too much thrust may may your ship glass like