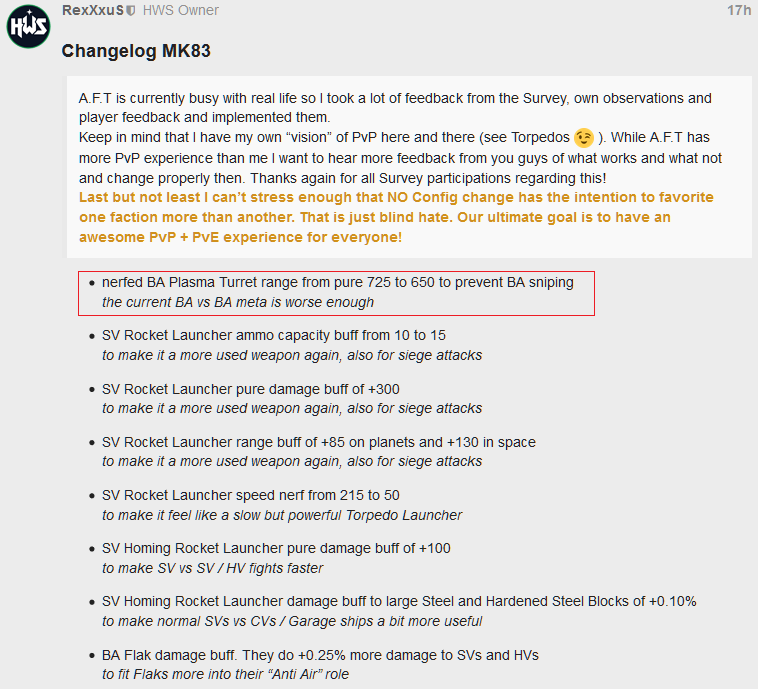 Love the improvements overall especially BA Plasma Turret. But sadly sniping has not been countered. BA turret ranges below are an example from Golden Globe environment. Since that’s the hot spot for PVP.

So good news, Sniping is still possible with BA Rocket Turret. Considering that you can also bypass firing rate on it such as the BA Plasma Turret. The BA Flak Turret has sniping capabilities too but does minimal damage compared to Plasma/Rocket. But damage is damage no matter what right. Flak ammo stacks at 500, so its spamable and usable for sniping

Thanks for that! I assumed it will be still the case already in my tests.

However we have to watch out between 2 things:

So maybe there are other ways against it. At least until Alpha 8 comes out with BA building by your own hands.

Any chance we can get the same buff to HV’s that the SV’s got? At least to the homing rockets?

HV’s are already in a good position, we don’t need them to get a damage buff.

If you get hit by those dumbfires in a hv your doing something wrong.

Macro’s aren’t even a requirement for firing multiple weapons extremely rapidly, i can unload all my weapons in less then half a second without one so bringing up macros doesn’t even make much sense.

Could say the same thing about SV’s.

If you get hit by those dumbfires in a hv your doing something wrong.

Because an sv of course cant just fly right into an hv and fire, completely impossible

. And HV’s never get stuck.

I agree with Abrum.

While overall the config has added to/improved PvP the SV to HV imbalance is getting worse with every config change. Please Rex please bear this in mind with AFTs future config changes

There a reason many use BA to snipe, the meta is being pushed this way bases are 98% cheaper to produce then a single hv/sv. HV are virtually useless to attack bases now dps is to low hitpoints for hv blocks and guns need to be buffed. When a BA can strip the hv guns within 15 seconds something is not right. Unless the goal is making bases unkillable.

A well built SV can take the turrets off a well built tank HV in just a few minutes - thats without these buffs. HV v HV is still fun but the SV/HV balance does not feel right anymore.

R u guys talking about the same game ? SV is weak compared to HV
And base is stronger vs SV and HV

is this the monthly cry fest were we all try to get what we want before the wipe or is there a actual point to this
thread?.

Base PvP sniping is cancer, job done we can all move on with our lives

It was a question posted for Rex regarding his recent changes, with some people having opposing opinions. The cry fest you’re referring to usually follows what the next season is going to entail.

Base PvP sniping is cancer, job done we can all move on with our lives

You cant get rid of base sniping, just now it wont be plasma’s doing it. If this was holding up your life, Im very sorry.

R u guys talking about the same game ? SV is weak compared to HV

And base is stronger vs SV and HV

I’ve seen your massive SV, and generally thats what your in. So i understand you want to have as much advantage as you can over a tank. That being said, a level playing field JUST where homing missiles are concerned isnt asking too much.

so he has nefed plasma sniping, to Rocket turet sniping thats what i read

Bring Back Armogedon start the craz!!

at least Raven will be happy lol, watching raven snipe bases is like watching a dog hump somones leg you
know you shouldnt but its just to funny.

I enjoy sniping enemy bases that set up next to me, but can only do it for so long until I get fully zergd by them.

Then again if it moves to rockets, its more expensive to do.