As the title says. CSW removed all my reputation points. On NA server, same name in game.

I did a CSW a few days ago and it removed all my reputation. I have earned 8 more since then but all the rep I had is gone.

So are we supposed to lose all our reputation points every time we use CSW? That doesn’t seem right.

Jascha is gone this week so we need to find out together what happened. I spent some time to understand what happened and tried to visualize the timeframe 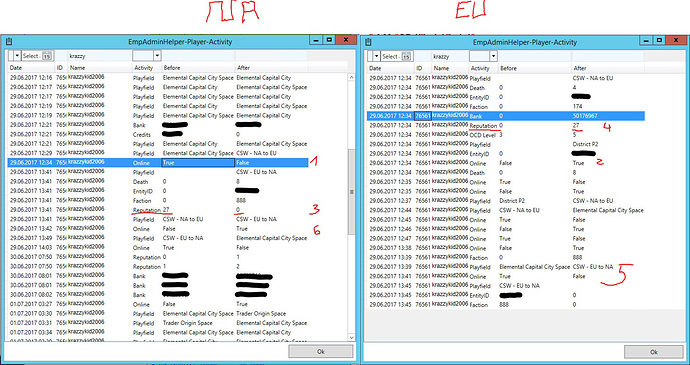 It makes no sense. The only legit thing what happened is that the tool had a problem in that moment. Our big optimizations came later online

Hey @everyone, alright here is a big update before the big “7th July” update. Just a short reminder: We full wipe on 7th July both servers to implement a new universe which will be a lot smaller and change a lot of other things along the way such as POIs, Weather, Resources, Missions, PDA, etc. Most common question: what will be wiped? the ONLY difference to any other full wipe is that you KEEP all of your Bank Credits now! Refunds of HWS ships can be given only under certain conditions…

But as already said:
Reputation Points DO carry over to the other server. After dozens of jumps I had never a problem with that.
Again see here what gets transferred:

Since we have two PvPvE servers (HWS EU and NA) we have implemented a way for you to play on both servers! You can warp from the HWS EU server to the HWS NA server (or vice versa) with your ships easily. For example: fly to the “Cross Server Warp” orbit and type the command CSW:Start:NA (if you are on HWS EU) to begin the CSW. Visit https://cmd.hws.global or check your PDA > Guide > HWS Commands or type csw:? for all available commands Condition: log in to the new server directly after …

We will refund the RP before the wipe then.