So, after spending days of hard work on my Capital Vessel, it seems the server doesn’t like it!
It’s Size class is 5, which is apparently 1 too much for the server…
I used 19.5k Blocks (which is under the block limit).

However, is it possible to change the Size class limit to 5? And (maybe) raise the block limit just a little bit?
It would be a real shame to just throw away my ship on which I worked for such a long time…

Would greatly appreciate that!

As you can see it cannot land on the ground, which means this ship would only remain in space. 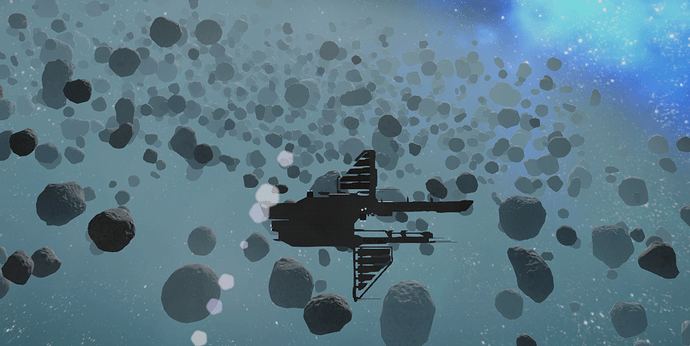 I already made a ship before that, however, I didn’t finish it since it had over 33k blocks…
I spend so much time on that ship, just to find that the server’s block limit is 20K…

It is not a block limit anymore that will be the problem. Chances are lights or triangles are your sticking points. Try removing all lights, then reblueprint. Then look for 6 way cylinder connectors, remove those. Then rounded edges. etc

Lights are weighed excessively heavily. Any lights you can strip off of it?

How much are you over? You can always add things back after you spawned it…it’s not a combat ship so who cares…

How much are you over? You can always add things back after you spawned it…it’s not a combat ship so who cares…

Are you saying the limit only applies to the stuff you spawn in?
So you can add as much blocks as you want after that?

Well…you shouldn’t…but nothing stops you.

The class thing is really for combat ships with pretty pony base ships being victims.

Awesome, I’ll try to get it back to 4 then… somehow
But for the same money that means breaking 1/4th of the ship. .

Alright, thanks alot for the help! (:

Still to complement the conversation, so I was able to test the limit of triangles blocks of the server in something between 130 thousand triangles and maybe 150 thousand, since it had a ship with approximately 190 thousand triangles and was blocked, but the lights were ok and the Devices too, I do not know for sure more than 190mil I know it is blocked, but I do not know the minimum value that starts blocking both lights and triangles, it would be good to do some measurements to have the exact number.

It is not a hard limit of each. think of it more as a formula with a weight to each. You can hit the limit stupid quick with just lights, less so with overall blocks or triangles. There is a formula rex throws around, dont know if it’s 100% official, but Ill try and find it.

Yes I looked at the formula, but even rexx can not say, if this was right for calculations, anyway, what I mean is that irrelevantly the blocks that you use, the question is that class 4 has a maximum limit of triangles that It supports even without lights, of course you can have a ship 40k blocks and not be blocked and have a ship 5k blocks and be blocked and what I’m talking about

I don’t have the post here but I seem to recall the triangles from fully meshed blocks (adjoining full combat steel blocks) adding to the triangle count.

If it’s not rendered it shouldn’t add to class size IMO.

@A.F.T did the test iirc

I actually really agree with this. It defeats the point of trying to cut down on rendered surfaces, if you charge as if all surfaces are rendered at all times. If anything that pushes people to make sure their limited amount of triangles are used to their maximum effect.

In these two topics have the most information, which we discuss and the block table also and two examples of ships with class 4 and 5, but with counting of different triangles …

1) Will the server remain at class 3? 2) Making ships "pretty" will have a high triangle count (as I have been testing in experimental branch, my current class 3 ships get kicked up to a new class 4 and 5 because I make use of clean lines and angled blocks), and thus will this change punish those of us that build ships that arent just for pvp, or just effective. Would it be possible to have a sliding limit? Say, each faction is allowed 1 class 5, and 2 class 4's, instead of having a parking lo…

What exactly are the ship Class and Block limits? HWS General Discussion

Hi. I'm just a bit confused as to what the ship limits are for blueprints and for the server, as going by the 5.0 guide and the new patch notes it isn't very clear to me. I understand that the Guide is yet to be updated. So the 5.0 guide says: Globally, there is a Class 4 Blueprint restriction. 20,000 Block limit for CV The guide then refers you to an empyrion forum post which says: Available Size Classes: * Class 1 = less than 50 devices * Class 2 = between 50 and 250 devices * Class…