How to exploit Offline Protection

Simply put offline protection IMO has no place in this game. It is way too broken to be used. It is way to easy to exploit and too many people know how to do it. Here is why. I’m flying around a PVP planet and I come across a massive base which is firing at me. I think rightly. Ok I found a target… Nice!. I mean its shooting at me. I can shoot back right? WRONG! B/c they are using Offline Protection exploits.

How? Well its really simple. They built at least two bases. First the bases are under water so you can’t attack them unless you are in the water layer anyway. But wait. you can’t get into the water layer b/c they have cover the entire surface of the lack with Base number 1. Which is not solid by any means. Just an outline of blocks with an offline protection. Under that base is a second base (or more) This base has a ton of flak turrets on it. It does NOT have an offline protection. That way when the faction logs off the top base covers the bottom base with an Offline protection umbrella. The lower base can shoot through the Offline protection of the upper base at people like me flying by or any attacker. But the Lower base can NOT be fired upon b/c the top base has active OP and is preventing “enemy” fire going past it to the second base with the turrets. Worse as I am fired upon I assume that I can fire back… If someone were not exploiting I would be able to. So I an no doubt many others take evasive action and return fire. Some times for a while before realizing that OP is preventing return fire. After all you have to be fairly close in order to see the OP field.

So Admins? Is this your vision of the proper use of OP? Its destroying PVP IMO and needs to be turned off again for good.

Here is a SWP base built by g1pz on Gold Federation. You clearly see the outline of the Offline Protection field covering almost the entire surface of the water while flack rounds are firing up through the field and I am unable to return fire on the flak. 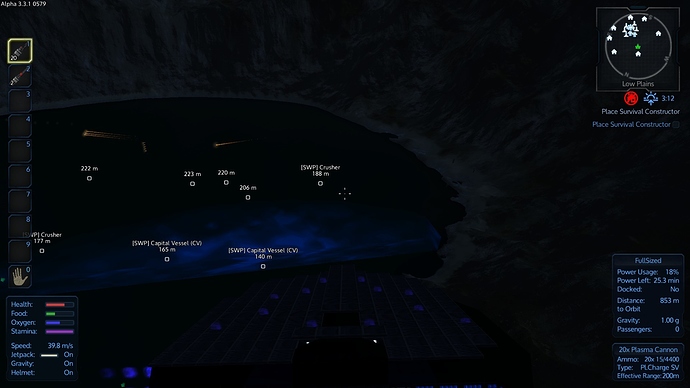 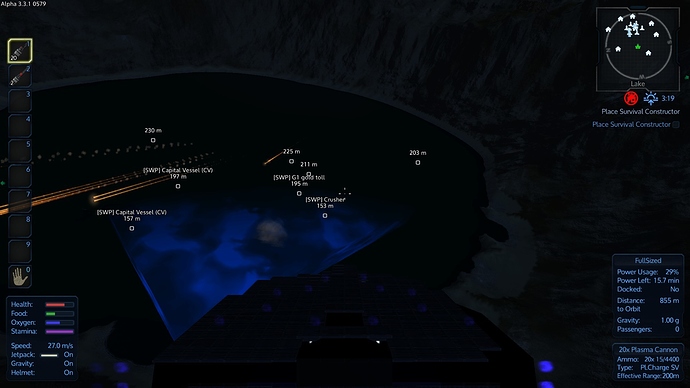 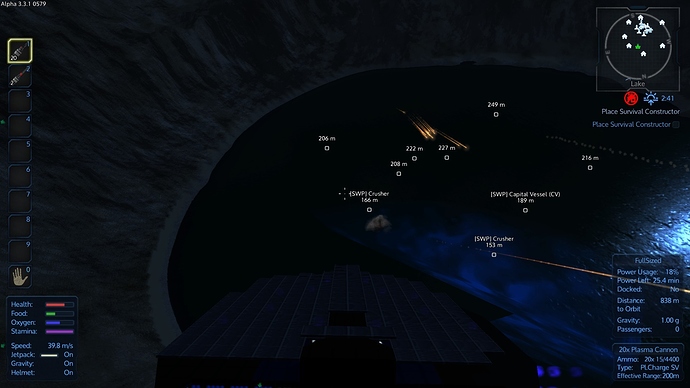 Yeah its so stupid, not sure why offline protection was put back in, but i guess there was some crying…

yes crying by people who wanted to exploit it

This is a bad way of using offline protection. However, if offline protection wasn’t on you would have destroyed the bases. It’s not hard. So what happens… Little build on PVP. Its pretty clear from the pic offline is on so as soon as you see turn around and look elsewhere.

Yes its harsh that the game allows the bases under. But the game also allows ammo drainers which happens a lot more. Which is worse. Both are playing unfairly.

To me it makes no difference, like If you think a base has OP go elsewhere and look… Its only 24 hours. Ppl can’t always log on. The guys who only like attacking offine bases (as they are easy targets) they are the ones who cry as there cowardly sneaky way of destroying bases is no longer available.

One last thing, aren’t you trader full sized? Going around looking for bases to attack isn’t trader like… Could that not be classed as an exploit…

Thats SOOOO weird as I am pretty sure FullSized was whining about someone picking up a loot bag after he died to a mob and vowed eternal vengeance in chat (screenies available) making a lot of noise about traders not attacking and yet here is a Trader actively looking for targets… Very conspicuous.

On OP. Its broken, badly and needs removing. PvP is broken so we might not get a lot of ppl building on PvP until the core game is balanced.

I do need to make a shout out to SWP who made a great base in a crater thus forcing attackers to fly up over the edges making guns very effective. Great build SWP.

It is not about crying it was about letting people build on PvP and reduce the overcrowd Peacekeeper problems.

On the one hand: success. Sneaky people who wants to raid “defenseless” sleeping guys get some buttpain.
On the other hand: still fail and can’t do much about people who combat logging off. But again this mostly affects small factions. Bigger factions are spread and have more problems to coordinate all of his structures.

I reported it already to Eleon and another success as announced before: we collecting only with this way feedback and can improve the game.

@rexxxus. You didnt address the fact that this was exploited. Are you saying the admins will allow the use of a base under a base to exploit offline protection? So we can plan to see more of these. Or is the server going to take a stance against exploiting a game mechanic?

@thispolak
Sorry if I missread some facts but can you please explain in detail what you think is the exploit in this case?

@rexxxus Two bases are placed. one WITH offline protection, one WITHOUT offline protection. the base WITH OP is placed on the top and is mostly hollow. its job is to provide a shield. the base beneath is full of flak cannons. now since the base below has flak and no offline protection it fires 24/7. and since the base above has OP and is hollow . the flak travels through it but you cannot attack the flak. making it an invincible base that can attack you but you cannot attack it. it is basically the hannah montana of empyrion. best of both worlds. offline protection, while still being able to attack people flying by while offline. these are placed near gold deposits so even if the perosn is offline, the gold deposits are attacking passerbys.

So my question is does the server see this as an exploit, if not then I foresee many choosing to use this “game mechanic” to provide an extra boost to their arsenal

Agreed here. This is exploiting the fact that OP covers everything including a non-OP protected base.

Lets not derail the forum topic. This isnt about offlije protection but more about a faction exploiting a game mechanic for personal gain. The discussion of OP or no OP needs to have its own lengthy post lol. This is more about should you allow this behavior.

If so then yea im building a bunch of cvs eith hvs and dropping them on bases. Because fight fire with fire.

Let us know so we can adjust our game style accordingly

Needs an admin call tbh. I see an online base within an OP base as cheating tbh as it negates the negative effect of OP. CV I kinda think the same, devs need to ensure all cores within an OP field are disabled that would fix the HV issue.

Base is more difficult as I can technically put one base below the other such that the active base isn’t in the field of the OP base.

But what all of you have to think about and stop in your mind is: yeah, the OP is working in this way

Again it is:
#OFFLINE -
Protection.
Exploit would be if you are able to BREAK the OP and take out the turrets which shooting at you. But since you DON’T belong there anyways because the guy is OFFLINE it is just a clear way of them to say: “stay away from me”.

That is ONLY about the OP itself.
Now we come to your ways:

they can just go to an base and logoff, and let the hv’s do their work on the base

So 2 good learnings which got addressed to the devs. Sorry, if I want to help them to identify problems Sarcastic-Thranir.
We will propably turn the OP off again till it is in a better state.

This is ridiculous response rex. No offense but cmon. They are offline so I shouldn’t be there anyway? I DIDN"T KNOW THE BASE WAS THERE. Its not like I scouted it out. waited for them to get offline and went back to take out the base. I was just flying around the planet mining. The flak started shooting at me before the base showed on my radar. B/c the base was also under water there was no way to see it coming up ahead of me like I could have it if was on top of the ground. By the time I knew it was there I’d already taken some serious damage to my ship. Now you telling me I shouldn’t be there? WTF. If he is offline I should have been able to fly by unharmed. So yea. If the base is shooting at me I have every right to return fire and do some damage in return for the damage I’ve already received. Its a PVP planet and you are going to tell me that a base I can’t see yet has a right to shoot me down but i can’t return fire b/c they are offline and exploiting to get their guns to fire through OP?

LMAO how how easy it is to change history to make yourself feel better. And yet another person claims to to have screenshots as proof. If you actually do have screenshots which i doubt and you post them all everyone can see that I came to help you as you were dieing to bugs over and over and over. After I died trying to safe you, you took advantage of my kindness and looted my bag. I also made it very clear that while i didn’t care about the loot in the bag that what you did was rather rude considering I’d come to help you and that you would be KOS from then on. Not b/c I was mad but b/c you had attacked me. You then went on to play word games about what an attack is and I made it clear that regardless of the fact you hadn’t damaged my player that I consider stealing my guns on a hostile world an attack. I still dont care that you dont agree with that and I will continue to kill you any time I see you. No vengeance. No malice. Just a response to your initial attack.

Oh and as you very well know since I didn’t kill you on that pvp planet but rather tried to help you initially I wasn’t looking for targets. I was just mining. I found the base in these photos when it shot a wad of flak in my face before it ever showed on radar. After which I scouted it and found that it had employed an Offline protection exploit.

Your intentions are irrelevant - you are also hilariously funny - carry on

Traders - or people who abuse this Faction Tag

P.S. I am also interested in this new change history power you say I have… Must investigate further

I think the OP should be reworked completely.

It shouldn’t even be that hard to program this as most of the required tools are already there. The base / ship already has a unique ID. Connected blocks already have a certain amount of Hit Points. There’s already a PVE flag that prevents damage to blocks from other players. It’s simple matter of adepting a few things to get this to work.