…And here we go again!

For new players who are unfamiliar with the Kill board, this is a HWS feature in the connect app. When you first log in you can see the list of the most deadly PvP players for the season to date on each server. This gives new game play for those that want to be seen as the HWS top Gun, and for those PvE player, it provides a clear list of the players to avoid at all costs!

The purpose of this thread is to highlight and prromote this onging competition within the HWS universe.

One week in to the new season and the PVP action is starting anew. Some new names, some returning Aces and all to play for…

Anyway - here are the week one standings: 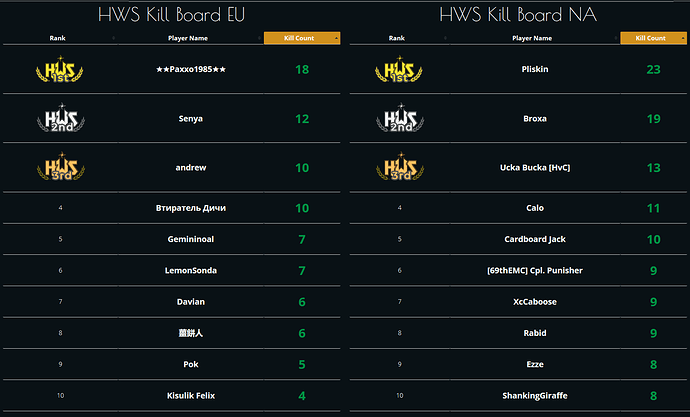 A change in the old guard from last two seasons, with @Daddystu not topping the table!

@Paxxo1985 is the clear leader, making a great start tot he season, with Senya and @andrew completing the top 3.

Втиратель Дичи, @Gemininoal, @LemonSonda, Davian, @anon76082228 fill the remaining spaces. (my apology for the oriental script named player - I can not get your tag to paste into this post!)

A very familiar feel to the top half of the leaderboard! With Pliskin @Broxa, and Ucka Buka topping the table. (Guys what is your forum tag - as when you change your name I cannot find you to post an @)

… So only one week in with plenty of time for every position to change - good luck all and enjoy the season! 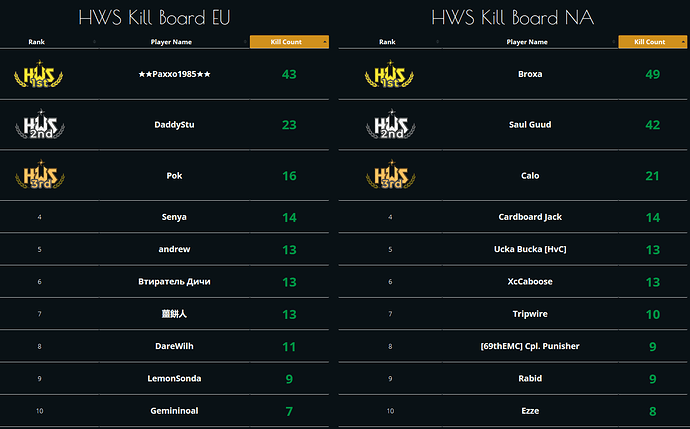 @Paxxo1985 remains firmly on the top of the leader board and has established a clear gap between 1st and second place, with almost double the score to date!

Darewith is also a new entrant to the leader board

It is only week 3 of the season, but will anyone challenge Paxxo for the leadership? Certainly at this stage anyone can claim a place on the winning podium, so watch this space!

@Broxa holds the pole position but Saul Guud is within touching distance. At 49 kills Broxa is also the highest scoring player across both servers currently.

@Calo is holding the 3rd place spot (from 4th place), with a gap between Calo and the chasing pack…

@Remove has moved up one place with an eye on a top 3 spot, Likewise @XcCaboose has also move up a place…

@Tripwire is a new entrant to the leader board

@ShankingGiraffe has dropped off of the leaderboard

So quite the competition on the NA server! With the season only in its third week, there is plenty of time for players to claim a top 3 finish, will you be there at the end of the season…?

Its not a good thing. Me (1st week) and Ucka crushed it first 2 weeks, but there is an exploit out there to lag shot cockpits.

Ezze you may want to read up on how the leaderboard works.

This is not true at all. In fact many kills were not even being counted earlier in the season…

Its not a good thing. Me (1st week) and Ucka crushed it first 2 weeks, but there is an exploit out there to lag shot cockpits.

Camping noobs in the lawless starter is not crushing it

Dont worry about it, I am sure it will all come out eventually.

As for noob killing, most of my kills were not against noobs. Just poor unfortunate souls. Also we did crush lawless starter! Got to kill noobs and do POIs, explore.

The admin team have made adjustments to the killboard system mechanics since last season, which reduces the possibility of player kill “farming” greatly and made the scores recorded much more valid. At this stage in the last season, the leading players had 3 times as many recorded kills (not saying that they were gained by exploit - as it was then possible to multiple kill the same nube who respawned in front of players repeatedly).

If there are known exploits to the system, or abuses, please share with the Admin team, or if you want to do so anonymously feel free to DM me (and I will collate and forward info to the Admins). Can’t guarantee that every loop hole can be closed but it is everyone’s interest to mitigate the possibilities!

Would be wonderful if tracking kills could differentiate tracking by handmade kills (player weapons or sv) or autoturrets kills. (cv or hv)

Being a survival game I would like a kill:death ratio column aswell but we cant have everything I guess

Anyway, in the interest of the community I shall not respond to you further here - just as in-game.

Please keep your petty, juvenile trash-talk attacks for someone else. Quite frankly I pity you and pity that once honourable, proud faction you’ve corrupted.

I like when you and your faction make unfounded attacks as usual just to put in bad light people, see you in game.

We recommended log out timers in the past and present. We’ve recommended all kinds of pvp ideas, it doesnt matter. Certain people have rexxus’s ear and thats the politics of the server, end of story.

I am playing other games presently till someone figures out the exploit. You’re also right not everyone is using it, but wrong at the same time there is people using it. I dont even know who paxxo is, are you offended by me suggesting there is an exploit out there in pvp? WHEN THERE IS. haha.

We can call it a game bug or an exploit… I think its called an exploit when certain people are using it intentionally. Thats exploiting?

I dont know, have fun.

Ok time for the next update, what has changed in the last 2 weeks…? 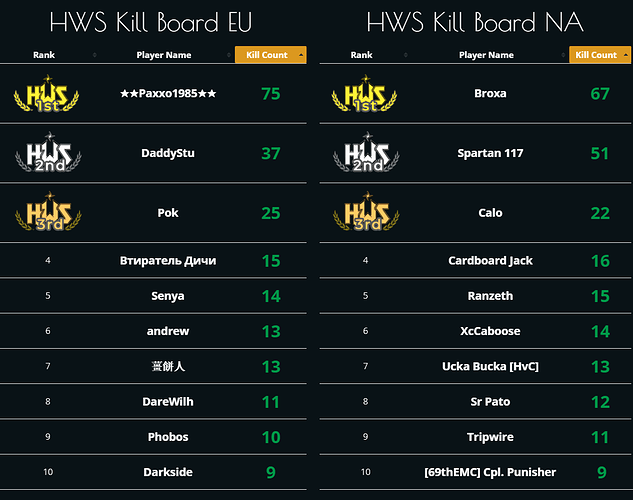 …Well @Paxxo1985 has now extended his lead, with a score that is double the second placed player, definitely the one to beat now, as the lead is not quite unbeatable, but it will take a massive effort for anyone to catch this seasons EU leader.
@Daddystu& @anon76082228 have moved on too and are a strong second and third respectively.

Not a great deal of movement in the chasing pack with 薑餅人, Senya, Втиратель Дичи, Andrew and DareWilh all very close to each other.

@Gemininoal and @LemonSonda have dropped out of the chart, while @Phobos and @Darkside Both enter the top ten.

There is still a lot of time left for this season - but will anyone challenge for a top 3 place in the coming weeks? - Well I’ll post an update in a couple of weeks time and lets see…!