Dear HWS Community @everyone
I mentioned it here and there already but I think it’s time for an official big announcement:
We are looking for a dedicated HWS Garage Master!

After I invented the Garage ship system 5+ years ago the very first Garage ships (https://forum.empyrion-homeworld.net/t/hws-garage-new-feature-and-structure-commander-upgrade/4552) (for example base turrets on a CV or a Furnace on a SV), it became very popular. Other servers grabbed it (even sold such ships for real money) and for you players it became sometimes even one of the main reasons to play on HWS.
It’s a great economy sink, it spices up PvP and PvE and is overall something achievable.

However, since the game added more and more stuff in short period of time, our old ships became obsolete and we couldn’t keep up to update them fast enough.
Especially because I’m not a ship builder *(I wish I were but I’m already overloaded with other things) *and Ju also rather focus on POIs and Story missions.

So if you are serious about it, love building ships and dive deeper in managing the HWS Garage feature by your own as good as possible, apply here please: 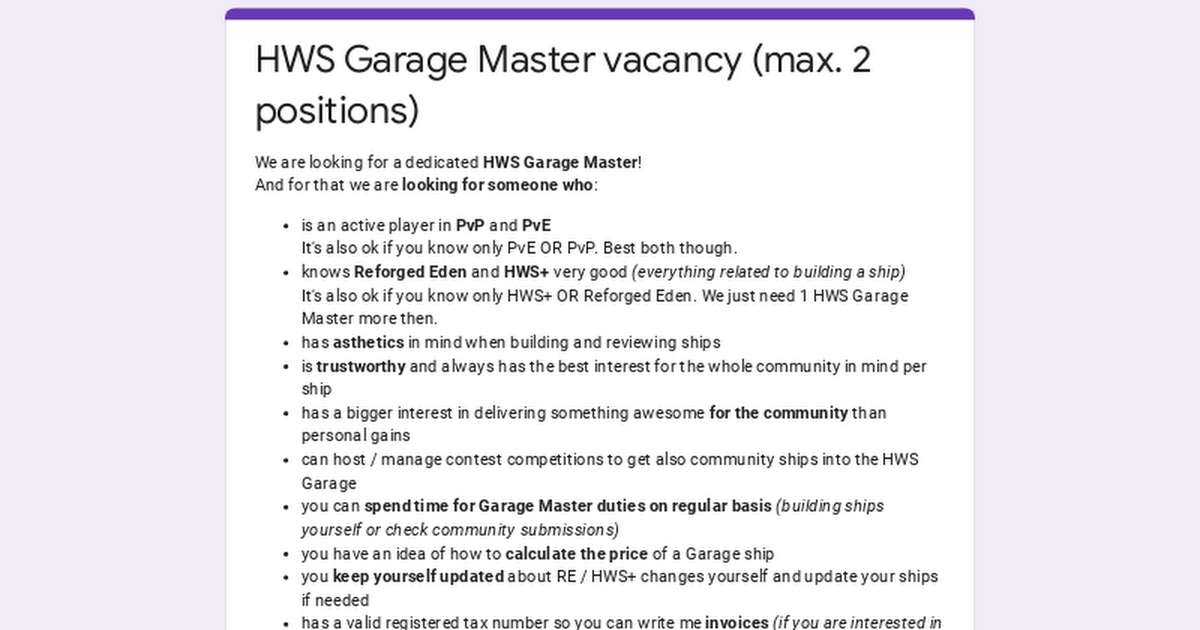 We are looking for a dedicated HWS Garage Master! And for that we are looking for someone who: is an active player in PvP and PvE It's also ok if you know only PvE OR PvP. Best both though. knows Reforged Eden and HWS+ very good (everything related...

Thanks a lot in advance for your submissions!

would love to see specialty “garage only” devices. ie, SV furnace/advanced constructors, long range scanners, enhanced RCS/thrusters. an atm and armor repair station for SV/HV would be ideal. basically instead of copying and pasting a high mass CV/BA device on an SV/HV, have lighter versions that are restricted to garage ships only and cannot be removed with a multi-tool.

I will double check my schedule and see what kind of commitment i can offer. I too really miss the unique builds of the hws garage ships, and they could really be used to bring a balance to in game economy.