Really not seeing 3 times asking abn, there is one. Or any way that this could possibly be taken as anything but directly taking someone out of pvp right out from under someone actively killing them.

I appreciate the help you have given me and other people in the community, but you should not just trust a player’s comment, especially if they’re in a pvp zone… verifying and understanding a situation before you use your admin powers is the most basic, fundamental responsibility as an admin.

i was unfortunate to witness most of this event from the start. this is a tale of one player not being prepared to enter PvP, getting killed, then respawning over and over complaining about being constantly killed. terms of right and wrong are both skewed by play style, personal background, and many other aspects. is it wrong to assume the action will just stop because one calls “time out” so they can get their backpack? is it wrong to play the “quit hitting yourself” game with that person? is it wrong to ignore advice trying another option. is it wrong for someone trying to end that madness with the fastest possible solution? lots of things here went sideways due to stubbornness on all sides. i am not sure how to get past this without making some or many pissed off players. all i do know is the longer this progresses, the worse it will get…

Nah, I want Rex’s opinion on this one, publicly.

why is it so important for you to take me down? because that is what you are doing now!

dQ, mate, I just want Rex to give his feedback and opinion on the subject. I’m done replying so Rex doesnt have to read a flood of text.

that’s the thing. rex has lots of things he needs to attend to. arbitration shouldn’t be one of them. he is best at inventing new ways to kill each other in the most enjoyable ways possible.

we only assume the facts we don’t know. mistakes were made and apologized for. this is truly an isolated incident and not sure what needs to be gained by involving a server technician to settle a squabble we should be capable of by ourselves. u all know how i feel about any public request for punishment. from the conversation given here, a community helper jumped the gun to help someone without having all the facts. this is a volunteer position. not a contractual paid employment. not sure what else needs to be discussed. most of us here know what it feels like when the mob thinks we are Frankenstein’s monster

Guys everyone make mistakes. We’re all human. Every human has bad days sometimes, and every human can get angry.

dQgn might have made a mistake. But he already apologized and offered to let you kill him instead.

If that guy dQ was helping, needed help then I’m gonna assume the reason you wanted him dead was to increase your kill count, and that’s exactly what dQ offered you as apology.

To the comments basically saying “He already apologized, let it go”

We didn’t make a big deal out of this. We saw a rule being broken, and we reported it. Are we in the wrong now??? The only person who has blown it out of proportion is dQ. He has made it out like some personal attack against him, when all we are doing is holding HWP accountable. Not to mention how he has gone through multiple HWS discord channels tagging and arguing ABN over this (he later deleted). He also has DMed almost every ABN member while drunk accusing us of personally attacking him with this ticket. He even went so far as to threaten to find and message Chaotic on Facebook over this and then asked in HWS PvP Chat for someone to give him Chaotic’s phone number (Screenshots have already been submitted to Rex).

We didn’t make this ticket for HWP to come in and downplay it. We made it so that there is transparency on the actions the HWP are taking in game with their authority.

your blanket condemnation of all ABN members aside, you should get some rest and start over the discussion tomorrow… you’re overreacting to a lot tonight and making this worse. get some sleep, be safe

Hi, I am new to this server, (end of last season). I’m in my 50s and been playing games for longer than most of you sods have been alive. I have read this twice now and I have a few points.
In PVP when someone dies and re-spawns there should always be an exclusion zone around them to collect themselves and think of a new strategy. Spawn die, spawn die spawn die is a stupid process that just infuriates the player base and lowers the content of any game. Although going to a PVP area without safeguards in place is your own fault!
This moderator/ police guy really needs to take a chill pill and not be posting like this time after time. Each post make the situation worse. Never have a public discussion like this. If something goes wrong obviously apologise and take a bit of time to make one public statement on what happened, what went wrong, and how things are being implemented to avoid this situation in the future. Thank the community and end right there. Thats it no more.
Players can post what they want and should thats how you get feedback but never ever do this again, it belittles the whole server and makes it all look very unprofessional. Take this as an early day learning curve of HWS. Players will always abuse, be toxic or just dicks. HWS can never be seen to be any of this ever.
I would advise this whole thread to be deleted because its just embarrassing and it will serve no one any good in the long run. Lets all learn and move on.

Based on my understanding:

If that’s case dQ did the same thing which cb:gohome funcion would have done, player was killed already, lost all vessels and inventory, therefore I think dQ did nothing wrong.

New players entering PVP and learning by dying a few times is how they get better. All players and factions that PVP often help players that they have shot down or killed offering a way to get off the play field.

In this ABN have constantly offered help as a faction “yes there will always be the salty player” but it’s in the best interest for pvp factions to give these new players a chance to return, improve and try for a bit of revenge.

HWP observe and should observe till a rule is broken, and apologies have been given so we move on.

I’ll restate my point since it has been buried under all the other comments.

I just want the HWP held to the same level of standards as anybody else on the server.

dQ intervened in a PvP scenario, when the individual still had options in regards to spawning.

Now, with the amount of drama that has ensued after making this post, I personally believe something should be done in regards to dQ. The way he handled the incident, by assuming that I am not of sound mind, or that I am in “danger” and need help.

Messaging 10+ ABN members about the incident, damning an entire faction due to the actions of one person… 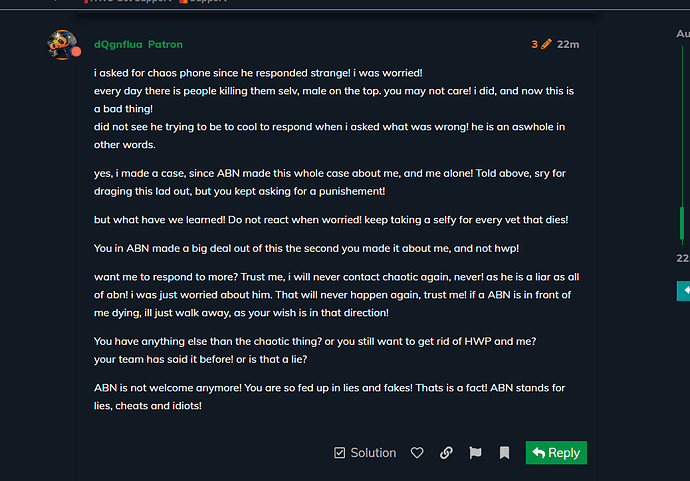 That’s no way to handle someone reporting you. I’ve been reported probably 30 times at this point, one leading to a ban. and have I ever called all of HWS anything? No.

exactly my point. this has gone way too far. it should have stopped by mike choosing a different spawn point. there was no need to squash this ant over and over just to point and laugh at him. sry but i feel spawn killing over and over is truly a dick move as it only serves as trolling. the unarmed kills don’t really mean anything that matters. think of how this makes the ants feel. most don’t care. lots of things were done wrong here. so in fairness, either all involved should be held accountable or this should just end here and stop making the community look bad. there is no need to drag us all through this mud.

But spawnkilling isn’t illegal. HWP intervening in PvP, however, is.

With Spawn killing over and over there is a point where all its going to do is make a player rage quit the server and players go back to complaining theirs no players in pvp.

Theirs a point where it’s time to back off and offer a way out.

this is not about rules. we both have broken our share of them. sometimes getting away with it, sometimes not. mistakes were made and apologies. not sure why this has to go any further. a punishment is not needed when someone feels true remorse and apologizes. now rex has to waste more of his precious time reading through this and make some kind of statement as requested. there is absolutely zero need for him to be involved with everything we do. i am certain he didn’t start this server to play teacher of the playground. can we get past this?

Alright, that was a lot to read.
I try to make it as quick and transparent as possible.

@dQgnflua broke the most important rule of the HWP philosophy: do NOT step into PvP like that!
The exact details don’t even matter, because it is a precedent to all sub actions, this might impact.

Then a lot of trash words were sent (making it even more worse than the PvP incident alone), maybe drunk, maybe emotional, but also not acceptable as representative of HWS.
HWP can be seen as “right hand” of me, helping me overall. But they are NOT “Admins” (and they should not label themselves as admins either to reduce confusion of this very powerful “admin” meaning). Hence what he said here and there has no impact of the true meaning of HWP or HWS. Learning the circumstances I will let it go through this time for him. But some sentences were really ugly and I won’t tolerate a second time of this.

So, the words he wrote is his business, he mostly apologized I think. He has to regain trust here and there or realize that HWP is not what he really wants, if he has personal grudge against someone. HWP is and should be always neutral to everyone.
I will give him time to think about that.

Until then, I revoked his HWP commands. For unpredictable time. He can still help people with his ships and resources under the flag of HWP.
(I updated the HWP Commands abilities in the Rule Guide)

dQ is a nice guy and I am really thankful for all his help, sympathy with players and overall attitude giving his best, even on a laptop on his boat. I still believe in him and let him do one last time what he can do good, helping new players and being positive, motivated, helpful towards HWS.

About the underlying issue:
I found out I can of course also change some GUI text, so I removed this confusing “Fresh Start” on the death screen wording with something better!? 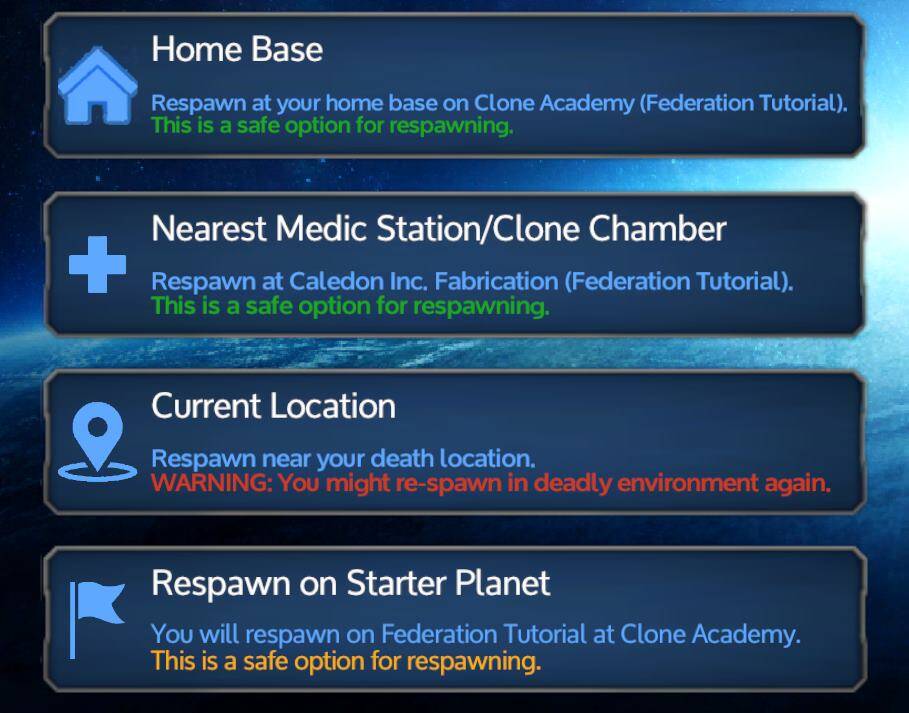 image909×713 76.3 KB
I will make more changes about it - ideally removing this “Spawn Nearby” logic in PvP all together.

I’m closing this incident here for now and work on improving the situation as good as I can.