Player kill board - who WAS be the best this season? (SEASON END UPDATE)

I feel that one of the recent innovations that RexXxus introduced to HWS connect is the player kill board (league table).

For some players the competition to top the table in their respective server is motivation for playing on HWS on its own. (It is just one of many ways to enjoy your unique HWS experience).

For fun I have posted the top ten standings on both EU and N.A. servers at the end of last season (7.0). I will post the latest standings each week in the current season to this thread so we can track the progress of the most feared individuals on the servers. (perhaps some spreadsheet anaylis may also be fun…)

Anyway, good luck to all who are fighting to top the leader board - and for everyone else, make a note of these names, as they may be after YOU! 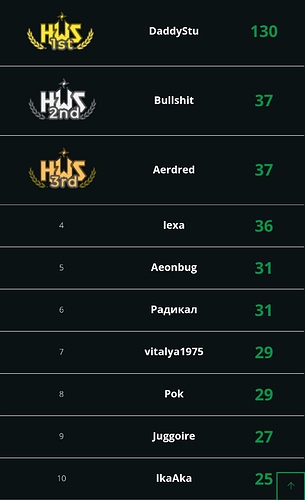 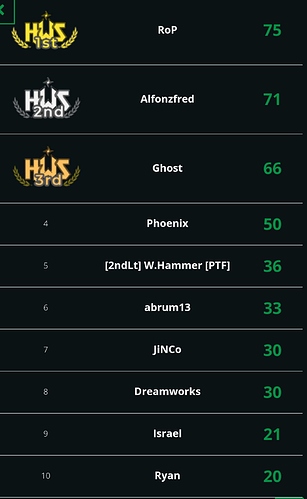 Thanks for screenshotting it! Great.

The Top 3 of each server will get rewarded this time as well as announced.

Reward given as soon as I have time:

No reward for my 5800+ kills? I slaughtered all those Zirax for no reason?

One week into the new season and we already are seeing the early runners in the player kill board top 10 chart… but who will be there at the end of the season …? 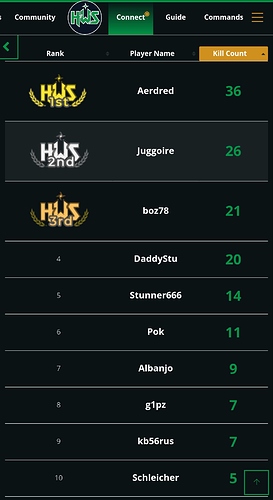 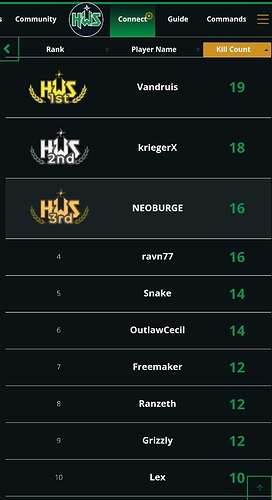 OK this weeks update and you can see several movers and new entry’s into the player kill board top 10 chart… It is certainly an open competition, anyone could top the end of season standings…

New Entries to the chart: @jedimaster Broxa and @Wiseman738 being the highest new entry this week!
Drop outs from the top ten: @Konstantin @Schleicher and @Albanjo - perhaps next week will see a return?
@boz78 is the new leader, with Daddystu climbing as well.
@Aerdred are you going to regain your “crown”?? 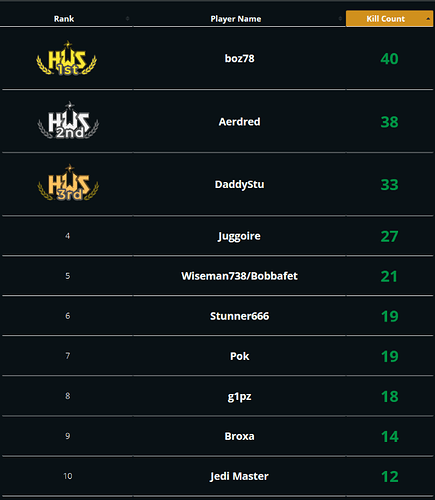 New Entries to the chart: @Crewmember123 with Phantomfade the highest new entry of the week!
Drop outs from the top ten: @outlawcecil and @Freemaker - perhaps next week will see a return?
@Vandruis continues to lead the field but Lex is close behind and is this weeks biggest climber…
@Snake @Ranzeth all move up the ladder whilst @Quasar @ravn77 @neoburge and @krieger50 all drop down. 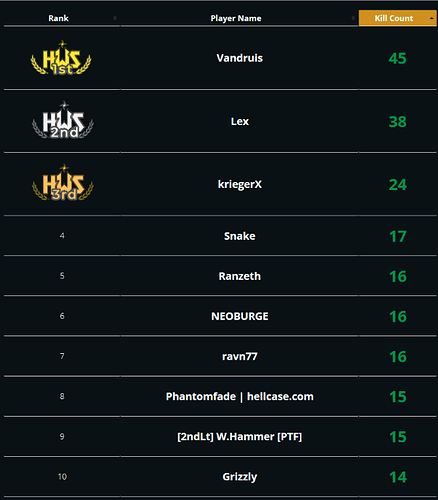 Kills should not count until you leave the starter. Lex is the terror of Cryo L1 but not a serious PvPer.
Perhaps if killing someone in the top 10 counted as 10 points…

maybe i should cb:freshstart and go and terrorize rex

Both really good points to raise:+1:, I expect there are many ways like you mention to improve this element of the server gameplay.
I had not been thinking much beyond putting some time into raising the awareness and visibility of this feature of HWS, so it is great to see ideas and suggestions that RexXxus can consider to refine.

suggestions that RexXxus can consider to refine

My first suggestion would be to split it up by origin.
Reasons:

I am thinking the same.

Players with over 100 playhours after a fresh wipe on Cryo L1 are forced to leave the system or at least not visit the planet anymore to "farm noobs!

maybe i should cb:freshstart and go and terrorize rex

Have fun doing that.

In HWS 8 Starter planets are excluded for that though.
We might implement other methods to detect fool game as well. At the moment it isn’t really that bullet proof and I check on occasion if you cheat on the system.

You ruined my night of terror, and fun!

For the edification of those who might think that I’m “cheating the system” Can you prove openly that, no, I am not killing alts or abusing the system?

It’s getting annoying to hear it in global every day from a certain few players.

Look at @Daddystu !!! A massive increase on last week to move firmly into the top spot.

@CHAR is a new entry to the leader board and Broxa drops out of the top ten.

@boz78 @Aerdred @Juggoire @Wiseman738 all fall down the board this week. 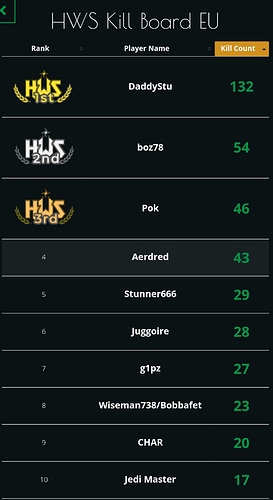 @Vandruis pulling ahead… Lex still in second, without recording any kills this week…

… and Broxa having left the EU leaderboard ahs now entered the NA Leaderboard straight into the 3rd place position!

@Crewmember123 has climbed the board with…

Those dropping down the standing are: @krieger50 @Snake with…

… @Quasar -Phantomfade -ravn77 all slipping off the leaderboard this week.

Can anyone catch Vandruis??? Happy hunting all! 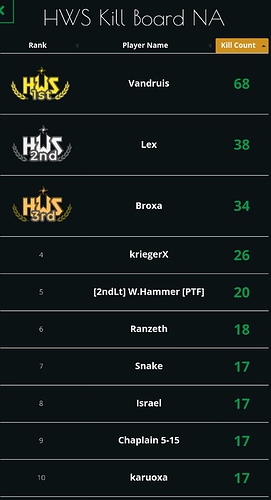 The question is, is anything gonna be done about Stu’s meet&greets and alt-farming?

I’m all above board. A better question would be can anything be done to stop ammo drainers? Paid 500k and 5RP for egs:noguilty today due to 2 alliance origin guys in BH. Expensive this hunting business.

Little movement in the other places, except @CHAR climbing several places and @jedimaster dropping out and @Hedge3 entering the chart 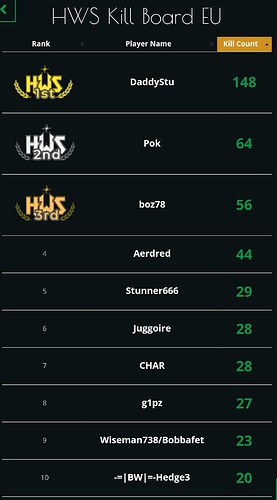